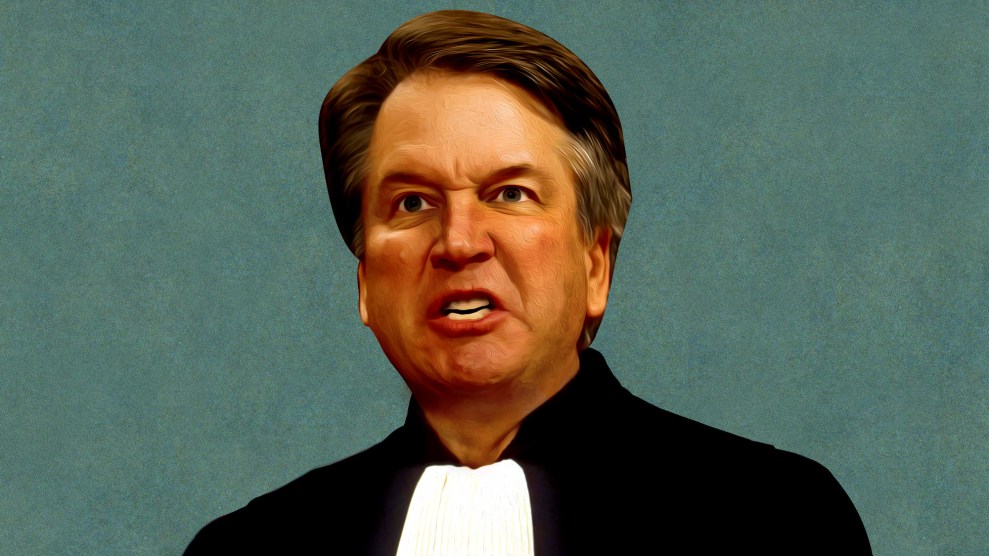 The closeness of his confirmation vote is unprecedented. Kavanaugh won even fewer ayes than Justice Clarence Thomas, whose 1991 confirmation hearing was threatened by allegations that he’d sexually harassed Oklahoma law professor Anita Hill. The Senate confirmed Thomas 52-48, with 11 Democrats voting to approve him. Today’s Kavanaugh vote was notably more partisan. Only a single Democrat voted to confirm him—West Virginia’s Joe Manchin, who is up for reelection in a state where President Donald Trump beat Hillary Clinton by 42 percentage points, his biggest electoral margin. (Sen. Lisa Murkowski (R-Alaska) voted “present” Saturday so Sen. Steve Daines (R-Mont.) could attend his daughter’s wedding.)

Kavanaugh, currently a judge on the DC Circuit court of appeals, was a political operative in the administration of George W. Bush and worked for independent counsel Ken Starr as Starr investigated President Bill Clinton’s relationship with intern Monica Lewinsky. Kavanaugh’s partisan background made him one of the most unpopular Supreme Court nominees in recent history, as did the prospect that he might provide the fifth vote to overturn Roe v Wade and end the right to a legal abortion in the United States.

Ford’s testimony left women around the country literally weeping in front of their televisions.

Even so, Kavanaugh’s confirmation seemed all but assured until September 16, when the Washington Post published a blockbuster story about California psychology professor Christine Blasey Ford, who alleged Kavanaugh had tried to rape her when they were teenagers in Bethesda, Maryland. After days of partisan bickering, Judiciary Committee chairman Chuck Grassley (R-Iowa) finally agreed to allow both Ford and Kavanaugh to return to the Senate to testify about the allegations. Unlike with the Thomas hearings, which were also reopened after Hill’s allegations became public, no other witnesses were allowed to testify.

Republican were so afraid of a repeat of the Hill spectacle, in which senators attacked Hill and angered a generation of women, that they brought in a “female assistant,” as Majority Leader Mitch McConnell (R-KY) described sex crimes prosecutor Rachel Mitchell. Mitchell asked questions on behalf of the all-male panel of GOP senators, some of whom, like Utah’s Orrin Hatch, had also presided over the Thomas hearing, while Democrats did their own asking. Ford’s testimony was riveting and left women around the country literally weeping in front of their televisions. It was so compelling that President Trump was reportedly furious she was such a credible witness. (Republicans eventually jettisoned Mitchell after realizing they were missing opportunities to grandstand.)

Kavanaugh fired back with an angry, partisan screed in which he blamed a vast, left-wing conspiracy, including the Clintons, for smearing his good name. He appeared to dissemble in response to questions about his drinking in high school and college. The performance prompted everyone from the American Bar Association to a bunch of nuns to the dean of Yale’s law school, his alma mater—along with thousands of other law professors—to call for a halt to his confirmation, in part due to questions about his temperament and fitness for the bench.

The Senate was poised to vote on his nomination within days of the testimony, but Arizona Republican Jeff Flake, who is retiring this year, joined with Democrats in demanding a brief FBI investigation of Ford’s charges. For a moment, Kavanaugh’s confirmation seemed in serious jeopardy. But after a perfunctory investigation that did not involve questioning either Kavanaugh or Ford, the FBI submitted its report. Senators read it in a secure room on Thursday, and on Friday, voted to move the confirmation forward. Protesters had disrupted Kavanaugh’s initial confirmation hearing, and they swarmed the Senate office buildings in the run-up to the vote, pressuring wavering moderate Republicans and red-state Democrats like Manchin to reject Kavanaugh.

Protesters, many of them sexual assault survivors, seemed to influence the decision of Flake to push for a delay in the confirmation vote, but they seemed to have little effect on one of the most critical undecided Republican voters: Susan Collins of Maine, who after a long speech on Friday, declared her support for Kavanaugh, along with Flake and Manchin.

To avoid any more scandals breaking out, officials are likely to push for a speedy swearing in.

Although the voting is over, Kavanaugh won’t officially become a Supreme Court justice until he’s taken two different oaths of office: the constitutional oath swearing him into government service and the judicial oath, usually administered by the chief justice. The Trump White House is not likely to take any chances that other, more damaging information about Kavanaugh may emerge before he’s officially ensconced in his lifetime seat. Officials are likely to push for a speedy swearing in, as they did with Clarence Thomas in 1991, when the administration of George H.W. Bush asked a grieving Chief Justice William Rehnquist to swear in Thomas a week ahead of schedule—and one day after the funeral of his wife of nearly 40 years.

The surprise swearing in reportedly quashed more stories in the Washington Post about Thomas’s porn habits, which had been an issue in Hill’s allegations against him, but wasn’t fully vetted by the Senate. They were only fully revealed three years later by Jane Mayer and Jill Abramson in their book, Strange Justice: The Selling of Clarence Thomas. Notably, Mayer has been reporting on Kavanaugh recently. In The New Yorker she and fellow staff writer Ronan Farrow broke the story of Deborah Ramierz, one of Kavanaugh’s Yale classmates, who alleged that he exposed himself to her at a dormitory party when they were in college. Mayer told former New York US Attorney Preet Bharara on his podcast that she’s still getting tips and sworn statements from people with things to say about Kavanaugh’s relationships with women, and other issues.

While the official congressional investigation of Kavanaugh is likely over—the odds of him being impeached are nil—the media clearly is not done with him yet, and it isn’t clear this time around whether even a speedy, stealth swearing in will put an end to the investigations. Issues of honesty, partisanship, and of course, sexual assault are likely to hang over Kavanaugh for years to come, creating significant conflicts of interest as he tries to conduct business from the bench. In the meantime, he could start hearing cases at the Supreme Court as early as Tuesday.