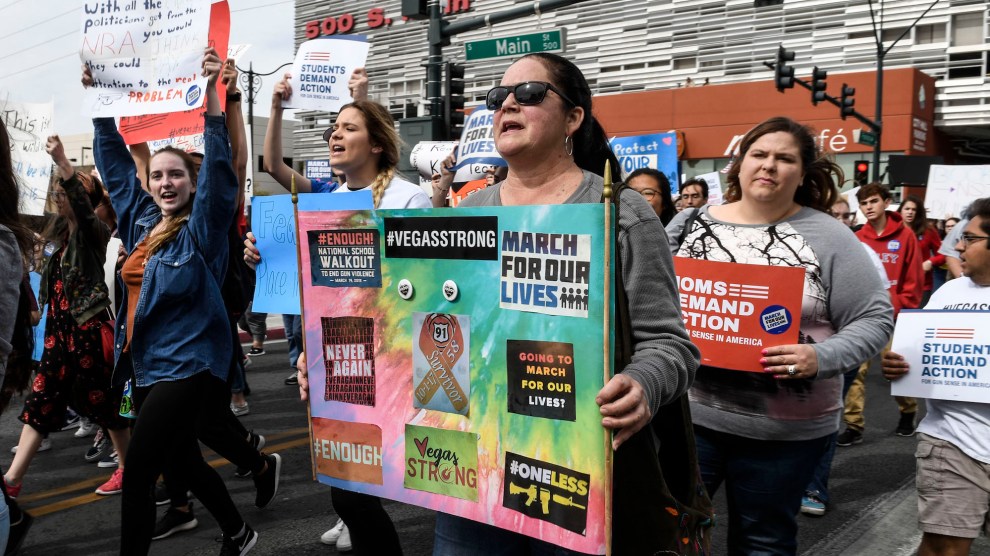 A woman carries a "Vegas Strong" poster at the March For Our Lives event in Las Vegas, Nevada, on March 24, 2018.Damairs Carter/MediaPunch/IPX

The one-year anniversary of the deadliest mass shooting in US history began with a sunrise vigil at the Las Vegas Police Department and will end with a moment of total darkness on Las Vegas’ otherwise incessantly incandescent strip. At 10:05 p.m.—the time the gunman in a suite at the Mandalay Bay hotel opened fire—the names of the 58 lives lost will be read aloud at a memorial site a few miles from the location of the tragedy.

A year before, the morning after the massacre at the Route 91 Music Festival, a member of the Democratic Congressional Campaign Committee, the national party arm charged with electing Democrats to the House, warned candidates and campaign staffs not to politicize the tragedy. The suffering of the survivors quickly fell out of view, and a conversation about stricter federal gun laws followed suit.

But the survivors of the Marjory Stoneman Douglas shooting in Parkland, Florida, did things differently. They have barely left the national spotlight since the February 14 tragedy—and the same goes for their attendant attention on voting out of office any lawmaker who stands with the National Rifle Association. And so, on this first anniversary in Las Vegas, attention is once more on those killed a year ago, but also on the state’s contested Senate seat and governor’s mansion, both of whose occupants have resisted stricter gun laws. In Nevada this year, the gun violence prevention movement will bring its midterm strategy to bear on another state too familiar with gun-inflicted tragedy.

That’s why October 2 will be a different story.

Giffords, the gun control organization founded by former congresswoman and mass shooting survivor Gabby Giffords (D-Ariz.), has partnered with the Brady Campaign to Prevent Gun Violence and local progressive group Battle Born Progress to host a roundtable with Las Vegas shooting survivors and Democratic members of Congress. According to Giffords’ press release, the groups plan to address “America’s gun violence epidemic and the importance of supporting leaders committed to fighting for a safer future.” Later that day, Giffords and her husband, Mark Kelly, will join Democratic megadonor Tom Steyer for a get-out-the-vote kickoff at the University of Nevada-Las Vegas, an event that’s part of a joint effort with Giffords, Everytown for Gun Safety, and Steyer’s youth-focused NextGen America to register 50,000 high school students for the midterm elections.

Later this week, national gun safety groups and their Democratic allies will team up for the “NR8,” an effort pinned to the Las Vegas anniversary that aims to raise $1 million for eight congressional candidates, including Rosen, who are challenging NRA-backed Republican incumbents.

Nevada has long been host to a proxy fight between gun control and gun rights groups, and battles between those competing factions have played out between the state’s legislative and executive branches.

Gun safety advocates have sought to sink Heller and Laxalt since well before the Las Vegas tragedy. In the wake of the 2012 Sandy Hook Elementary massacre that left 26 dead, Heller voted against the Manchin-Toomey measure to expand background checks. After the Las Vegas shooting, he once more voiced his opposition to such measures. As attorney general, Laxalt appeared in a 2016 NRA advertisement that asked Nevadans to oppose a ballot measure that would close the state’s background check loopholes. (The measure narrowly passed.) Heller and Laxalt have “A” and “A+” ratings from the NRA, respectively.

Nevada has long been host to a proxy fight between gun control and gun rights groups, and battles between those competing factions have played out between the state’s legislative and executive branches. In 2016, the major states groups representing each side spent a combined $22.5 million on the ballot measure Laxalt had opposed. Three years earlier, the Democrat-controlled Legislature tried to pass that measure, but Gov. Brian Sandoval (R) vetoed it. Gun laws in Nevada are generally lax—the state requires no permit for rifle, handgun, or shotgun purchases, and open carry is allowed.

This week’s campaign initiatives don’t mark the gun control groups’ first foray into Nevada’s races. Everytown has already spent $3.5 million to support Democratic gubernatorial candidate Sisolak, who had spearheaded the fundraising effort for Las Vegas victims. (The group has not yet announced its plans for key Senate races.) Giffords endorsed Rosen, who represents part of Las Vegas, and gave $5,000 to her campaign back in May. Rosen had been a vocal proponent for banning bump stocks, an appliance used in the shooting that turns firearms into semiautomatic weapons.

Gun control advocates had met news of the DCCC’s advice to candidates with outrage, and in the year since, it’s advice candidates and activists have increasingly ignored. Case in point: While Rosen only appeared at public anniversary commemorations as a Nevada congresswoman today, her campaign took advantage of the timing to point out federal lawmakers’ failures. “Despite the outpouring of activism and calls for reform, Congress still hasn’t taken meaningful action,” Rosen wrote in an email to supporters. “Thoughts and prayers are not enough—I’m committed to this issue, and I will continue working to pass commonsense gun safety laws that can help prevent tragedies like the one we went through.”