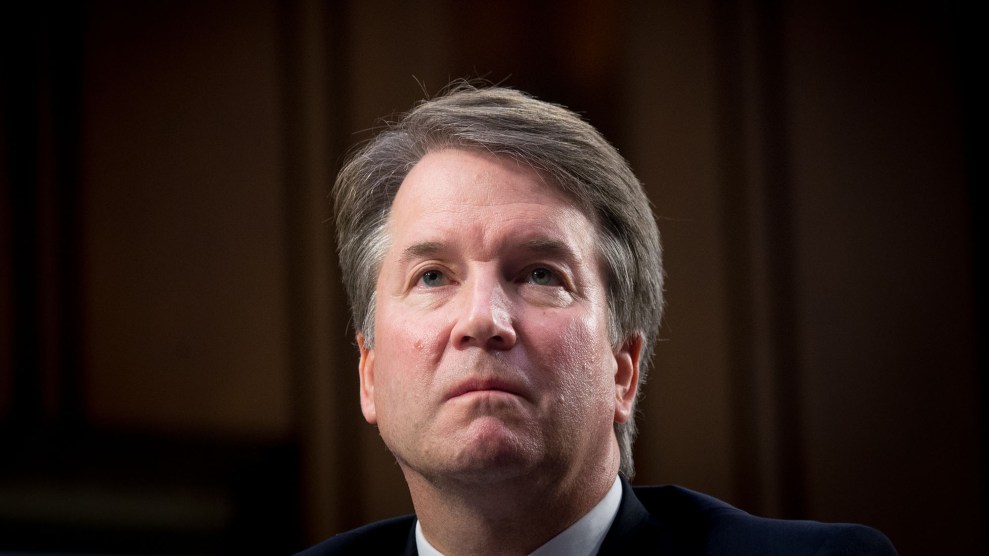 If Democrats take control of the House of Representatives in November, they may turn their newfound investigative powers on Brett Kavanaugh. “If he is on the Supreme Court, and the Senate hasn’t investigated, then the House will have to,” Rep. Jerrold Nadler (D-N.Y.), who would become chairman of the House Judiciary Committee, said last Sunday. “We would have to investigate any credible allegations of perjury and other things that haven’t been properly looked into before.”

But here’s where things could get awkward: Nadler is also a plaintiff in a high-profile case that may soon make its way to the Supreme Court. Kavanaugh, if confirmed, could be in a position to rule on a case involving someone who is in the process of investigating him.

It’s one of several cases that could pose a significant conflict of interest for a Justice Kavanaugh, particularly after he railed against Democrats in an unusually politically charged Senate hearing last week. In theory, he should recuse himself from any case involving such a conflict, but there’s no mechanism to force a recusal, and Kavanaugh’s overtly partisan statements could end up casting a cloud over many of his judgments on the bench.

Kavanaugh’s tirade against Democrats last Thursday, in which he claimed a left-wing conspiracy to block his nomination, raised serious questions about his impartiality as a judge, particularly when it comes to cases brought by or involving Democrats. “This whole two-week effort has been a calculated and orchestrated political hit, fueled with apparent pent-up anger about President Trump and the 2016 election,” Kavanaugh said in his fuming statement to the Senate Judiciary Committee. “Fear that has been unfairly stoked about my judicial record. Revenge on behalf of the Clintons. And millions of dollars in money from outside left-wing opposition groups.”

Supreme Court justices are supposed to abide by the federal recusal statute for judges. It sets a high bar for when a judge should sit out a case, but it does state that a judge or justice “shall disqualify himself in any proceeding in which his impartiality might reasonably be questioned.”

Nadler’s case could meet this criterion. He is a lead plaintiff, along with Sen. Richard Blumenthal (D-Conn.), in a case brought by 200 Democratic members of Congress challenging President Donald Trump’s business relationships with foreign governments under the Emoluments Clause of the Constitution. The case is in its early stages, but it could ultimately reach the Supreme Court—potentially several times, as various motions are appealed up to the highest court.

Blumenthal, who sits on the Senate Judiciary Committee and has opposed Kavanaugh’s confirmation, is among the senators Kavanaugh accused of a partisan hit. But Nadler’s potential role in investigating Kavanaugh would present the more glaring ethical conflict. An “objective observer could question Kavanaugh’s impartiality” in this situation, Stephen Gillers, an expert in judicial ethics at New York University School of Law, told Mother Jones in an email. “It would be hard for the public to have confidence in a Kavanaugh ruling in a case in which Nadler, Kavanaugh’s adversary in another forum (Congress), is a party.”

Gillers continued, “It is the fact that Nadler and Blumenthal are parties before the Court that provides the direct link supporting a basis to question Kavanaugh’s impartiality. The ruling directly affects them. And unlike Blumenthal who spoke and will have voted against Kavanaugh, Nadler is also setting in motion an inquiry that could harm or embarrass him publicly.”

There will be other cases where the conflict is less obvious and where Kavanaugh probably would not be legally required recuse himself. But in these cases, Kavanaugh’s partisan stance could taint the opinions of the Supreme Court with the perception of political bias.

One example is a case out of North Dakota that is currently pending before the Supreme Court. The state’s voter ID law requires voters to show an ID with proof of address. A voting rights group sued, alleging that the law was discriminatory because the vast majority of IDs for members of rural tribes use PO boxes. But the 8th Circuit Court of Appeals allowed the law to take effect last month, prompting an emergency appeal to the Supreme Court. The ability of thousands of Native Americans to cast a ballot next months could be on the line—votes that would be expected to boost incumbent Sen. Heidi Heitkamp, a Democrat in a tough reelection battle.

If Kavanaugh is confirmed on Saturday, he could help determine North Dakota tribal communities’ access to the polls, and by extension, Heitkamp’s chances of reelection. Heitkamp recently announced her opposition to Kavanaugh’s confirmation and is expected to vote against him on Saturday. Legally, the case that Kavanaugh would have to recuse himself is dubious. It “would have to say that his impartiality could reasonably be questioned because he can be inclined to vote in a way that he could believe is likely to make a Heitkamp victory harder,” Gillers wrote. “This is a difficult argument to make.”

But politically, the connection is obvious. Voter ID laws are a highly charged partisan issue. This one could easily block tribal members from casting ballots. The election could turn on a small number of votes, as it did when Heitcamp was first elected in 2012 by a margin of about 3,000 votes.

It won’t be long before Kavanaugh, if confirmed, would also rule on issues that have great consequence to Democrats and Republicans. Chief among them is gerrymandering for political gain. In North Carolina, a state that is divided fairly evenly along partisan lines, Republicans hold 10 out of 13 congressional seats due to gerrymandering. A federal district court recently found—for the second time—that the maps are unconstitutional. Kavanaugh could take part in an appeal of that ruling in his first year on the court.

Even before his charged outburst against Democrats, Kavanaugh’s record on voting issues suggested he’d be unlikely to oversee an expansion of voting rights. But the North Carolina case and others like it would raise questions about Kavanaugh’s impartiality on an issue that recently has repeatedly come down along partisan lines on the Supreme Court. Voters may wonder whether Kavanaugh holds a grudge against Democrats, making him likely to uphold a map that empowers Republicans. Even more cynically, voters may wonder whether Kavanaugh would prefer a Republican majority in Congress to insulate himself from investigation.

It may not meet the legal standard for recusal, but public trust in the Supreme Court has a different threshold.