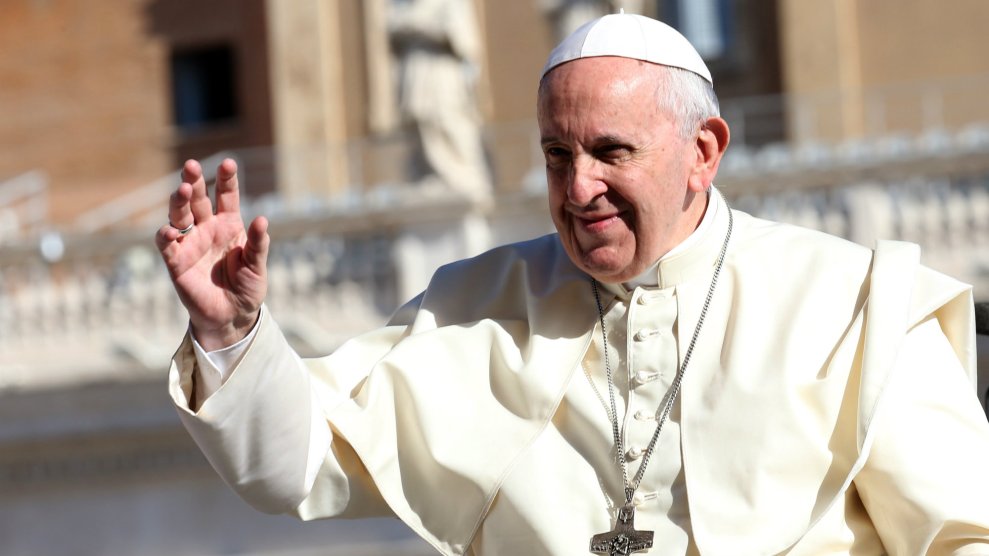 Pope Francis announced Wednesday that he would convene a global meetings of bishops next year to discuss the clergy sexual abuse crisis that has engulfed the Catholic Church and strengthened the partisan divide between bishops loyal to Francis and his conservative critics. The Vatican said the meeting would take place from February 21-24 in Rome and would include the leaders of national bishops’ conferences.

The unprecedented move is one of the strongest signs yet that the embattled 81-year-old pontiff intends to grapple seriously with the decades-long scandal that has weakened the Church’s moral authority and outraged Catholics around the world. Cardinal Daniel DiNardo, the archbishop of Galveston-Houston and the leader of the United States Conference of Catholic Bishops, is scheduled to lead a delegation to meet with Francis at the Apostolic Palace on Thursday. The pope will also speak soon with Cardinal Donald Wuerl, the archbishop of Washington, who has faced numerous calls to resign after an explosive Pennsylvania grand jury report revealed last month that Wuerl may have mishandled allegations of sex abuse by priests decades ago during his tenure as bishop of Pittsburgh.

Francis himself was accused of tacitly allowing now-disgraced Cardinal Theodore McCarrick to continue his public ministry despite warnings from Vatican officials that he had sexually abused seminarians and young priests for years. In July, McCarrick, following revelations from the New York Times and Washington Post, resigned from the College of Cardinals and was ordered to a “life of prayer and penance” pending the result of a Church trial into his conduct.

The ouster of 88-year-old McCarrick presaged a summer of hell for the Church, as the release of a grand jury report in Pennsylvania revealed how 300 “predator priests” had abused children since the 1940’s. In response to the report, Francis penned an unusual letter to the faithful condemning the cover-up of abuse and asking for forgiveness. “We showed no care for the little ones,” he wrote, “we abandoned them.”

The Church’s familiar lines of partisan division between progressives and traditionalists reasserted themselves during the pope’s visit to Ireland last month when the Vatican’s former ambassador to the United States accused him of having ignored limitations on McCarrick’s public appearances that Francis’ predecessor, Pope Benedict XVI, set in place. During the ensuing fallout, the ex-diplomat Archbishop Maria Viganò took aim at the “homosexual current” in the Church that has been “subverting Catholic doctrine.” Francis, who instructed bishops in May to reject applicants for the priesthood who might be gay, has otherwise made a number of welcoming gestures toward LGBT Catholics that have infuriated his conservative enemies. He previously said, “Who am I to judge?” on the subject of gay priests, and this past year let the term “LGBT” be used for the first time ever in an official Vatican document.

Though Francis has hinted that he will formally respond to Viganò’s claims in the near future, he has so far remained quiet when asked about it, instead suggesting journalists reflect on the claims made in the archbishop’s explosive letter. “Read the statement carefully and make your own judgment,” he said on a plane back from Ireland. “I will not say a single word on this.”

Among the top Church officials who have pressed Francis to directly confront the clergy sex abuse scandal is Cardinal Seán P. O’Malley of Boston, a member of the nine-person Council of Cardinals who urged the pontiff to call the global meeting. (The sexual abuse crisis in the American Church began in earnest under O’Malley’s predecessor in Boston, Cardinal Bernard Law.) O’Malley now heads the Pontifical Commission for the Protection of Minors, which met in Rome from September 7-9. Francis established the group in 2014 to “advise him on actions to be taken to combat the abuse of minors in the church,” according to the Jesuit magazine America.

“It is crucial to bring the voice of the victims to the leaders of the church to make everyone understand how important it is for the church to give responses in a rapid and correct manner to every situation of abuse in whatever way it is manifested,” O’Malley said at the conclusion of the commission’s meeting.

A pope has only summoned top bishops for a special conference of this kind three times since 1965, according to longtime Vatican observer Rocco Palmo, who runs the “Whispers in the Loggia” news site. “Today’s announcement signals a papal vote of confidence in O’Malley’s efforts,” Palmo reported.