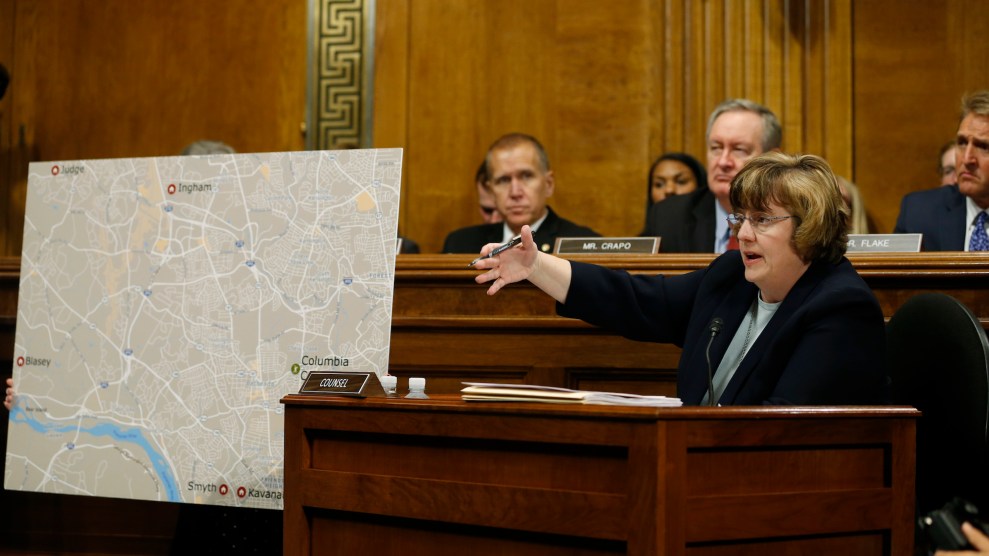 When it became clear Dr. Christine Blasey Ford was going to testify before the Senate Judiciary Committee about her allegations of sexual assault by Supreme Court nominee Brett Kavanaugh, Republican members of the committee made a critical decision. Fearing a repeat of the 1991 Anita Hill debacle—once again, the Republicans on the committee are all men, and they didn’t want to be perceived as badgering a victim of assault—they hired what Senate Majority Leader Mitch McConnell called a “female assistant” to do the questioning for them. That strategy seems to be working, in the sense that Arizona sex crimes prosecutor Rachel Mitchell has treated Ford with respect during her questioning.

But Mitchell’s approach to questioning may not be exactly what the GOP senators were hoping for. She has been methodical, almost plodding, in going over the minutiae of Ford’s statement and pressing her again on her memory of the alleged events. It’s tedious and not especially enlightening. The approach will be familiar to any lawyer who has ever conducted a deposition. At one point, when Ford simply said, “Uh huh,” and nodded her head in response to a question, Mitchell asked, “Is that a yes?” as if she were making sure the response was captured by the court reporter.

But while depositions can go on for hours—and may be followed by trial testimony that can last a few more days—Mitchell only has about an hour to extract information from Ford and possibly impeach her testimony. Even worse for the GOP, Mitchell’s questioning is coming only in five-minute intervals, a format insisted upon by committee chairman Chuck Grassley (R-Iowa). That format is clearly hurting Mitchell’s flow, as she has to stop her inquisition to allow Democratic senators to ask questions and make speeches. The Democrats are using that time well, while Mitchell’s questions seem only to be helping Ford, who has answered them all carefully and precisely, making small corrections to mistakes she thinks she might have inadvertently made.

Depositions are always tedious, but they serve a purpose in laying traps for a witness and creating a record that will help a lawyer undermine the witness at a later date on the stand during a trial. Mitchell isn’t going to get a trial, or even a closing statement—the time when a skilled trial lawyer, someone like, say, Sen. Lindsey Graham (R-S.C.), would bring all the facts together in a compelling narrative. Mitchell has no story to tell, and Republican senators waived their ability to tell one, too.

Partisans on the Republican side are not happy about any of this, particularly the format Grassley imposed. Rich Lowry, editor of the conservative National Review, tweeted:

at the very least, grassley should have set aside 15-mins for prosecutor, then let three democrats question, and so on

Almost every person close to Trump who had told me having a sex crimes prosecutor question Ford was good strategy is saying they think it was a mistake after the first portion of the hearing.

Even hardened conservative Fox News commentators are freaking out about the process:

Fox commentators are fuming on air over how the Senate GOP is handling the Kavanaugh format. All but saying Grassley is blowing it.

Chris Wallace anchoring Fox News' coverage: Says anybody's heart would go out to Blasey Ford. Adds, "This is a disaster for the Republicans."

Andrew Napolitano: Christine Blasey Ford came across "with great credibility, with serious intellect, and with appropriate emotion. At this point she is one 100%. No one has laid a glove on her and she's absolutely believable in my opinion."