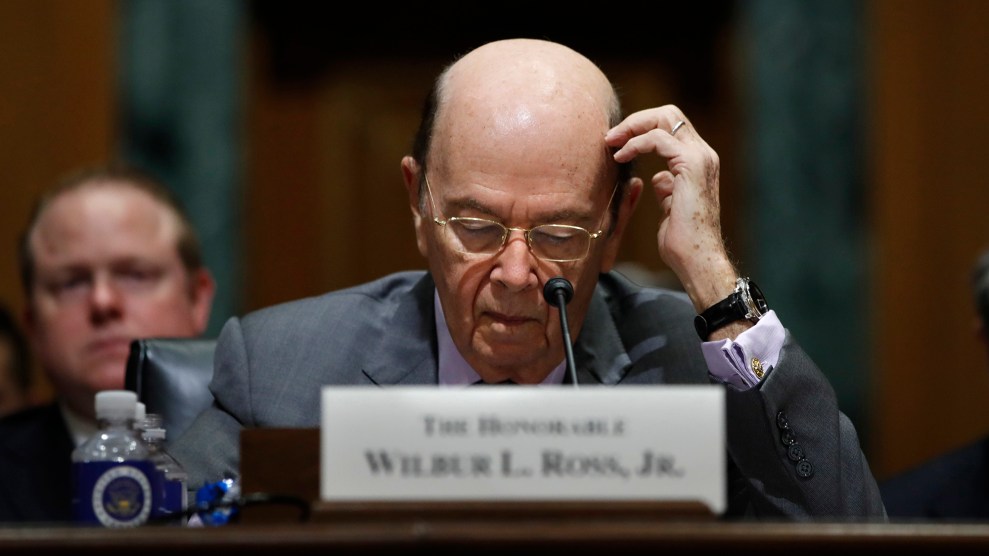 In March, Commerce Secretary Wilbur Ross, who oversees the Census Bureau, approved a controversial question about US citizenship on the 2020 census, claiming that the Justice Department needed it for “more effective enforcement” of the Voting Rights Act. Ross said at the time and in subsequent testimony before Congress that he approved the question after the Justice Department requested in December 2017 that it be added.

However, new documents released as part of a lawsuit by New York state against the Trump administration directly contradict Ross’s public comments, showing that the commerce secretary repeatedly lobbied the Justice Department to add the citizenship question after consulting with anti-immigration hardliners. On September 8, 2017, Earl Comstock, a top official in the Commerce Department, wrote to Ross, “Justice staff did not want to raise the [citizenship] question given the difficulties Justice was encountering in the press at the time (the whole Comey matter).”

1/ In our Census case, we just got this email to Wilbur Ross that the court ordered the Govt to unredact. It shows that when Commerce first asked DOJ to come up w/a pretext for adding the citizenship q, DOJ balked b/c it was already getting bad press with "the whole Comey matter" pic.twitter.com/KgqdJJ0hRp

One of the senior administration officials who lobbied Ross to add the question was former White House chief strategist Steve Bannon. In July 2017, Kansas Secretary of State Kris Kobach—at the time the vice chair of President Donald Trump’s now-defunct Election Integrity Commission—wrote to Ross “at the direction of Steve Bannon” and said it was “essential” that the citizenship question be added to the census. Kobach wrote that the absence of a citizenship question “leads to the problem that aliens who do not actually ‘reside’ in the United States are still counted for congressional apportionment purposes.”

Kobach’s correspondence with Ross contradicted the Trump administration’s stated rationale for the question—Kobach never mentioned the Voting Rights Act in his letter—and suggested the question was added to reduce the political clout of areas with many immigrants and boost Republicans. The Justice Department said in court that Kobach, Bannon, and Attorney General Jeff Sessions, who have all advocated aggressive crackdowns on immigration, were among those involved in pushing for the citizenship question.

In July, Judge Jesse Furman of the Southern District of New York ruled that a lawsuit against the Trump administration filed by New York and 16 other states challenging the citizenship question should go to a full trial. While noting that Ross had “broad authority over the census,” Furman said his decision to add the citizenship question may have been “motivated at least in part by discriminatory animus and will result in a discriminatory effect.”

Furman questioned Ross’s truthfulness and the administration’s motives in adding the question. “Secretary Ross’s sole proffered rationale for the decision, that the citizenship question is necessary for litigation of Voting Rights Act claims, may have been pretextual,” he wrote. “For one thing, there is no indication in the record that the Department of Justice and civil rights groups have ever, in the fifty-three years since the Voting Rights Act was enacted, suggested that citizenship data collected as part of the decennial census would be helpful, let alone necessary, to litigate such claims. For another, while Secretary Ross initially (and repeatedly) suggested that the Department of Justice’s request triggered his consideration of the issue, it now appears that the sequence of events was exactly opposite.”

Indeed, in a May 2017 email to Ross, Comstock wrote, “We need to work with Justice to get them to request that citizenship be added back as a census question.” Ross responded to Comstock in August 2017, “Where is the DoJ in their analysis? If they still have not come to a conclusion please let me know your contact person and I will call the AG.” (These emails were first reported by Hansi Lo Wang of NPR.)

Plaintiffs in the New York lawsuit, which include the New York attorney general’s office and the ACLU, have filed a motion to depose Ross, claiming he repeatedly misled the public about the origins of citizenship question and why it was needed, including under oath during testimony to Congress in March 2018 when he claimed that the Department of Justice had “initiated” the request. “This is astonishing, unprecedented conduct from a Cabinet member,” they wrote in a filing on Monday night. “It has consequences not for some minor or ministerial matter, but for the accuracy of the decennial census—which the Secretary agrees will affect ‘foundational elements of our democracy.'”

Six major lawsuits, including the one from New York and 16 other states, are currently challenging the citizenship question. The first trial begins in New York City on November 5, one day before the midterms.