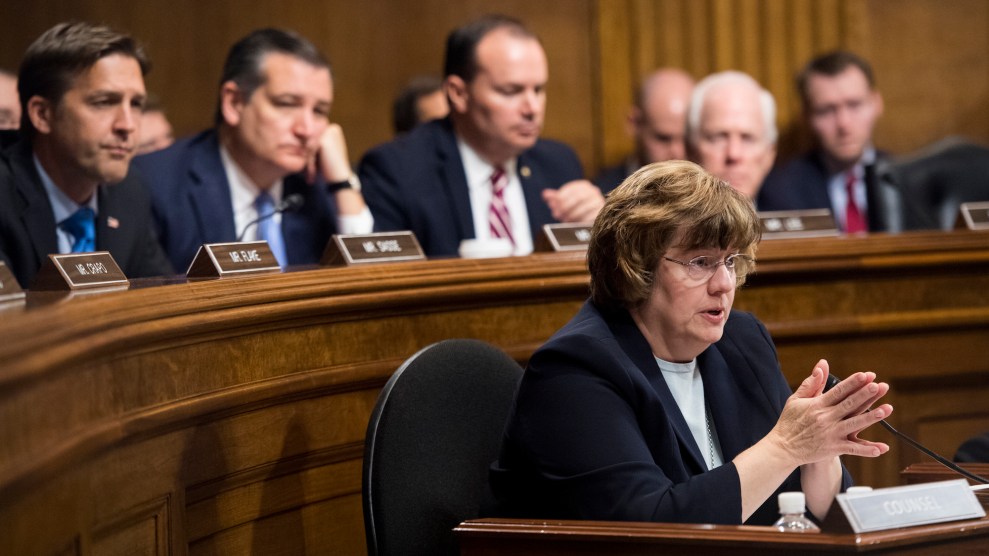 “I’ve been really impressed today, because you’ve talked about norepinephrine and cortisol and what we call in the profession, basically, the neurobiological effects of trauma,” Mitchell told Ford, a psychology professor at Palo Alto University and research psychologist at Stanford Medical School. “Have you also educated yourself on the best way to get to memory and truth in terms of interviewing victims of trauma?”

“Would you believe me if I told you that there’s no study that says that this setting…is the best way to do that?”

The knowing question elicited a rare moment of laughter in the emotionally charged hearing room, where Mitchell had attempted to interview Ford in five-minute increments while continually ceding the floor to Democratic senators for questioning. “We could stipulate that,” Debra Katz, one of Ford’s lawyers, replied.

There is a better way to question survivors of trauma about their experiences—one that Mitchell knows very well, according to Tasha Menaker, chief strategy officer for the Arizona Coalition to End Sexual and Domestic Violence.

Law enforcement officials—including prosecutors—have a well-earned reputation for treating victims of sexual assault not as victims, but suspects who may be interrogated and sometimes even charged (one of the many reasons most victims never report their experiences to police). Yet they’ve long had access to more effective tools for eliciting stories from survivors. Menaker, who has worked with Mitchell over the past three years to develop Maricopa County’s sexual assault protocol, says that as head of the sex crimes division of the county attorney’s office, Mitchell has received training on strategies to interview victims of trauma, and her office has helped coordinate trainings on the topic for local law enforcement.

Those trainings aren’t uncommon for special victims investigators, prosecutors, and social workers, who routinely employ forensic interviewing strategies to get information from trauma victims without re-trauamatizing them or causing them to stop cooperating. Those strategies, known as “trauma-informed” interviews, have been developed and refined over the last three decades, stemming in part from the child sex abuse panic of the 1980s, when kids suspected of being victims were subjected to repeated interrogations that often involved leading questions. Around the same time it became clear those interviews had produced false testimony and, in some cases, wrongful convictions, psychologists and law enforcement officers were working to develop new interviewing strategies for both children and adults, informed by an evolving scientific understanding of how traumatic events affect the brain and the way memories are encoded.

In general, trauma-informed interviews are designed to make victims feel comfortable and in control while producing more details for detectives to investigate further. In Maricopa County, Menaker says, those interviews typically involve talking to victims in special rooms designed to feel intimate and calming. Trained interviewers ask open-ended questions, allowing victims to take their time telling their stories. Victims are asked about what they heard or felt rather than grilled on a specific timeline. “It creates a space that whoever’s doing an interview can convey compassion,” Menaker explains.

Earlier this year, Judie Trimboli, senior investigator with the New York State Police’s Campus Sexual Assault Victims Unit—a specially trained unit responding to sexual violence on campuses—told me how a trauma-informed interview can change the course of an investigation:

Trimboli frequently advises cops who want to do the right thing but don’t know where to begin. She recalls a recent incident when a female trooper called her for help with a possible domestic violence case. A young woman sitting in the trooper’s interview room was struggling to coherently describe some sort of frightening relationship, but the frustrated trooper couldn’t understand what had happened. A few days later, Trimboli interviewed the young woman using a recently developed technique known as the Forensic Experiential Trauma Interview. FETI, as it’s called, relies on open-ended, empathetic questioning. Instead of prodding a victim, “Why did you wait until today to report?” an officer may say, “Help me understand what brought you here today.” If a victim responds with an inconsistent, imprecise, or fragmented story, as many do, interviewers are trained to see it as a consequence of the brain’s defensive reaction to trauma, rather than a signal that she’s lying.

The technique not only increases the likelihood that a survivor will cooperate, but also uncovers more leads for investigators to follow, according to the victims unit. Trimboli’s FETI interview produced a clearer picture of what had happened. Trimboli says the young woman shared that their conversation helped her sleep through the night. And the trooper later told her, “If I knew how to do what you just did, I wouldn’t have had to go home and drink a whole bottle of wine.”

Menaker says Mitchell’s questioning of Ford bore some of the hallmarks of a trauma-informed interview—including her attempts to express empathy for Ford and the way she began by admitting how wrong it was that Ford should be terrified. But ultimately the Senate hearing became a cross-examination, she says, not just because of its format, but because of the types of questions Mitchell chose to ask, such as those about who paid for Ford’s polygraph test or whether she is truly afraid of airplanes. “[Mitchell was] jumping around from topic to topic, jumping around in time. One of the questions that was noteworthy to me was when she asked if there were other things that contributed to her feeling of PTSD and anxiety—as if sexual assault weren’t reason enough.”

Of course, it didn’t help that the Republican senators who hired Mitchell and orchestrated Ford’s hearing concluded the day by loudly defending Kavanaugh and apologizing to him for the multiple allegations he faces. (Meanwhile, Mitchell’s boss, Maricopa County Attorney Bill Montgomery tweeted that Democrats on the Senate Judiciary Committee were “a pack of hyenas.”) Menaker says she’s now worried that victims in Maricopa County will be deterred from reporting sexual assaults to police after seeing their deputy county attorney ally herself with Senate Republicans. “No matter how good of a job Rachel did, at the end of the day, whatever prosecutor chose to go into that role is going to be seen as partisan.”

This story was supported by DisHonorRoll, which is made possible through a grant from the Media Consortium.