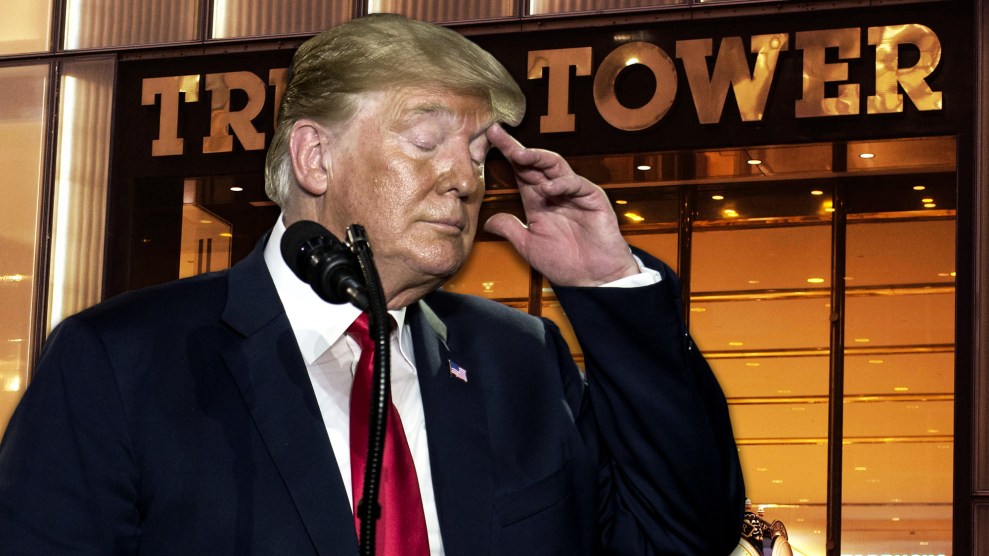 President Donald Trump admitted Sunday morning that the June 2016 Trump Tower meeting between his son, Donald, and Russian lawyer Natalia Veselnitskaya was designed to get damaging information about Hillary Clinton—contradicting the president’s original claims made last summer that the meeting was mostly about adoptions of Russian children.

“This was a meeting to get information on an opponent, totally legal and done all the time in politics,” Trump wrote on Twitter.

Fake News reporting, a complete fabrication, that I am concerned about the meeting my wonderful son, Donald, had in Trump Tower. This was a meeting to get information on an opponent, totally legal and done all the time in politics – and it went nowhere. I did not know about it!

Trump appears to be referencing the Washington Post, which reported on Saturday that Trump is particularly concerned about whether special counsel Robert Mueller’s Russia investigation will ensnare his son:

Trump has confided to friends and advisers that he is worried the Mueller probe could destroy the lives of what he calls “innocent and decent people” — namely Trump Jr., who is under scrutiny by Mueller for his role organizing a June 2016 meeting at Trump Tower with Russians promising dirt on Hillary Clinton. As one adviser described the president’s thinking, he does not believe his son purposefully broke the law, but is fearful nonetheless that Trump Jr. inadvertently may have wandered into legal ­jeopardy.

Conceding that the meeting was about getting dirt on Clinton follows claims Trump and Rudy Giuliani, a member of his legal team, made earlier this week. Giuliani told CNN on Monday that colluding with Russia may not be a crime, ushering in a new line of defense against the special counsel investigation. Trump embraced that defense in a Tuesday morning tweet:

Collusion is not a crime, but that doesn’t matter because there was No Collusion (except by Crooked Hillary and the Democrats)!

The new approach follows reports that Michael Cohen is willing to tell special counsel Robert Mueller that Trump knew about the Trump Tower meeting in advance and was aware that Russians were expected to offer damaging information about Clinton. Cohen says that he was present when Trump learned about the meeting and that Trump approved it, according to sources interviewed by CNN.

The New York Times first reported the Trump Tower meeting between Donald Trump, Jr. and Veselnitskaya last July. Trump’s son-in-law Jared Kushner, and then-campaign chairman Paul Manafort were also at the meeting. Trump Jr. told the Times in a statement that, “We primarily discussed a program about the adoption of Russian children that was active and popular with American families years ago and was since ended by the Russian government.”

Three days later, the Times reported that the president signed off on his son’s statement. Jay Sekulow, a member of Trump’s legal team, responded by saying that, “I wasn’t involved in the statement drafting at all, nor was the president.”

But later in July, the Washington Post reported that Trump personally dictated the adoption statement. White House press secretary Sarah Huckabee Sanders said the president had only “weighed in, as any father would” on the statement. “He certainly didn’t dictate,” she said.

In January, Sekulow and fellow attorney John Dowd admitted in a letter to Mueller that “the President dictated a short but accurate response to the New York Times article on behalf of his son, Donald Trump, Jr.”

“I had bad information at the time,” is how Sekulow explained that contradiction to ABC’s George Stephanopoulos on Sunday morning:

Pres. Trump's attorney Jay Sekulow on previously denying that the president was involved in putting out a statement on the Trump Tower meeting: "I had bad information at that time and made a mistake in my statement … over time facts develop" https://t.co/9MwzDoAwHB #ThisWeek pic.twitter.com/OBuu7rFmda