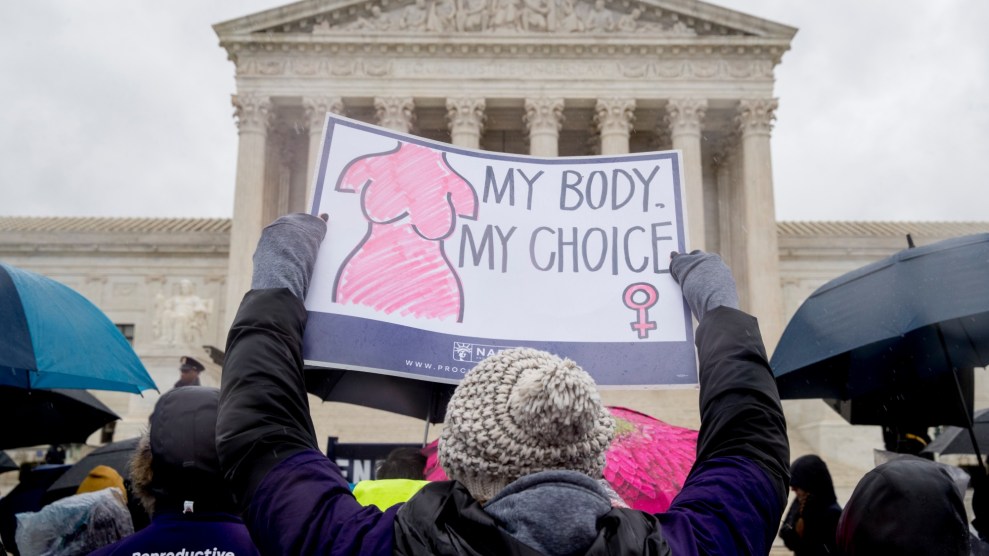 A pro-abortion rights supporter holds up a sign during a rally outside the Supreme Court in Washington, DC, on March 20, 2018.Andrew Harnik/AP Photo

Today, Roe v. Wade is practically synonymous with abortion. The 1973 Supreme Court decision that legalized the procedure nationwide is a cause célèbre for activists on both sides of the abortion debate. But it’s much more complicated than that. The landmark ruling also changed the way the courts consider privacy—at the center of the winning argument was the idea that abortion is a personal choice that the government shouldn’t interfere with, at least until fetal viability. “We acknowledge our awareness of the sensitive and emotional nature of the abortion controversy,” Justice Harry Blackmun wrote in the majority opinion for the court. “The right of privacy…is broad enough to encompass a woman’s decision whether or not to terminate her pregnancy.”

As law professor Mary Ziegler argues in her recent book, Beyond Abortion: Roe v. Wade and the Battle for Privacy, since 1973 the privacy precedent set by Roe has been invoked in a host of important cases unrelated to abortion, from In re Quinlan, a 1976 right-to-die case that authorized the father of a woman in a vegetative state to refuse medical treatment on her behalf, to Lawrence v. Texas, a 2003 Supreme Court case that struck down a Texas anti-sodomy law. Following the nomination of staunch conservative Brett Kavanaugh to the Supreme Court, the death of Roe appears to be imminent, and with it a woman’s right to end her own pregnancy. But the end of Roe could upend the way the courts think about privacy, too.

Ziegler talked with Mother Jones about how Roe has impacted the courts over the years, and what overturning it would mean for privacy, contraception, and more.

Mother Jones: Let’s start with some background. When most people think of Roe, they think of abortion, but it’s also about privacy—that a right to privacy from the government extends to a woman’s decision to have an abortion. Can you explain what this means?

Mary Ziegler: Starting in the 1920s, the Supreme Court began holding that the due process clause recognizes rights involved or related to family. [There were] first two decisions called Meyer v. Nebraska and Pierce v. Society of Sisters, and those both enveloped parents’ rights to direct the upbringing of their children. Over the decades, especially once you got into the ’60s and early ’70s, the court held that the right to privacy also encompassed things like the decision to marry; the decision to use contraception, either for married couples or single people; and other decisions involving parenting. So by the time you got to Roe, the court was thinking of the abortion decision as part of a network of decisions touching on family reproduction and marriage.

MJ: Over the years, how have both sides of the abortion debate employed this privacy doctrine to advance their causes? And why does no one associate Roe with privacy anymore?

MZ: Immediately after Roe, and in the 1970s in particular, both conservative and progressive groups used Roe to define a more expansive privacy agenda, and it was often one that had nothing to do, or at least nothing explicitly to do, with abortion. So, activists who were interested in rights for gays and lesbians and other kinds of folks whose sexual habits or lives didn’t match up with criminal laws at the time used Roe to say that the Constitution either does or should protect the right to sexual intimacy. There were people who were fighting for rights for mental health patients to have more autonomy over their treatment. People who wanted more control over their personal data at a time when computers were just coming into vogue. People who wanted access to developing treatments at a time when cancer was even more fatal than it is now. People interested in the right to die.

For a while, you saw social movements using Roe in contexts that were beyond abortion. In the ’70s, it was possible to have anti-abortion Democrats and pro-choice Republicans. But by the time 1980 rolls around, that would’ve been kind of politically bizarre, right? If you were a conservative, to invoke Roe at all would have come across as strange.

The other thing that changed was that anti-abortion folks worked actively to make Roe synonymous with abortion. That became something that was argued in the public square rather than just in academia or in the ivory tower. [It became] more of a liability it seemed for anyone to put Roe front and center.

MJ: What are some cases in which Roe’s ruling regarding the constitutional right to privacy has been invoked?

MZ: Roe was cited in a case called In re Quinlan, which was one of the foundational right-to-die cases. Roe was also cited in a New Jersey case called State v. Saunders that struck down that state’s law on fornication, or sex out of wedlock. So Roe was influential in big precedents, but it’s also interesting to know that the ways it didn’t work were important, too. For example, in the ’70s, you saw people being really anxious about the way their personal data was being used in a way that would feel really timely today. There was an effort in 1974 to pass this overarching privacy legislation, but there were lots of exemptions scattered throughout the act. There was a conversation at the time about what data privacy means and what the Constitution actually has to say about it, and Roe was definitely invoked by both liberals and conservatives in that conversation.

After [that legislation] passed in ’74, there were bipartisan bills proposed that would expand privacy for patients, and the connections with Roe were obviously that Roe protected patient autonomy. But none of those bills ever actually went anywhere until [the Health Insurance and Portability and Accountability Act passed in 1996]. The reasons often that those fights didn’t progress any further were not because of Roe; it was just because there were other constraints. Everybody, in theory, agreed that patient privacy mattered, but then they disagreed about when there should be exemptions and how broad the exemptions should be. Conservatives were more worried about crime and about too much of an administrative burden on businesses. Liberals were more worried about things like data being used to facilitate race discrimination or discrimination against the poor. All of that kind of stalled and eventually ended the push.

“You could try to make it just about Roe and abortion alone, but it will be harder than many people think to isolate abortion and not touch other precedents.”

MJ: Justice Kennedy’s retirement and Kavanaugh’s nomination will very likely mean that Roe is overturned. Do you think these conversations sparked by Roe about what constitutes a right to privacy will be a part of efforts to overturn it?

MZ: I do, in part. What I was alluding to before, in the ’70s, you had people along the political spectrum who were using Roe to rethink what privacy could mean. By the ’80s and ’90s, you instead had a conversation where the fact that Roe had touched on the right to privacy was seen as politically stigmatized. From the very beginning, law professors had been critical of the reasoning of Roe. The Roe court relied on a lot of nonlegal reasoning and sources—there’s a lot in Roe about medical opinion about abortion. In the ’80s when pro-lifers and Republicans were trying to expand their offensive against Roe, they tried to popularize this idea that Roe was an unprincipled and illogical decision: The idea that if you’re not relying primarily on the text or history of the Constitution, you’re just imposing your value preferences on everybody else. A lot of these groups began taking those arguments to the media, to the public square, to Congress. Those arguments have been floating around ever since.

It’s made more complicated now by the fact that we’re not really talking anymore just about Roe as precedent. We’re talking about the subsequent decisions that have interpreted Roe like Planned Parenthood v. Casey, which made it very hard to regulate abortion in the first trimester. When we’re talking about the court overruling Roe now, we’re really talking about the court overruling Roe and Casey and everything that’s come afterward. It would probably be more apt to say overturn what’s left of Roe, not Roe, because Roe as it originally was handed down no longer exists.

MJ: Do you think anti-abortion activists are thinking about how to challenge some of these other cases, like Casey, that deal with abortion and not just challenging Roe?

MZ: Absolutely. One of the things I think that’s really interesting to think about is why we talk so exclusively about Roe when Roe has been modified in other decisions that have come more recently. What you’re really talking about when overturning Roe is overturning this whole ecosystem of decisions that have come from Roe and after Roe. Roe isn’t really the only issue or even the main issue, but it seems to have this hold on our imaginations in a way that maybe no other Supreme Court decisions do.

MJ: What about some of the cases you cited that aren’t explicitly tied to abortion but invoke the right to privacy that was put forth by Roe? Do you think the overturning of Roe might open up some of those other cases?

MJ: If Roe is overturned, do you think it will affect privacy rights? If so, how?

MZ: It depends. The court could gut Roe without overturning it, and the court could overturn Roe without saying much about the privacy precedent specifically. But I think it’s harder to thread that needle than some people suggest. Roe had a particular vision of what privacy meant—it’s not privacy in the sense of being left alone, not privacy purely in the sense of government non-interference, but an idea of autonomy and self-definition. That idea runs through the precedents of things like same-sex marriage. You could try to make it just about Roe and Roe alone and abortion and abortion alone, but it will be harder than many people think to isolate abortion and not touch other precedents.