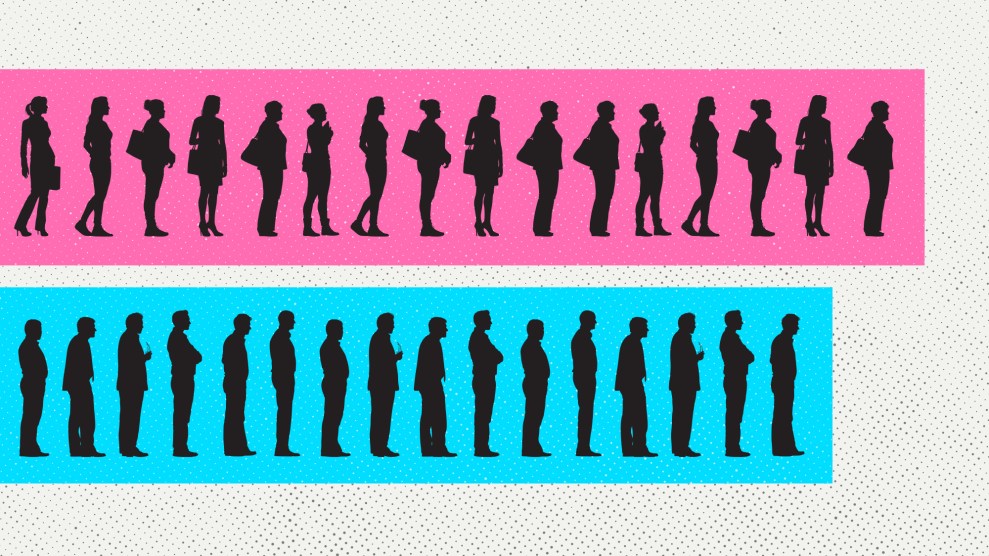 Julie Pazina was glued to the TV screen the night of the 2016 presidential election. As the results started to roll in and the possibility of a Donald Trump presidency became a reality, Pazina was devastated, and by the next morning, she knew she had to do something. The election was a “turning point.”

“It was when I decided I needed to be the change I wanted to see,” Pazina told Mother Jones. “I think a lot of people had that moment of thinking, ‘Where’s my voice? I can’t say I want these people to be my voice anymore.'”

That day, Pazina, 41 years old and a political newcomer, began considering a run for office. And this November, voters in District 20 in Nevada, where Pazina has worked for 12 years in sales for a utility contractor, will decide whether to elect her as their next state senator. Pazina was not alone in her decision to go out on a limb. An unprecedented number of women, many of them new to politics, are running for office at all levels of government—from school board member to US senator—this election cycle.

Nowhere is this trend more evident than in Nevada, which is poised to make history in November and become the first female-majority legislature in the nation. Nevada currently ranks third in the nation when it comes to gender parity in its legislature. With a breakdown of 38.1 percent female and 61.9 percent male lawmakers, the state is surpassed only by Arizona and Vermont, according to the Center for American Women and Politics at Rutgers University. (The worst states? Wyoming and Oklahoma, which have only 11.1 percent and 13.4 percent women lawmakers, respectively.) If all goes well at the polls in November, women may soon outnumber men in Carson City—there are 16 women running for reelection in November and 11 others running against incumbent men. Pazina could help make the shift: The Democrat is running against a male Republican incumbent for a state Senate seat in the ultra-competitive 20th District.

But women candidates in the Silver State face an uphill battle. According to an analysis by the Reno Gazette-Journal, women are shoo-ins for 27 seats in the Assembly and Senate going into the general election (there are 42 seats in the Nevada Assembly and 21 in its Senate). Meanwhile, six women are running in highly competitive races—one Senate and five Assembly seats—and five of them will need to win in order to secure a 32-seat female majority. Of these close races, only one woman has the benefit of being an incumbent—Lesley Cohen won against Republican incumbent Stephen Silberkraus in 2016 by less than 1 percent, and the two are battling for the third time in 2018.

Pazina’s race is a case in point: Her district has only 401 more registered Democrats than Republicans, according to an analysis by the Nevada Independent, and the seat has been held by a Republican since 2010. Her opponent, Keith Pickard, is a popular Republican assemblyman and National Rifle Association member whose campaign priorities are school choice and lowering taxes. Pazina, who works for a company that provides utility services for trade shows, is running on a platform to double down on clean energy and boost the state’s tourism industry. And she’s betting that, in a state where more than 1 in 4 employees work in hospitality, she’ll appeal to the working class more than her competition. She has a long string of progressive endorsements, among them the state AFL-CIO, Planned Parenthood, and the Human Rights Campaign.

Also on Pazina’s side are the other Democratic women running for office in the state. Pazina sometimes canvasses with a handful of candidates for statewide office, and they post their support of one another’s campaigns on social media. The women candidates I spoke to for this story cited Democrat Barbara Buckley, the first woman in Nevada to serve as Speaker of the Assembly, as inspiration for their campaigns. “You look at some of these women [in the legislature], and they’re just so impressive,” Pazina said. “We see strong female leadership and think, ‘We can do this.'”

And the state’s recent wave of progressive organizing can’t hurt. Last year, Nevada became the 36th state to ratify the Equal Rights Amendment, the proposal to enshrine gender equality in the Constitution.  It also came close to becoming the first state to implement Medicaid for all. (The bill was vetoed by the Republican governor at the last second.) And the state has voted blue in the past three presidential election cycles, something it hadn’t done since the 1940s. Emerge Nevada, a candidate training organization, told the Gazette-Journal it has trained twice as many female candidates ahead of the midterms than it had in the past 12 years.

If the legislature does flip, the so-called “blue wave” that has swelled in the wake of Trump’s election won’t be entirely to credit. The women running for office in Nevada this November aren’t politically homogenous: Of the 45 total women running, 31 are Democrats and 14 are Republicans. In the six competitive races, two candidates are newcomer Democrats looking to unseat male Republican incumbents, while another is a newcomer Republican running against a male Democrat incumbent in a slightly left-leaning district. Yet another Republican woman is looking to win back a seat she lost to a male Democrat in 2016.

Cohen, the incumbent, told Mother Jones that beyond political affiliation, she thinks voters are interested in seeing themselves represented in the capital. “When it comes down to it, the constituents are interested in what the candidate has to offer, but they do know women that bring a different sensibility [to the job],” she said. “[A female majority] would be groundbreaking.”