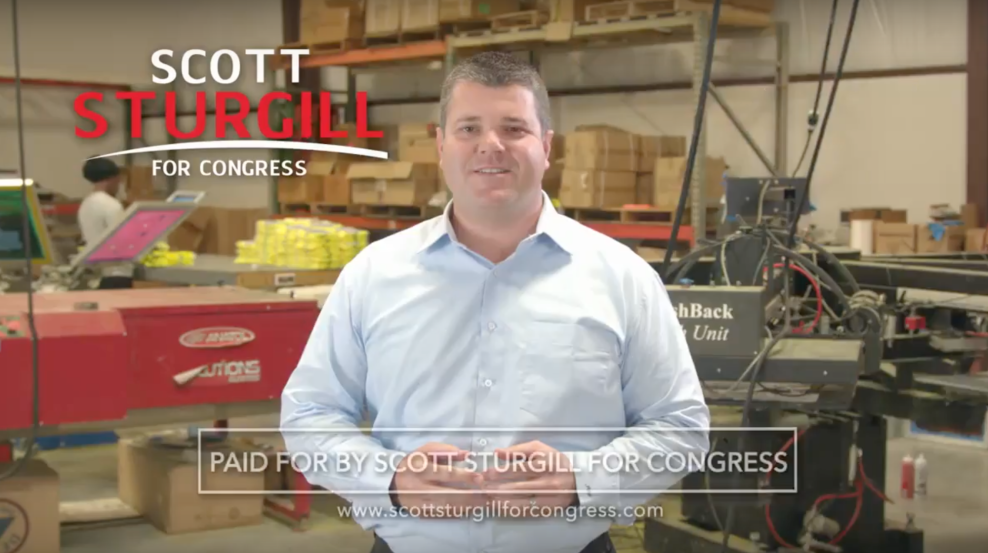 A screen grab from one of GOP congressional candidate Scott Sturgill's campaign advertisements.Scott Sturgill for Congress

Two Republican congressional candidates from Florida have paid thousands of dollars to companies affiliated with a contributor to Infowars—the far-right media empire run by Alex Jones that is best known for promoting outlandish conspiracy theories. In the past, Jones has used the platform to suggest that the US government helped carry out the 9/11 terrorist attacks and that the 2012 school shooting in Newtown, Connecticut, was a “giant hoax.” In fact, Infowars is so extreme that some of its content was recently banned by Facebook, Apple, YouTube, and Spotify; Jones himself was recently suspended from Twitter.

According to Federal Election Commission records, the two Republican candidates—Scott Sturgill and Brad Sostack—made payments to companies associated with Jacob Engels, who identifies himself as an Infowars contributor and has made multiple appearances on Infowars broadcasts. Engels also has ties to the Proud Boys, a far-right men’s fraternal group that describes itself as a “Western chauvinist” organization. The Southern Poverty Law Center has deemed the Proud Boys a “hate group,” a label the Proud Boys reject.

Sturgill, who is running for the GOP nod to take on Rep. Stephanie Murphy (D-Fla.) in the Orlando-based 7th Congressional District, is backed by the National Republican Congressional Committee, the DC-based organization tasked with helping elect Republicans to Congress. Sostack is hoping to unseat Rep. Charlie Crist (D-Fla.), the state’s former governor, who now represents the 13th District, which includes Clearwater and St. Petersburg.

It’s unclear what, specifically, the companies were paid to produce. Engels, as well as the Sturgill and Sostack campaigns, did not return requests for comment.

Engels’ Twitter profile states he is the publisher of the Central Florida Post, which, according to its website, publishes stories that “mainstream media sources are too afraid to tackle.” Engels writes many of the site’s pieces himself, and his biography on the site says he is a journalist who “focuses on stories that other news outlets neglect or willingly hide to curry favor among the political and business special interests in the state of Florida.”

The Central Florida Post‘s content includes conspiratorial statements aligned with the politics of the far right. A July 28 piece by Engels, for example, states that Obama-era CIA Director John Brennan converted to “Radical Islam” while he was stationed in Saudi Arabia, a claim that others on the right have also made and that has recently been promoted by Infowars. Another recent post by Engels refers to billionaire liberal donor George Soros as a “Nazi collaborator,” a version of a long-running conservative smear that has been propagated by Jones, Donald Trump Jr., and others.

Engels and the Central Florida Post have also given favorable coverage to Sturgill. Recent stories, for example, have repeatedly slammed Mike Miller, the Republican state lawmaker running against Sturgill in the GOP primary, for voting to fund Planned Parenthood in Florida. One of Engels’ pieces also draws attention to Sturgill’s “brutal ad” highlighting this vote.

In June, the Central Florida Post published a story highlighting a Sturgill advertisement alleging that Murphy, the Democratic incumbent, abandoned her constituents during Hurricane Irma and instead chose to host a “ritzy” fundraiser at a DC steakhouse. That ad turned out to be inaccurate: The fundraiser actually took place several days before the storm hit. On the day the advertisement suggests Murphy hosted the fundraiser, she met with President Trump to discuss Florida’s post-storm recovery efforts, something the Washington Examiner noted in response to Sturgill’s claims.

None of these Central Florida Post stories disclosed the financial transactions between Engels’ companies and the Sturgill campaign. Engels recently shared a video in which he follows Murphy back to her car after a local town hall event to confront her about the fundraiser. In the video, he repeatedly asks her, “Are you an elitist?”

In addition to running the Central Florida Post, Engels contributes to Infowars, where he has appeared on several occasions with Roger Stone, the former Trump adviser who hosts his own show on the network and also regularly guest-hosts Jones’ show. In June, Engels joined Stone on Infowars to discuss the fundraiser controversy. Engels acknowledged that Murphy—whom he referred to as a “deep-state Barbie”—had explained the fundraiser actually took place before the storm, but he suggested Murphy was “lying.” (There’s no indication Engels has endorsed Jones’ theories about 9/11 or Sandy Hook.)

Sturgill’s campaign isn’t shy about touting Engels’ work and has shared Central Florida Post stories on social media. The candidate recently highlighted a July 10 story Engels wrote about Sturgill’s “bold” immigration platform, as well as one noting Sturgill’s endorsements from the Gun Owners of America and from a local law enforcement group. Sturgill is also a long-time devotee to Stone, and Stone endorsed Sturgill’s run for Congress in June.

Infowars isn’t the only far-right organization to which Engels is tied. He wrote in the Central Florida Post last year that he had “attended Proud Boys meetups and gotten to know members all across the Southeast.” He’s also tweeted about what he’s described as his outings with Proud Boys members. Engels told the Orlando Weekly in a story published Wednesday that he has “many friends in the organization” and has “spent time at meet-ups, trying to investigate these accusations of racism, homophobia.” He added, “As a gay man, I’ve encountered nothing but an atmosphere of welcoming and intense love for America” from the group.

The Proud Boys have denied any connection to the racist alt-right movement, which they have denounced. Engels echoes that, stating in the past that the Proud Boys are “definitely not a racist organization.”