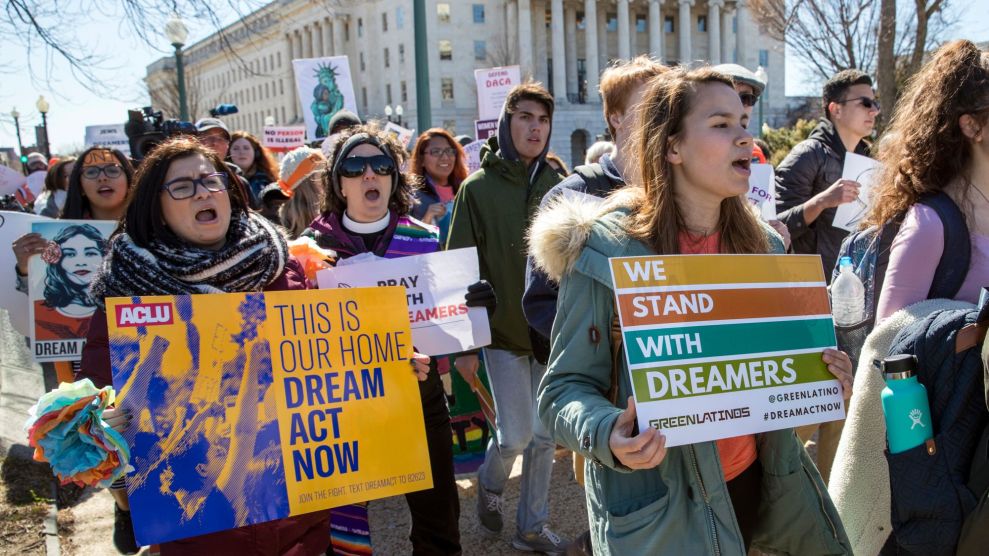 DACA recipients and other young immigrants march with supporters as they arrive at the Capitol on March 5. J. Scott Applewhite/AP Photo

Attorneys for seven states are asking a federal judge to end the Deferred Action for Childhood Arrivals program in a Texas court hearing Wednesday. The case could pave the way for a Supreme Court challenge to the program that protects certain young undocumented immigrants from deportation.

The states, led by Texas Attorney General Ken Paxton, filed suit in May and claim that the Obama administration exceeded its authority by implementing DACA in 2014. They’re hoping that Judge Andrew Hanen, of the U.S. District Court for the Southern District of Texas, will issue an injunction that would stop the government from accepting DACA renewals while the case is being argued.

President Donald Trump’s administration has declined to defend DACA in the Texas case, so the Mexican American Legal Defense and Education Fund is defending the program in court on behalf of 22 Dreamers. The state of New Jersey has also stepped in to argue in favor of DACA.

The Trump administration announced in September that it would phase out DACA over the course of six months. But the government has been forced to continue accepting DACA renewals since the beginning of the year, after legal challenges temporarily stopped the administration from ending the program. Last week, yet another judge ruled in DACA’s favor, saying that the government had to fully restore DACA and start accepting new applications as well as renewals.

But the Texas case is widely expected to put an end to this string of victories for Dreamers. Judge Hanen issued an injunction in 2015 blocking a similar program, Deferred Action for Parents of Americans and Lawful Permanent Residents. That program, known as DAPA, protected undocumented parents from deportation and allowed them to get work permits. After Hanen’s ruling, the case eventually made its way to the Supreme Court, where a 4-4 split allowed the injunction to remain in place.

Now, Texas and the other six states are arguing that DACA violates existing immigration law and oversteps the boundaries of the executive branch’s authority. In his 2015 ruling against DAPA, Hanen seemed skeptical about DACA’s legality as well—leading many immigration advocacy groups to expect that he’ll block the program after Wednesday’s hearing.

If Hanen does issue an injunction against DACA, it would conflict with the three other recent rulings on the issue, setting the stage for an eventual Supreme Court battle. Since Brett Kavanaugh’s confirmation would give the court a conservative majority, immigration advocates are worried about a Supreme Court challenge.

But it’s unclear what would happen to DACA in the meantime. As Vox’s Dara Lind has reported, it’s likely that, if Hanen blocks the program, the Supreme Court would consider issuing an emergency stay on Hanen’s ruling. But with only eight justices on the bench, the court could be split on the issue, and the conflicting lower court rulings would all stand.

Because of this uncertainty, advocacy groups are urging DACA recipients to apply for renewals now, even if their work permits won’t expire for a while.