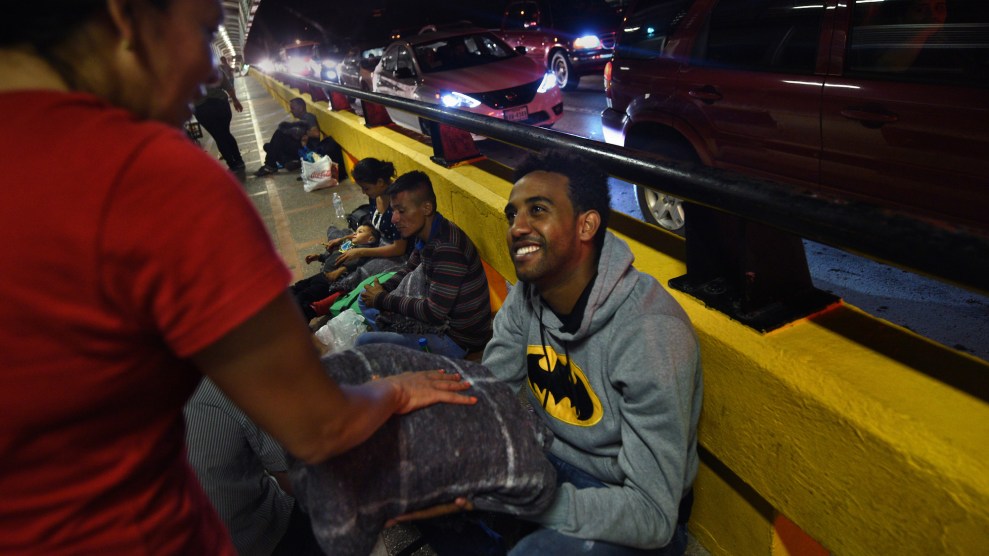 Abraham, an asylum-seeker from Eritrea, receives a blanket from Glady Cañas Aguilar, the head of a local nonprofit, as he waits on a bridge in Matamoros, Mexico, in July. Carol Guzy/ZUMA

Abraham, a 25-year-old man from Eritrea, stood on the bridge between Brownsville, Texas, and Matamoros, Mexico, wearing blue jeans, a gray hoodie emblazoned with the Bat-Signal, and white sneakers. It was a warm evening in early July, and as he bantered with other Eritreans, he appeared ready for a night out. Instead, he and about 10 other people from Africa were spending their weekend sleeping on the bridge and waiting for US immigration officials to let them set foot in the United States and request asylum.

Abraham was in much better spirits than Luis Miguel Montimo, the Honduran man sitting next to him who had spent three months heading north with his partner and one-year-old son. Abraham’s journey through Mexico was a breeze by comparison: He had flown to the border from southern Mexico after acquiring a transit visa in Tapachula, a small city on the border with Guatemala.

The hard part was his trip to Mexico, an odyssey of more than two months and 10,000 miles. He had fled conscription in Eritrea, flown to Brazil, bused to Ecuador, trekked through the Colombian and Panamanian jungles, and taken boats up through Central America before finally reaching Tapachula.

All the Africans I spoke to on the bridge had similar stories. European nations and Israel have made it harder for Africans to receive asylum, driving thousands to seek refuge in the United States. But most cannot get visas that allow them to fly directly to the United States, Mexico, or even Central America. So they often begin in Brazil or Ecuador, were there are more lenient visa laws, and wind their way across two continents on a months-long journey.

President Donald Trump frequently, and incorrectly, portrays the immigrants arriving at the southern US border as criminals with ties to the Central American gang MS-13. But in recent years, a growing number of these people are coming from halfway around the world—Africa and Asia—fleeing dangerous regimes, persecution, and economic hardship. While there are far more Central American asylum-seekers traveling through Mexico to the United States, the number of African and Asian migrants detained by Mexican officials increased more than sevenfold between 2007 and 2017, rising from fewer than 1,000 to more than 7,000.

The Trump administration is now considering three plans that could make it impossible for many of these far-flung migrants, as well as large numbers of Central Americans, to receive asylum in the United States. One proposal would require people to apply for asylum from abroad, forcing asylum-seekers to navigate an incredibly complex legal system thousands of miles away from US lawyers and immigration judges. Another would effectively block people from receiving asylum if they traveled through more than one country to get to the border or spent more than two weeks in any one country. That would essentially bar Africans, Asians, and most Central Americans who travel through Mexico from getting asylum. A third proposal, which requires either congressional action or Mexican cooperation, would force asylum-seekers passing through Mexico, including those from Asia and Africa, to apply to reside in Mexico rather than the United States. If they reached the US border, they’d be turned back and told to apply for asylum in Mexico instead.

Abraham’s route to Matamoros is typical of the incredible lengths that people from across Africa and Asia—mostly South Asia—take to reach the United States. After flying to Brazil in April, he traveled to Ecuador by bus and then headed into Colombia for the most dangerous part of the journey. There is only one break in the 19,000-mile Pan-American Highway that runs from Alaska to the southern tip of Argentina: a roughly 60-mile stretch of rainforest and swampland between Colombia and Panama known as the Darién Gap. Migrants walking through it must battle dehydration, disorientation, disease, deadly snakes, narco-traffickers, and the remnants of the Revolutionary Armed Forces of Colombia, the left-wing guerrilla group better known by its Spanish initials FARC.

Abraham said he spent seven days trekking to Panama. “Jungle and river—river like this,” he said, pointing to the Rio Grande running below the bridge. He pulled up a pant leg to reveal a small, seemingly permanent indentation left by the boot he wore that week. He was also robbed in the Panamanian jungle but managed to keep some of his money. “We know that there is going to be thieves,” he explained. “So we hide it…Sometimes they find. Sometimes they don’t.” Filmon, another 25-year-old Eritrean whom Abraham met farther north, told me that his group got lost in the jungle and didn’t emerge for eight days. (Filmon had practice with these long walks: He had fled Eritrea by walking 10 days to Sudan.)

Once in Panama, Abraham received temporary immigration papers that allowed him to travel to Costa Rica. (Others have been sent back into the Darién.) From there, he took a boat to Honduras and then another to Guatemala, where he crossed into Mexico. Africans have a much easier time passing through Mexico than Central Americans do. In 2017, only six Africans were removed from Mexico, compared to more than 78,000 Central Americans, according to Mexico’s interior department. Instead of deporting African migrants, Mexican immigration officials usually give them 20-days transit visas that allow them to reach the US border. (Deporting Central Americans is much less expensive and complicated for Mexico, and it likely does more to appease US officials focused on stopping Central American families and children from reaching the United States.)

The typical African migrant is, like Abraham, a man in his twenties with some advanced education and proficiency in a second language, according to a 2016 report from the Organization of American States. Like all Eritrean men, Abraham was conscripted into a national service system that came out of Eritrea’s decades-long conflict with neighboring Ethiopia, from which Eritrea gained independence in 1993 following a civil war. Conscripted Eritreans can find themselves forced to perform barely paid labor under brutal conditions for more than a decade. “When you are in the service for the country, it doesn’t finish,” Abraham said. The consensus view of Eritrean conscription is captured by a 2014 headline in The Economist: “Miserable and useless.” Not surprisingly, hundreds of thousands of people have fled the country to avoid conscription.

European nations have rejected many asylum claims from Eritreans and other Africans over the objections of human rights experts. That has likely led more people from Africa and Asia to seek asylum in the United States. Abraham has an uncle who lives in Switzerland but told his nephew go to America instead and paid for the trip, which he said cost about $3,000 from Brazil onward. Filmon said his trip cost $9,000 in total and that his mother had sold everything she owned to help to pay for it. About 75 percent of Eritrean asylum-seekers win asylum in the United States, compared to about 25 percent of people from the Northern Triangle of El Salvador, Guatemala, and Honduras.

When we we met on the bridge, Abraham and Filmon wanted to know where they would be taken once they crossed the border. It was hard to say, I said. They would normally be detained at first, but it was impossible to know how long the detention would last. For the time being, they were just waiting to enter the United States. They had traveled more than 10,000 miles, only to be stopped a few steps from the border by US officials who now stand at the midway point of the bridges. Three days later, all the Africans on the bridge had been allowed to cross, according to Ingrid Salazar Cañas, a Matamoros resident who is helping migrants on the bridge.

Abraham and Filmon had many more questions about the vagaries of the US immigration system that night. Most of them were difficult to answer with any certainty. But one of Filmon’s question was simple: Where did the United States begin? I pointed to spot a few feet ahead, where the pavement changed patterns. It seemed hard for him to believe that the border was something you could just walk across after growing up in a country on the verge of war with its neighbor.

A few days later, Eritrea and Ethiopia announced a peace deal under which flights will resume and phone lines will reopen. The latest Eritrean conscripts have reportedly been told their service will be limited to 18 months. It could end up being bittersweet news for Abraham and other Eritreans whose asylum claims are presumably pending. After they risked their lives on boats and jungle treks, US officials could decide that they no longer have something to flee from.