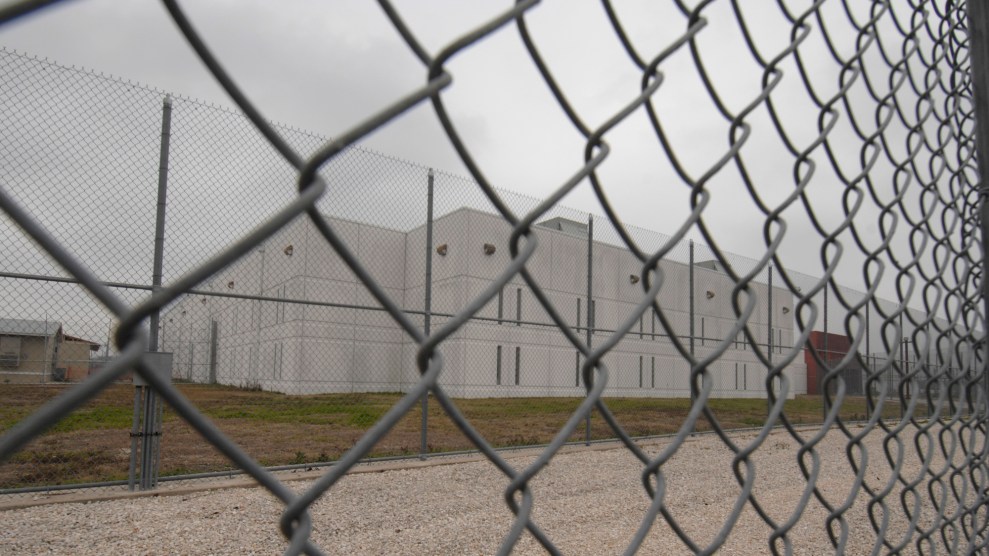 The perimieter of the T. Don Hutto detention center in Texas in 2007. Robert Daemmrich Photography/Getty

In late June, amid the uproar over President Donald Trump’s family separation policy, the commissioners of a conservative Texas county voted to end an agreement that allows Immigration and Customs Enforcement to detain about 500 women at the T. Don Hutto detention center near Austin. But ICE may be working to keep the controversial facility open anyway.

Williamson County’s agreement with ICE will end on January 31, 2019, and the county will also break ties with CoreCivic, the private prison contractor that runs the facility. But there are no guarantees that it will lead to the closure of the detention center, which has faced numerous allegations of sexual abuse and has held at least 35 mothers who were separated from their children under the Trump administration’s policy.

On Thursday, ICE posted a request on its website seeking information from potential operators for a 500-woman detention facility near Austin, which is about 15 miles from the Williamson County line. Two Texas immigrant advocates say Hutto fits the criteria included in the post, meaning that ICE is likely trying to keep the facility open under a new contract.

ICE may be able to do that by contracting directly with CoreCivic or signing a cooperation agreement with another local government entity. Right now, ICE contracts with Williamson County, which in turn serves as an intermediary to CoreCivic. ICE may simply be able to cut out the middleman and work with a contractor directly.

Denise Gilman, the director of the University of Texas at Austin’s immigration law clinic, says in an email that ICE’s request for information “fits Hutto very well.” Bob Libal, the executive director of Grassroots Leadership, an Austin-based advocacy group that works to abolish private prisons, says ICE appears to be trying to figure out how to keep open one of the “most notorious” detention centers in the country despite opposition from Williamson County.

Bethany Carson, an immigration researcher and organizer at Grassroots Leadership, said in a statement that her organization was “outraged, but not surprised” by the request for information. “The community has made it crystal clear: ICE is not welcome,” she said. “This place is so bad that Williamson County Commissioners ended the contract so they wouldn’t be liable for its litany of abuses.”

The posting from ICE is titled “Detention Services 500 Bed Females” and asks for information about running an immigration detention facility within 50 miles of Austin and 60 minutes of Austin’s international airport. Hutto meets both of those requirements. ICE says that it intends to release a request for proposals within 30 days that allows it to accept bids.

In 2012, Williamson County backed Mitt Romney by 21 points over Barack Obama, and Trump carried the county by 9 points in 2016. Yet in June, county commissioners voted 4-1 to terminate the agreement with ICE. (The vote came a week after Trump ended his family separation policy, but the tensions over how to reunite families were ongoing.) CoreCivic pays Williamson County $8,000 per month to cover the costs associated with serving as an intermediary between the company and ICE.

There are no guarantees that the vote will lead to the closure of the detention center, which has faced numerous allegations of sexual abuse.

After the vote, Williamson County commissioner Terry Cook told the Austin American-Statesman that the county “didn’t need to be in this business” of detaining immigrants for the federal government. The commissioners’ decision followed months of pressure from Grassroots Leadership, which pointed to a long history of allegations about abuse and poor conditions inside Hutto.

“The facility does have a history of violations of the human rights and the dignity of the people detained there,” says Kate Lincoln-Goldfinch, an Austin-based immigration lawyer who has worked with detainees at Hutto for more than a decade.

Those complaints stretch back to 2006, amid a George W. Bush-era crackdown on immigrants, when CoreCivic—then known as the Corrections Corporation of America—converted the former medium-security state prison into a family detention center where detained children wore prison-like uniforms and were kept in cells for around 12 hours a day, according to an ACLU lawsuit. The staff, most of whom came from backgrounds in corrections, woke young children up at night by shining lights in their faces, forced them to stand still during frequent head counts, and forbade them from having crayons or stuffed animals in their cells, The New Yorker reported in 2008. (CoreCivic maintains that it ran Hutto “in accordance with ICE’s requirements at the time.”)

ICE stopped sending families to Hutto in 2009 and converted it into the country’s sole female-only ICE detention center. But the problems didn’t stop there. In 2010, a CoreCivic guard admitted to groping Hutto detainees he was transporting to airports and bus stations under the guise of “frisking” them.

Abuse allegations resurfaced last November, when Laura Monterrosa, a 23-year-old asylum seeker from El Salvador, wrote a letter claiming that a female guard had repeatedly harassed and groped her. ICE called those claims “unsubstantiated,” but after Monterrosa came forward, other women made similar complaints, and the next month the FBI began investigating the case. In February, citing the women’s allegations, more than 40 members of Congress soon signed onto a letter asking ICE to review its handling of sexual assault cases in Texas. (Monterrosa was released in March.)

CoreCivic is also facing a class-action lawsuit brought by former detainee Martha Gonzalez over a work program inside Hutto that allegedly paid detainees $1 to $2 per day to clean medical units and bathrooms, strip and wax floors, do laundry, prepare and serve meals, and perform clerical work. (Running its ICE detention center using undocumented immigrant labor would be nothing new for CoreCivic: In 2007, ICE arrested 10 Hutto employees who had immigrated illegally.)

After the June vote, Claudia Munoz, the immigration programs director for Grassroots Leadership, said the decision came as a surprise but warned against complacency. “We know that this doesn’t mean [the women] get released right away, so we will have to fight for that,” she said. “We have six months to make sure that these women are not just transferred to another detention center.” Now a third possibility appears increasingly likely: Migrant women might simply remain in the scandal-plagued facility.