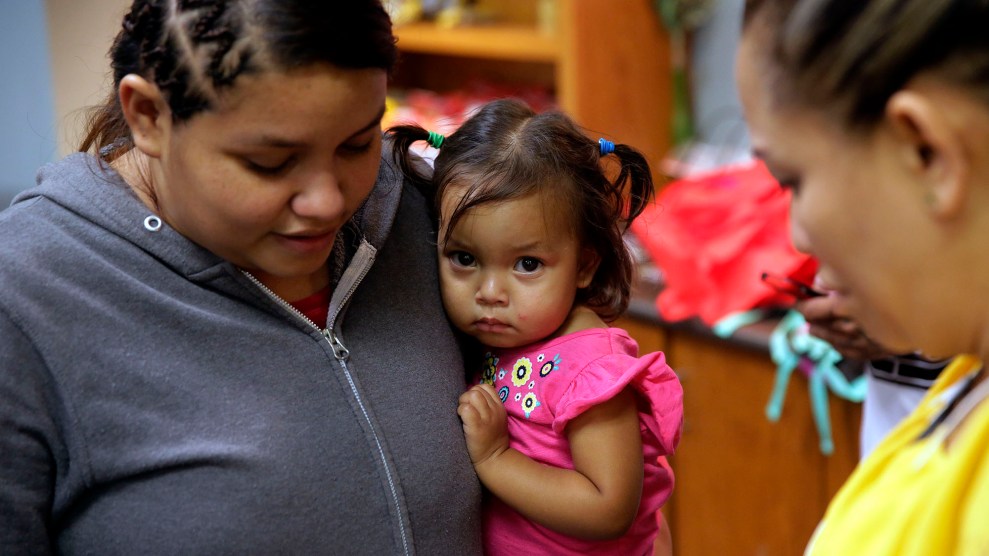 Jennifer Maradiaga, left, holds her daughter, Mia, 1, after they and other family members were reunited, Monday, July 23, in San Antonio. The children had been taken to a shelter in Arizona shortly after they had tried to cross the Rio Grande about two months earlier.AP/Eric Gay

Update 8:03 p.m. ET: Trump administration officials said on a press call Thursday evening that the administration is on track to reunite all eligible parents who are in the custody of US Immigration and Customs Enforcement by the Thursday night deadline. Of the up-to 2,551 children of separated parents covered by the ACLU lawsuit, the government said 1,442 have been reunited with parents who were in ICE custody.

The government said that 711 children in the custody of the Department of Health and Human Services’ Office of Refugee Resettlement would not be reunited by the deadline because they were not eligible for reunification, or had parents who could not be reunited with them before Friday. Within that group, the parents of 431 children were deported without their kids, 120 allegedly waived their right to reunification, 79 were released from government custody, and 67 had a “red flag” indicating a potential security risk. The location of 94 children’s parents was “under case file review,” according a Thursday court filing.

The government had previously stated that some of the parents who are not in the United States may have voluntary returned to their home countries. An ICE official confirmed that they were deported. “Yes, they’ve been deported,” he said. “We don’t keep track of individuals once they’ve been deported to foreign countries.”

Federal judge Dana Sabraw set the Thursday deadline when he issued a temporary injunction last month that requires the Trump administration to reunite parents with children between the ages of 5 and 17. The Trump administration has touted its reunification efforts in court and said it expects to meet the deadline for all of the more than 1,600 parents that it says are currently eligible for reunification.

But about 900 parents are expected to remain separated from their children because the Trump administration argues that they are not immediately eligible for reunification. More than half of those parents will not be reunified because the Trump administration believes they are no longer in the United States. Other ineligible parents may have waived their right to reunification or been deemed ineligible because of criminal records, or other safety concerns.

Lee Gelernt, the lead attorney for the American Civil Liberties Union, the organization that secured the injunction, criticized the government’s apparent self-satisfaction. “The government shouldn’t be proud of the work they’re doing on reunification,” Gelernt told reporters on Thursday. “It should just be, ‘We created this cruel, unconstitutional, inhumane policy. Now we’re trying to fix it in every way we can and make these families whole.’”

“Not, ‘We’re proud we’re doing the reunifications,’ as if they’re showing to fix some natural disaster,” he continued. “This is a disaster that they created.”

The deadline for reuniting children under age five was on July 10. The government claimed that it met that deadline by reuniting 57 young children with their parents. The parents of 46 kids under 5—a dozen of whom had already been deported—were deemed ineligible for reunification by the July 10 deadline.

At least another 130 parents—and potentially more than 200—with children five and older will remain separated because the government claims that they have waived their right to reunification. On Wednesday, the ACLU filed more than 100 pages of declarations that accused the government of misleading and coercing separated parents into giving up their right to reunify with their children.

Five separated fathers told Luis Cruz, an attorney at Paul, Weiss, Rifkind, Wharton & Garrison, that they felt intimidated into signing a form that relinquished their reunification rights. Four of the fathers said they were taken to a room used as a church at the Otero detention facility in New Mexico along with 30 to 50 other people, according to Cruz’s declaration. One said the process of explaining and signing the form took four minutes at most.

“The evidence is overwhelming that parents have signed forms they did not understand,” the ACLU wrote in the court filing. “Some forms were presented in English to parents who did not speak that language…Some parents with limited or no literacy were not told what they were signing.”

The ACLU filed the declarations to support its argument that the government should be required to wait at least seven days before deporting reunified families. That waiting period would provide pro bono lawyers with additional time to inform separated families about their legal options. The government is fighting that motion and says that the current 48-hour waiting period is sufficient. It also argues that the cost of detaining families for additional time poses an unnecessary burden on American taxpayers.

Judge Sabraw will hear arguments about the waiting period on Friday. Gelernt said that waiting a week should not be a problem. “The government took these families and separated them,” he said. “And many of the children were separated for months and months and months. And now the government could at least give them seven days to figure out their options.”