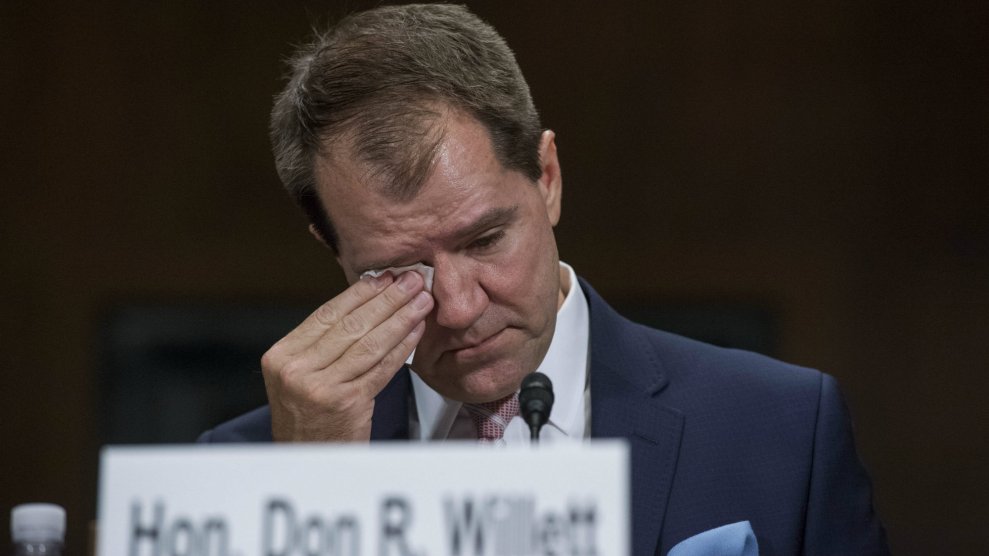 Only one person on President Donald Trump’s short list to replace retiring Supreme Court Justice Anthony Kennedy is on record with his support for a “constitutional right to marry bacon.”

I could support recognizing a constitutional right to marry bacon. pic.twitter.com/HKPW6tE4H6

That man is 5th Circuit Court of Appeals Judge Don R. Willett, who wrote this tweet as a way to assert his opposition two months before the Supreme Court declared a constitutional right to same-sex marriage in Obergefell v. Hodges. Dubbed the “Tweeter Laureate” by the Texas House of Representatives during his 12-year stint as a justice on the state’s high court, Willett describes himself as an “Extravagantly blessed husband.” But one tweet in his over 25,000 tweets about food, sports, and the exploits of the three children he calls the “3 wee Willetts” might come back to haunt him.

A former “rodeo bull rider” who once called himself the “most conservative” justice on the Texas Supreme Court, Willett won fame in the Lone Star State for his outspoken defense of right-wing values and his activist approach to jurisprudence. “I oppose judicial activism, inventing rights not rooted in the law,” he once wrote. “But the opposite extreme, judicial passivism, is corrosive, too—judges who, while not activist, are not active in preserving the liberties, and the limits, our Framers actually enshrined.”

His staunch conservatism did not go unnoticed, and in October 2017, Trump tapped him to join the 5th Circuit, a designation this bow-tie-wearing jurist said he was “honored and humbled” to receive. But during the 2016 presidential campaign, Willett did not act as if he would ever consider Trump his commander in chief, much less the person who might consider him for a Supreme Court appointment.

There was the time he mocked Trump’s appeal to evangelical voters.

Trump to "the evangelicals"—

"I'll be the best thing that's ever happened to them."

Or the many, many jabs he took at Trump University’s expense.

Low-energy Trump University has never made it to #MarchMadness. Or even to the #NIT. Sad! 🏀 pic.twitter.com/DWcfJOZkPu

But the one tweet Willett probably wishes he could take back concerned Trump’s potential choice of a Supreme Court justice. Like a true Twitter Laureate, he delivered it in the form of a haiku:

Who would the Donald
Name to #SCOTUS? The mind reels.
*weeps—can't finish tweet* pic.twitter.com/a326AP0mN1

Perhaps it is no surprise the White House reportedly told Willett after his nomination to the 5th Circuit to “take his Twitter account down & behave himself.” That exile lasted just shy of 48 days. Soon enough, @JusticeWillett was back to his 113,000 followers but restricted his tweets to 8 Mile memes and a shout-out to Texas-shaped corn bread.