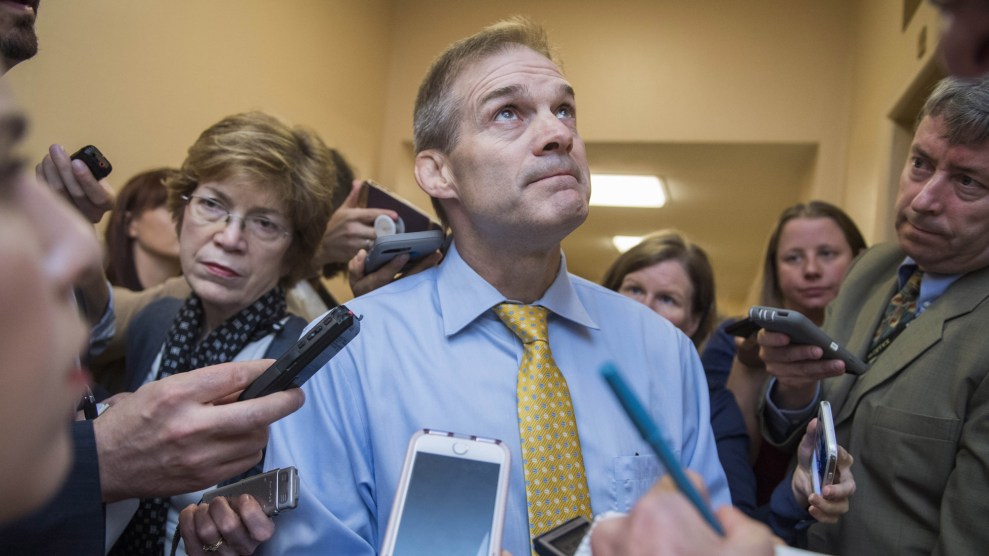 On Tuesday, NBC News published a bombshell report on Ohio Republican Rep. Jim Jordan, a powerful conservative on Capitol Hill who’s considered a possible future speaker of the House. Jordan was an assistant wrestling coach at Ohio State before he entered politics, and the university is currently investigating allegations of sexual abuse against the program’s longtime team doctor. Three former wrestlers told NBC that Jordan was aware of the abuse at the time, and one said he told Jordan about it directly. Jordan claims he had no knowledge of the doctor’s alleged predations.

Prominent conservatives, including President Donald Trump, were quick to defend Jordan. “I believe him 100 percent, no question in my mind,” Trump told reporters on Friday. Conservative pundit Brent Bozell channeled the feelings of others on the right when he suggested the allegations were part of a conspiracy to stop Jordan’s ascent.

Regarding recent allegations against Rep. Jim Jordan, this reeks of dirty tricks. Why did it take 20 years for someone to make this accusation? Could it be because Rep. Jordan is running for GOP House leadership?

It’s not especially surprising that the president, who once bragged on camera about committing sexual assault, would question the testimonies of sexual abuse victims, but the intensity of Jordan’s defenders only serves to highlight how tepid Jordan’s response has been.

Although Jordan has consistently denied having any knowledge of the abuses, NBC reported that he had not responded to requests for an interview from university’s investigators. On Friday, after another former wrestler—the fifth—came forward to say Jordan knew, the congressman reiterated to Fox News’ Brett Baier that he believed his accusers were lying, perhaps for political reasons. (Never mind that the abuse scandal first broke months ago, and the question of “who knew?” is an obvious one all such scandals.)

In response to the wrestlers’ claim that the doctor’s abuse was discussed openly in the locker room, Jordan insisted that “conversations in a locker room are a lot different than allegations of abuse.”

Locker room talk probably isn’t the framing you want in such a situation, and invoking it sounds like a distinction without a difference—what kind of coach would hear that kind of talk and not investigate?

The story doesn’t seem to be going away, in any case, and Jordan isn’t doing much to make it so.