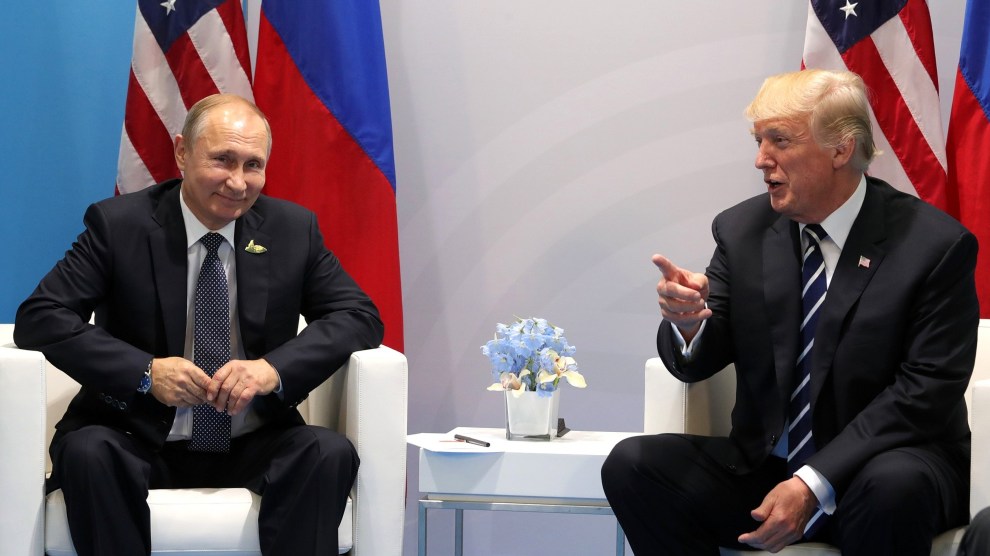 With his efforts to help Donald Trump become president by meddling in the 2016 election, Vladimir Putin has already done more to advance Russia’s foreign policy goals and worldview than anything he could have imagined in his wildest dreams as a longtime KGB agent. He has succeeded in sowing discord in the West without firing a shot, at low cost and with relatively few consequences (save for some limited sanctions against Russian oligarchs) as the Kremlin continues nefarious cyber and propaganda activities around the globe.

“One of Putin’s chief aims,” says Charles Kupchan, senior fellow at the Council on Foreign Relations, “is to weaken and divide the West. Trump is playing right into the Kremlin’s hands, doing Putin’s job for him.” Or, as human rights activist and former world chess champion Garry Kasparov says, Trump is “ticking every box on Putin’s wish list.”

At a rally in Montana last week, Trump mocked critics for calling out the Russian president’s history as a Soviet intelligence official. “Putin is fine,” Trump said.

As the two leaders prepare to shake hands again in Helsinki on July 16, here are 10 actions that Trump has taken in office that align with long-held Kremlin goals. Amazingly, many of these steps would have been anathema to the Republican Party going back decades, but they have all been accepted with barely a peep from today’s GOP.

By opting out of the global climate agreement and taking other steps to weaken fuel standards and clean air regulations, Trump has effectively sided with the fossil fuel industry, a Putin-pleasing position since oil and gas are the most important pillars of the Russian economy.

By unilaterally withdrawing the United States from the multinational Iran nuclear agreement, Trump has demonstrated that the United States is not a reliable negotiating partner that can be trusted to stand by its agreements with other Western powers. Potential sanctions against Iran’s oil industry have also contributed to driving up global oil prices, putting more money in Putin’s coffers.

By withdrawing from the Trans-Pacific trade pact, threatening to withdraw from the World Trade Organization, and threatening to jettison NAFTA—as well as implementing tariffs on America’s closest trading partners—Trump may be putting the United States on the precipice of a highly disruptive trade war with China, Europe, Canada, and Mexico. Trump’s tariffs alone are alienating key allies, weakening the US economy and upending the rule-based international trading system.

War on the free press

By constantly attacking the US media as “fake news” and with the Stalinesque parlance “enemy of the people,” Trump has undermined the free press as an important component of democracy—also doing so by echoing Russian propaganda techniques that leave citizens less able to discern truth from lies.

By attacking the NATO Alliance and the European Union (by backing Brexit), Trump weakens the foundation of American foreign policy for the last seven decades along with NATO’s stand in opposition to Russia expansion. Weakening the Western alliance has been a goal of Russian foreign policy since shortly after World War II.

By saying that Putin should be allowed to return to the G-7, made up of the world’s richest industrialized nations, Trump shows his indifference to, if not acceptance of, Russia’s aggression against Ukraine and its takeover of Crimea—which Trump justified because the local population “speaks Russian”. (He also blamed Barack Obama for it.) This undermined previous multilateral sanctions against Russia led by the United States.

By suspending US military defense exercises with South Korea—essentially agreeing with Kim Jong Un that they were “provocative” war games—Trump has made the US defense posture weaker in Asia and again made the US seem to be a less reliable military partner to its key allies.

Despite limited missile strikes, the Trump administration seems to have no coherent policy in Syria. By declaring the defeat of ISIS there, and by telling US military leaders he wants American troops out, Trump has weakened the US ability to counter Russian (and Iranian) dominance in Syria, giving them a freer hand in their support of the Assad regime.

By discarding human rights concerns in his meetings with autocratic foreign leaders, Trump has squandered American soft power, contributing further to an erosion of US moral authority around the world and fueling American unpopularity.

Trump has shown himself to be capable of destabilizing the existing world order, but he seems incapable of building better alliances and strengthening democracies, the heart a global doctrine led by the US for nearly 70 years. In its place, Trump seems to be creating a world of bilateral power politics—one in which Russia, China, and other authoritarian states can excel. Far from making America great again, Trump has diminished the US in the eyes of most of the democratic free world while making Putin seem more statesmanlike. Putin must feel he has already gotten a full return on his investment in Trump, and that he can look forward to the possibility of America’s global stature diminishing further in the years ahead.