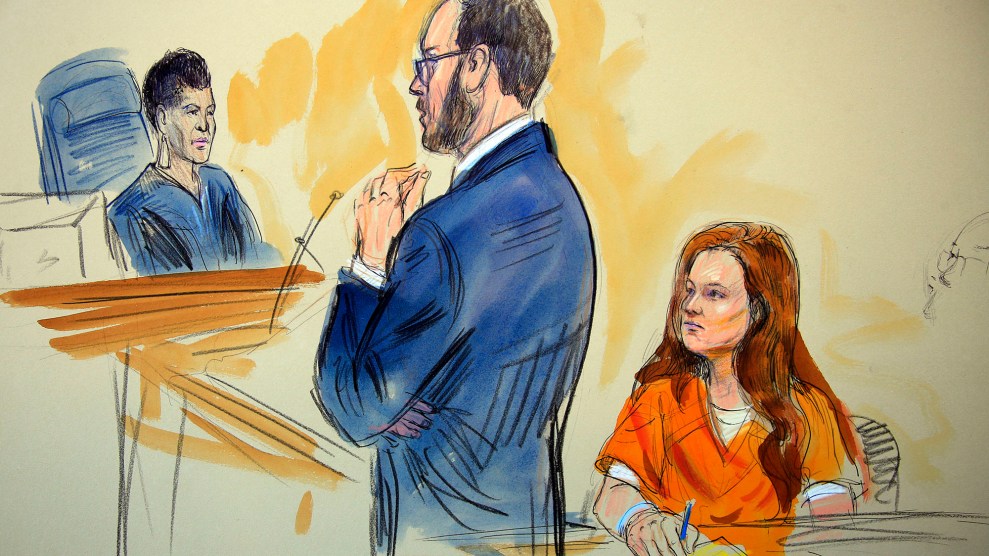 Facts matter: Sign up for the free Mother Jones Daily newsletter. Support our nonprofit reporting. Subscribe to our print magazine.
Update: Prosecutors suggested in a September 7 motion that their claim that Butina offered sex for a job was “mistaken.” Butina’s lawyer has argued prosecutors mischaracterized Butina’s text messages with a longtime male friend in which she jokingly suggested repaying a personal favor with sex.
Maria Butina, the 29-year-old Russian gun rights activist indicted this week for acting as an unregistered foreign agent, was involved with suspected Russian intelligence officials and used sex to gain access to conservative power players, according to a court filing submitted by federal prosecutors Wednesday.
The pretrial detention memo, released ahead of a court hearing, contends that Butina should be denied bail because she “poses a serious risk of flight.” The document supports that claim with explosive new allegations. It maintains that Butina, who recently received a graduate degree from American University, was an undercover Russian agent, working to obtain access to top Republicans and influence them on behalf of the Russian government.  The “defendant engaged in a years-long conspiracy to work covertly in the United States as an undeclared agent of the Russian Federation in order to advance the interests of her home country,” prosecutors charged. “The plan was calculated, patient, and directed by the Russian Official”—a reference to Alexander Torshin, the deputy head of Russia’s central bank and a senior official in Vladimir Putin’s party.
The new filing says that the FBI has uncovered evidence that Butina “was in contact with officials believed to be Russian intelligence operatives.” She had contact information for “individuals identified as employees of the Russian FSB”, the main successor agency to the KGB, the memo states. Butina, according to the document, also possessed a handwritten note that contained this line: “How to respond to FSB offer of employment?” In addition, the FBI “observed Butina in the company of a Russian diplomat in the weeks leading up to that official’s departure from the United States in March 2018. That Russian diplomat, with whom Butina was sharing a private meal,” was a suspected Russian intelligence officer.
The filing claims that Torshin—who is not identified by name—considered Butina a covert agent. In a message to Butina in March 2017, he compared her to Anna Chapman, a member of a group of Russian sleeper agents living in the United States who were arrested in 2010. (This case was the inspiration for the cable television show The Americans.) Butina, according to the memo, told Torshin in October 2016 that a “Russia-USA friendship society” she was involved with was “currently ‘underground.'” Such comments, the prosecutors maintain, show that “the defendant is considered to be on par with other covert Russian agents.”
Prosecutors say Butina used sex and her status as a student to advance her covert influence campaign. They allege that Butina formed a “personal relationship” with an American. Although he is not named by prosecutors, that person is reportedly Paul Erickson, a conservative activist who helped Butina and Torshin gain access to top officials at the National Rifle Association and the Trump campaign. Erickson and Butina developed a personal relationship and lived together, but “[Butina] appears to treat that relationship as simply a necessary aspect of her activities,” prosecutors say. Butina complained about living with him, they note. The memo also states, “On at least one occasion, Butina offered an individual other than [Erickson] sex in exchange for a position within a special interest organization.” The filing does not identify the organization, but the case against her centers on her interactions with the NRA and Republican officials.
The memo says that Butina’s status as a graduate student was a ruse and that she sought a visa only after “a lengthy discussion of the risks associated with traveling to the United States repeatedly on a tourist visa.” She used Erickson for help completing graduate assignments, prosecutors say: “In other words, although she attended classes and completed coursework with outside help, attending American University was Butina’s cover while she continued to work” for Torshin.
Butina is a flight risk, the prosecutors assert, because of her ties to an unnamed Russian oligarch. Butina’s correspondence called the oligarch her “funder,” prosecutors say. The oligarch is not identified in the memo, which notes that Forbes this year put his net worth at $1.2 billion.
Read prosecutors’ memo here: