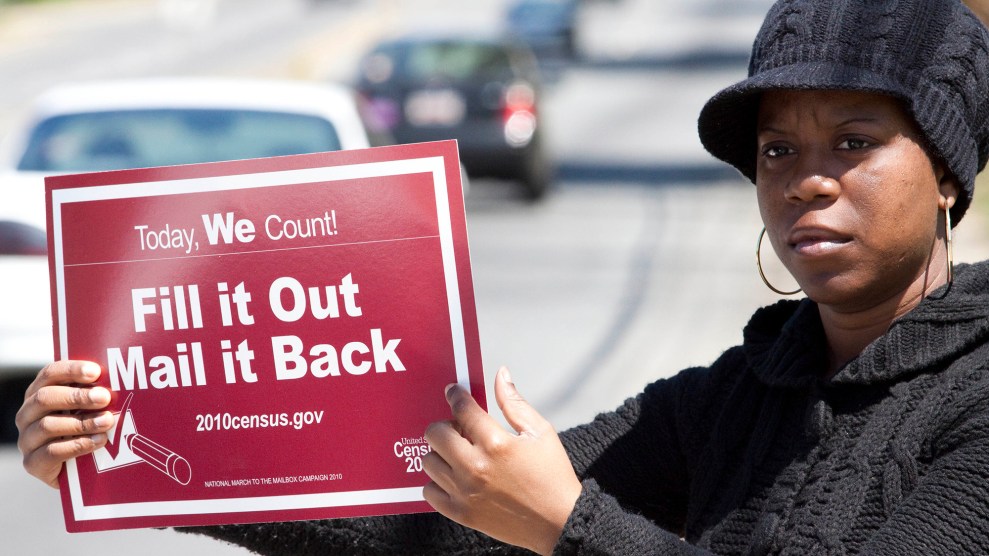 Shanda Burrell of Charlotte holds a sign at a rally by US census advocates at the Mas Jid Ash-Shaheed mosque in Charlotte, NC to convince people to fill out the 2010 census form. Jason E. Miczek/AP

On January 3, 2018, the Census Bureau was deliberating whether it should add a citizenship question to the 2020 census, a politically explosive issue with huge costs. As civil rights advocates argue, the question on whether someone is a citizen is designed to spark fear in immigrant respondents and undercount heavily-immigrant communities, which would result in diminished political representation and fewer federal resources in these communities. But under President Trump, the bureau was contemplating adding the question at the last minute. The official reason, now acknowledged to be a ruse, was that the Justice Department’s Civil Rights Division had requested the change.

So three days into the new year, the Census Bureau’s experts proposed an alternative idea. In a memo to the acting head of the bureau, the Census Bureau’s lead scientist noted that adding a citizenship question would cost the agency millions while actually decreasing the accuracy of the decennial count. Instead, the memo suggested, the bureau could implement an alternative that would create even better data for the Justice Department at a fraction of the cost, without harming the integrity of the census. But nearly three months later, the Trump appointees in charge of the bureau decided to add the citizenship question despite the warnings from its own analysts.

The memo warned that the addition of the citizenship question would “harm the quality of the census count.”

The January 3 memo was among more than 2,400 pages of internal documents filed in federal court Monday as part of ongoing litigation over the citizenship question. The admnistration is battling six lawsuits from over two dozen states and cities, as well as outside groups, over the last-minute addition of the question. The suits argue that quizzing people about their citizenship status threatens the integrity of the census, in contravention of the Constitution’s mandate to carry out an “actual Enumeration” of the entire population. The internal memo shows that the bureau’s experts reached the same conclusion.

According to the Commerce Department, which houses the Census Bureau, the Justice Department had requested that the question be added to the census in order to improve data that could be used to protect voting rights under the 1965 Voting Rights Act, though the census has omitted the question since 1950 and it has has never before been needed to enforce the law.

In the January memo, the Census Bureau’s chief scientist and associate director for research and methodology, John Abowd, and his team found that adding the question would increase the cost of the census by at least $27.5 million by necessitating more follow-up work to reach households that would fail to respond. “It is worth stressing that this cost estimate is a lower bound,” the memo read. Moreover, the memo warned that the addition of the citizenship question would “harm the quality of the census count.”

The memo laid out two alternatives, one of which would create higher quality data at a much lower cost. Rather than add the citizenship question to the census, Abowd and his team suggested that the bureau could use preexisting government data on citizenship rates and integrate that into the final 2020 census data. While an analysis of how much this option would cost was not complete, the memo estimated that it be less than $1 million. Further, it projected that it would result in better data for the Justice Department. Burton Reist, one of the preparers of the memo, noted in an email also released in the document dump that, “I think it’s important to stress again that the impacts on cost and quality [of adding the question] could be higher than we calculate.”

The Commerce Department opted to add the question against the technical advice of its own analysts, as well as opposition from past Census directors and outside experts. A department spokesman said in a statement that the documents filed Monday demonstrate “the rigorous and exhaustive process undertaken by the Department of Commerce in considering whether to add a citizenship question,” but did not immediately explain why the department did not adopt the alternative recommended by its experts. But the astonishing set of documents contain evidence that the Justice Department’s stated reason for its request was actually part of a larger scheme to get citizenship into the census. In May 2017, Commerce Secretary Wilbur Ross wrote an email to two department officials: “I am mystified why nothing [has] been done in response to my months old request that we include the citizenship question. Why not?”

The rest of the email is blacked out, but the response later that day from Earl Comstock, the Commerce Department’s director of policy and strategic planning, stated: “On the citizenship question we will get that in place.” He then laid out how. “We need to work with Justice to get them to request that citizenship be added back as a census question, and we have the court cases to illustrate that DoJ has a legitimate need for the question to be included. I will arrange a meeting with DoJ staff this week to discuss.”

This email undercuts the story, as laid out personally by Ross, that the request for the citizenship question came from the Justice Department. Earlier this year, Ross testified before a congressional panel and said that Justice Department officials “initiated the request” for the inclusion of the question in December of 2017. But in court filings, Ross seemed to acknowledge a different set of facts, stating that he first contemplated adding the citizenship question in February 2017, shortly after his confirmation. As Mother Jones reported previously, he acknowledged to a federal court in New York that he had approached the Justice Department, not the other way around, after consulting with “other senior administration officials” who had “previously raised” the issue. One of these officials was then-White House adviser Steve Bannon.

Earlier this month, Judge Jesse Furman in the Southern District of New York, who is presiding in the case over the citizenship question, blasted the department’s handling of the issue in public, stating that there is a “strong showing of bad faith” on the part of the administration. “It now appears these statements were potentially untrue,” Furman said of Ross’ claims that the question was added at the Justice Department’s request. “It now appears that the idea of adding a citizenship question originated with Secretary Ross and not the Department of Justice.”

The documents released Monday represent only part of the total that Furman ordered released; the rest are expected later this week.