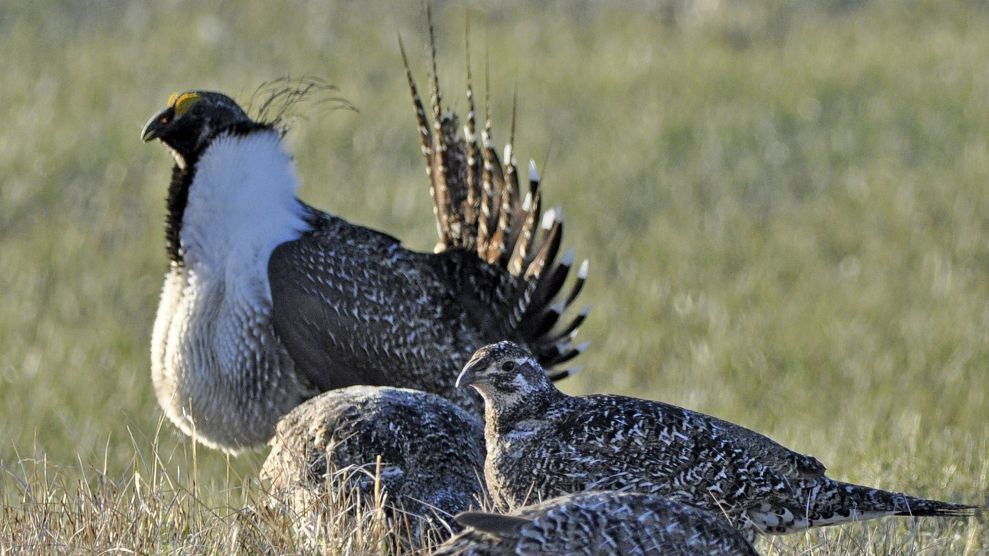 In a rare victory for environmentalists in the Trump era, the latest draft of a major defense spending bill has been stripped of provisions that targeted environmental protections, according to documents from the House-Senate Conference Committee released early this week. The policy riders would have been devastating for several imperiled species across the country, including the Western greater sage-grouse, the lesser prairie chicken, and the American burying beetle.

As Mother Jones reported Monday, the provisions were largely championed by House Natural Resources Chairman Rob Bishop (R-Utah) and engendered fierce opposition from Democrats. The riders would have removed federal protections for the American burying beetle and prevented the Fish and Wildlife Service from listing the greater sage-grouse and its cousin, the lesser prairie chicken, under the Endangered Species Act for at least 10 years. The sage-grouse has been a lightning rod species for conservationists, land developers, and hunters in the West for years.

“The National Defense Bill should be about national defense, not endangered species,” Rebecca Riley, a senior attorney at the Natural Resources Defense Council, tells Mother Jones. “Including [the riders] was just completely inappropriate.”

Last week, liberals voiced a similar opinion. In a letter sent to lawmakers, Democrats warned, “The 2019 Defense Authorization bills contain numerous, controversial, anti-environmental provisions that are unrelated to military readiness. These deceptive provisions would cause irreparable harm to our wildlife and public lands.”

In conference, some lawmakers took a “hard line” against the policy riders, and threatened to dismantle the entire bill, Sen. Jim Inhofe (R-Okla.), a ranking member of the Senate Armed Services Committee, told E&E News. “Since it happened in the big four [negotiators], it’s not for me to respond who it was, but there was such a hard-line objection to it that it could have brought down the bill,” he said. “And nothing’s worth that.”

In its nearly-final form, the bill even actively addresses climate change. As of Tuesday, it instructs the secretary of defense to consider “changing environmental conditions” in military “construction designs” and “modifications.” (This was typical language during the Obama administration but has since become censored on federal websites and reports.)

“The [Defense bill] carries on Congress’s long, proud tradition of bipartisanship when it comes to delivering on behalf of our military,” members of the House and Senate Armed Services Committees said in a joint statement Monday. “…As this legislation moves toward final passage and to the President’s desk, we are confident it will continue to represent how our government can and should function—and serve as a model of how we can work together to solve problems and defend our great nation.”

Even with Tuesday’s good news for environmentalists, the broader assault on the Endangered Species Act continues, with just the past few weeks seeing at least a dozen attacks on the act’s authority.

Read the latest draft of the defense spending bill here.