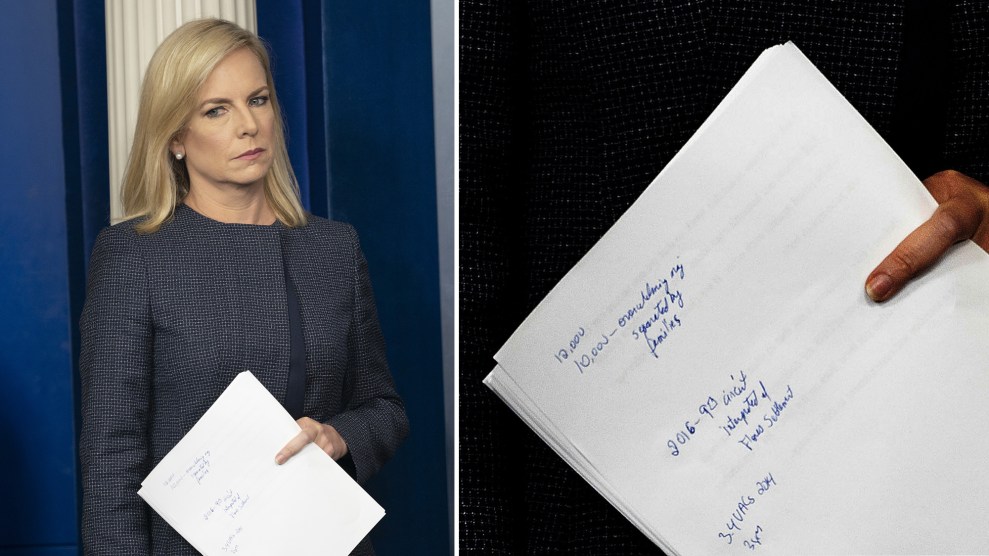 Monday’s White House press briefing was delayed three times as Homeland Security Secretary Kirstjen Nielsen flew in from New Orleans and prepared to defend a family separation policy she claims doesn’t exist. When, four hours after the briefing was originally scheduled, Nielsen took the podium, she was carrying a stack of notes.

Mother Jones found that her notes are easily legible when an image of Nielsen holding them is enlarged. It’s not the first time an official in President Donald Trump’s orbit gave away his or her intentions with visible notes. There was the time Kris Kobach, who would soon help lead the president’s controversial voting commission, entered a meeting with Trump carrying notes outlining his hardline immigration proposals. And there was the time Trump himself held a cue card reminding him to say “I hear you” as he listened to school shooting survivors in February.

Allow us to decode this photo of Nielsen and her telltale notes as she confronted reporters.

“12,000 / 10,000—overwhelming maj separated by families”: Nielsen hammered this point in the briefing, stating, “The vast majority, vast, vast majority of children…right now—10,000 of the 12,000—were sent here alone by their parents.” In others words, the Trump administration had taken “only” 2,000 kids from their parents. Trump administration officials told reporters on Tuesday morning that 2,342 children were separated from parents between May 5 and June 9.

“2016—9th circuit interpreted…Flores settlement”: The note is a reference to a 2016 court decision from the 9th Circuit Court of Appeals that largely upheld a lower-court ruling that requires children to be quickly released from family detention facilities. (The Flores settlement was a 1997 agreement to keep children out of immigration detention that the 2016 court ruling was based on.) The Trump administration has repeatedly and falsely claimed that the court decision—along with a George W. Bush-era law designed to prevent child trafficking—requires it to separate families. In a court filing, one of the few venues where the administration is required to tell the truth, the Justice Department acknowledged that it does not have to break apart families by criminally prosecuting parents.

“3.4 UACs 2014 3 yrs”: On Tuesday morning, the White House press office sent out a document on the alleged border crisis. One bullet point in the document stated, “Only 3.4 percent of UACs [unaccompanied alien children] encountered at the border in FY 2014 from countries other than Mexico had been removed or returned as of FY 2017.” There is currently a backlog of more than 700,000 cases in immigration court, so it often take years to resolve immigration cases. The Trump administration has pushed for doubling the number of judges so it can move through the backlog more quickly. But Trump has apparently not gotten the memo, saying on Tuesday, “I don’t want judges. I want border security.” (The Justice Department’s budget request to Congress asks for more judges.)

The middle finger: Probably not intentional, though who can say for sure?

CNN reported on Monday that Nielsen went through three rounds of briefings as part of her “extensive preparation”—first with homeland security officials, then in the office of her old boss and White House Chief of Staff John Kelly, and finally with White House press secretary Sarah Sanders and other members of the press team.

ProPublica leaked excruciating audio of detained children crying out for their parents more than an hour before Nielsen started the briefing. Reporters could be heard playing the audio in the briefing room as they waited for her and Sanders. But Nielsen and her team apparently did not take the time to listen to the recording; she told reporters she had not heard it. Instead, they scribbled these three factoids, two of which Nielsen didn’t mention at the briefing.