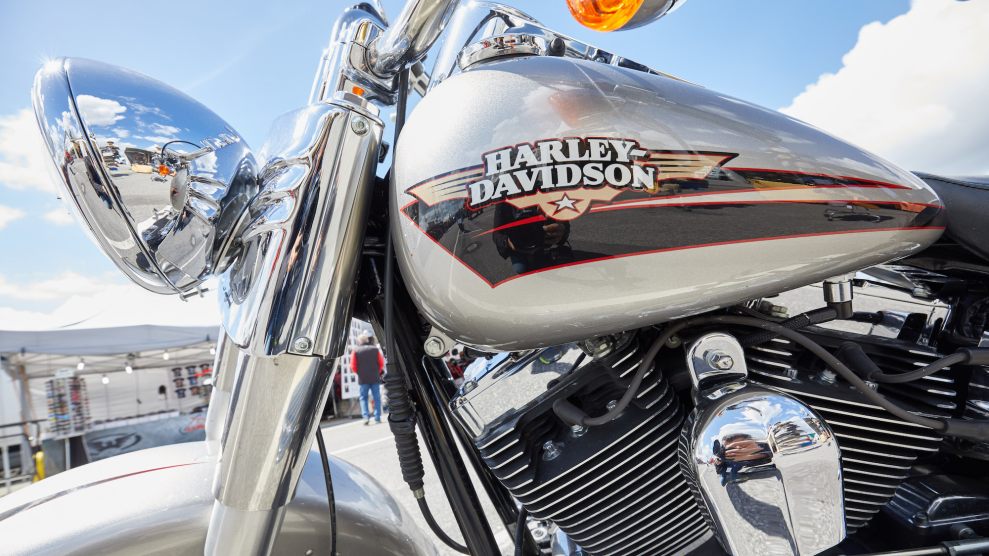 A Harley-Davidson bike in Hamburg, Germany.Georg Wendt/DPA via ZUMA Press

President Donald Trump took to Twitter on Tuesday morning to slam motorcycle manufacturer Harley-Davidson, which announced on Monday that it would move some of its manufacturing overseas to avoid retaliatory trade costs imposed by the European Union in response to the Trump administration’s new tariffs on European steel and aluminum.

The president said the move “will be the beginning of the end” for the company and threatened that “they will be taxed like never before!” Trump did not specify what the source of those increased taxes would be.

A Harley-Davidson should never be built in another country-never! Their employees and customers are already very angry at them. If they move, watch, it will be the beginning of the end – they surrendered, they quit! The Aura will be gone and they will be taxed like never before!

The motorcycle manufacturers’ decision comes in the midst of broader trade tensions with the EU. On Friday, the EU began levying tariffs on $3.2 billion worth of American goods, including motorcycles, bourbon, cigarettes, and peanut butter. Those costs had been imposed in response to the Trump Administration’s tariffs on European steel and aluminum, which President Trump had said was designed to protect the US industries from foreign producers who undercut their prices. Many experts, however, feared the move would incite a trade battle and inspire companies to move out of the US, just as Harley-Davidson has announced it plans to do.

Harley-Davidson’s announcement came by way of a Securities and Exchange Commission filing, which noted the tariffs would raise the cost of their products in the European market by about $100 million a year. In prepared remarks issued Monday, the Milwaukee-based manufacturer said that “increasing international production to alleviate the EU tariff burden is not the company’s preference, but represents the only sustainable option to make its motorcycles accessible to customers in the EU and maintain a viable business in Europe,” which is called a “critical market.”

The president’s Tuesday tweets build on criticisms he made Monday evening, when the motorcycle manufacturer first announced the move. He characterized them as being the first to “wave the White Flag” in the face of the EU’s retaliation.

During his Tuesday morning Twitter tirade, the president also defended his tariffs on European goods. He said the administration has been “getting other countries to reduce and eliminate tariffs and trade barriers that have been unfairly used for years against our farmers, workers and companies.” The tariffs imposed by the EU, which he says has “long taken advantage of the US in the form of Trade Barriers and Tariffs,” would “all even out” soon, and he demanded Harley-Davidson be patient as his administration exerted pressure on other countries to drop trade barriers against the US.

….We are getting other countries to reduce and eliminate tariffs and trade barriers that have been unfairly used for years against our farmers, workers and companies. We are opening up closed markets and expanding our footprint. They must play fair or they will pay tariffs!

….We are finishing our study of Tariffs on cars from the E.U. in that they have long taken advantage of the U.S. in the form of Trade Barriers and Tariffs. In the end it will all even out – and it won’t take very long!

The trade wars with the EU are only the most recent act by the Trump administration that has forced Harley-Davidson to shrink its footprint in the US. Shortly after taking office, the Trump administration pulled the US out of the Trans-Pacific Partnership, a 2016 agreement made among 12 North American and Asian countries that lowered barriers to trade. In early 2018, the motorcycle manufacturer said it would be forced to close a factory in Kansas City and downsize production at a facility in York, Pennsylvania, a move that cut roughly 260 jobs, due to weakening bike sales abroad. The president referred to this Tuesday morning:

Early this year Harley-Davidson said they would move much of their plant operations in Kansas City to Thailand. That was long before Tariffs were announced. Hence, they were just using Tariffs/Trade War as an excuse. Shows how unbalanced & unfair trade is, but we will fix it…..

He did not always feel this way. Indeed, the president held up Harley-Davidson as a model of American manufacturing, describing the 115-year old company as “a true American icon,” during a meeting at the White House in February 2017.

“Thank you, Harley-Davidson, for building things in America,” Trump had said then. “I think you’re going to even expand. I know your business is now doing very well and there’s a lot of spirit right now in the country that you weren’t having so much in the last number of months.”

Great meeting with @harleydavidson executives from Milwaukee, Wisconsin at the @WhiteHouse. pic.twitter.com/7Spcmh6guM