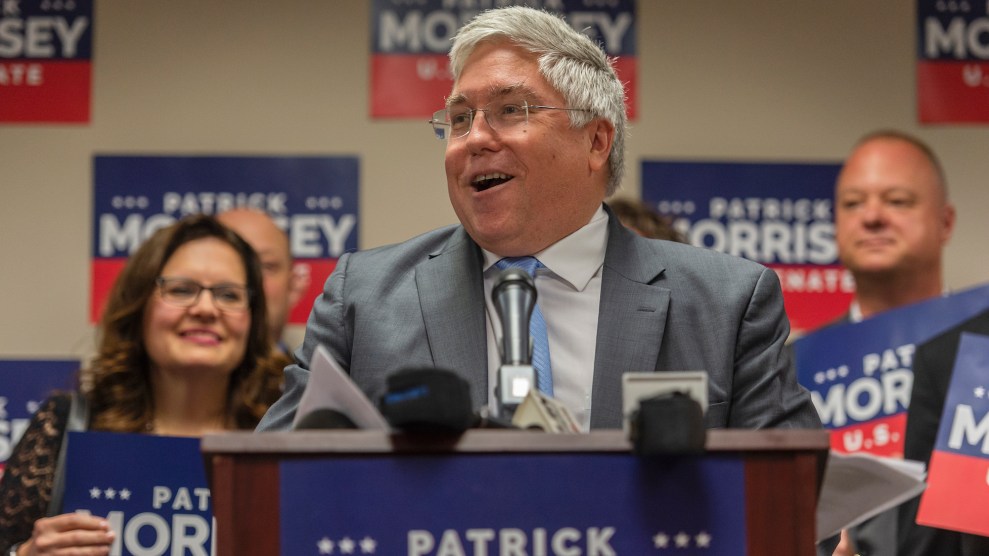 On Monday, retiring Republican Sen. Bob Corker (R) took a stand against the Trump administration policy that separates children from parents who are prosecuted for entering the United States without authorization. “We can all agree that innocent children should be protected and not used for deterrence,” the Republican senator said in a statement.

But Tennessee Rep. Marsha Blackburn, the front runner in the Republican primary to replace Corker, did not share his views. Instead, Blackburn expressed sorrow for the separated families but blamed “liberals” who “would not pay to enforce our immigration laws or build appropriate facilities for asylum seekers.” She did not say whether she disagreed with the Trump administration’s policy.

President Trump signed an executive order on Wednesday that ends the separation of families at the border, something Senate Republicans had begun advocating for earlier in the week: On Tuesday, Senate Majority Leader Mitch McConnell (R-Ky.) said all Senate Republicans—including the six who are up for reelection—endorsed a bill that would keep parents and children together in detention as courts consider their cases.

But several Republicans running for office have taken a different tack: They’ve remained silent on the family separation policy, or have voiced support of it.

Some candidates like Blackburn have toed a careful line. Leah Vukmir, one of the Republicans aiming to unseat Sen. Tammy Baldwin (D-Wis.) similarly agreed that “of course families shouldn’t be separated,” but declined to say whether the family separation policy should be changed. Vukmir capitalized on the opportunity to discuss a need for immigration reform, telling a Wisconsin news channel that “people are taking advantage of our generosity in this country” and America is “a nation of laws and we have to stand up and uphold those laws.”

But other candidates have been vocal in their support. Rep. Lou Barletta (R-Pa.), an immigration hardliner who faces an uphill battle in his race against incumbent Sen. Bob Casey (D-Pa.), defended the policy, claiming the separation was no less harsh than what happens to American citizens who enter the criminal justice system. “Should you or I commit a criminal act this afternoon after we’re done with this interview, we’re going to be separated from our families,” he explained to a Pittsburgh reporter. “I don’t think we should have separate laws for people who come in the country illegally and other laws for American citizens.” Barletta also said the policy served as a strong deterrent for would-be undocumented immigrants. “If people knew when they came here what would happen,” he said, “we would not have this situation.”

Corey Stewart, who last week became the GOP nominee to face off against Virginia Sen. Tim Kaine (D), has long been known for his fiery attacks on undocumented immigrants. On the subject of family separation, he told a Virginia news outlet that he thinks “the president’s policy is correct,” and took to Twitter to wonder if “the kids are #LeftistTerrorist props?” Stewart also told MSNBC that separating children was “unavoidable policy” and in the “best interest of the United States.”

West Virginia attorney general and GOP senate candidate Patrick Morrisey, meanwhile, slammed competitor Sen. Joe Manchin (D-W.V.) for co-sponsoring a bill that would outlaw family separation except in very specific cases. Morrissey said the bill gave “special privileges” to, among others, “child traffickers” and  would “encourage the use of vulnerable children as shields to illegally cross the border in greater numbers.” (It’s a line the president used lately himself.)

Not all GOP candidates share this view. Mitt Romney, the 2012 Republican presidential nominee running to replace Sen. Orrin Hatch (R-Utah) has called himself “more of a hawk on immigration” than the president, but Romney told voters in Utah on Monday that the images of from the children detention centers had been “pretty disturbing,” and said he thinks “we should go back to the setting where we’re not ripping children away from their parents.” Florida Gov. Rick Scott, who’s aiming to unseat Sen. Bill Nelson (D-Fla.), took a similar stance, condemning the practice in a letter to Health and Human Services Secretary Alex Azar, who’s agency is responsible for the children’s detention. “This practice needs to stop now,” he wrote.

Even as candidates stand divided today, President Trump’s ever-evolving position on the matter will likely bear significant influence on candidates’ rhetoric. So far in 2018 primaries, Republican candidates have been rewarded for out-Trumping one another, especially those running in states where Trump won in 2016. Much of that action has hinged on candidates’ stances on immigration, which has emerged as a wedge issue across the GOP primary races. But the president’s inconsistency on the subject may be a tricky thing for candidates to follow: though Trump told reporters Wednesday “we’re looking to keep families together, it’s very important,” the policy, of course, was of his own creation.