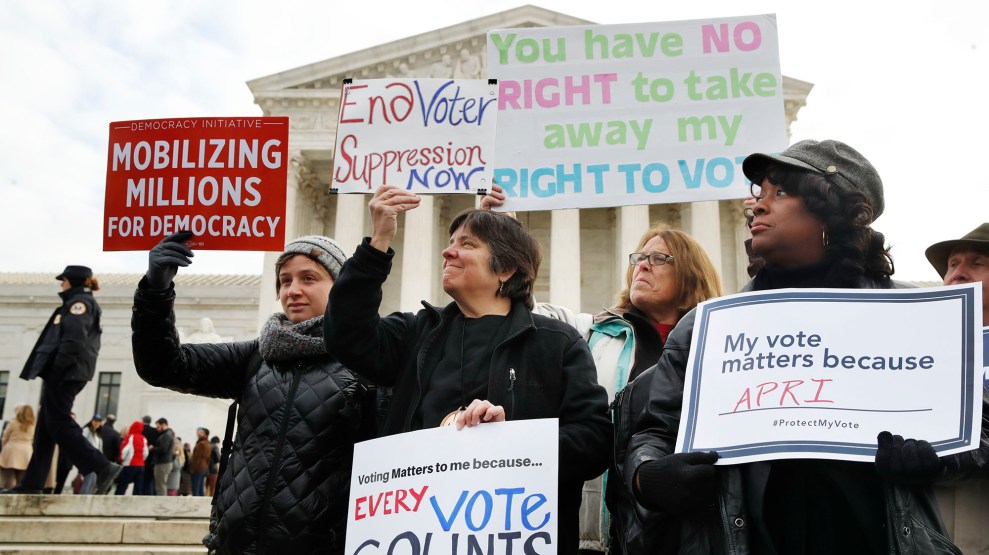 Protestors gathered outside the Supreme Court in January to show opposition to Ohio's policy for purging voter rolls.Jacquelyn Martin/AP

The Supreme Court dealt a big blow to voting rights Monday, in a decision that is likely to green-light aggressive purging of voter rolls across the country.

The case originated in Ohio, where the Republican secretary of state manages an aggressive program of removing infrequent voters from the rolls. The effect of this effort is that thousands of eligible voters are removed from the rolls, and strong evidence suggests that the policy causes minorities in heavily Democratic areas to be purged disproportionately. People who are removed are not informed, so they’re often unable to re-register before an election takes place, and lose their ability to vote.

The case hinged on interpretation of the National Voter Registration Act (NVRA), a 1993 civil rights law intended to increase voter registration and participation. But in recent years, some conservative activists began using certain provisions of the law to force states to more aggressively purge their rolls. Those provisions govern what’s known as “list maintenance,” and their stated purpose is to remove people who have moved or passed away. But election officials instead sometimes use list maintenance to remove eligible voters—particularly poor ones and people of color—because they haven’t voted frequently enough.

The state of Ohio sends a notice every year to voters who have not cast a ballot in the previous two-year cycle. Voters are asked to respond to the notice, update their registration online, or vote sometime in the next four years. If they do none of these things, they are removed from the rolls, ostensibly in an effort to prevent voter fraud by removing ineligible names. The issue before the court was whether this process violates the NVRA’s prohibition on removing voters because of their failure to cast a ballot. The conservative majority, in an opinion by Justice Samuel Alito, found it did not, because it doesn’t rely solely on a person’s failure to vote, and because the provision does allow states to consider people’s voting history in their efforts to locate ineligible voters. But the majority did not grapple with the effects of the policy.

The result of the policy is that voting becomes harder for thousands of people, particularly minority and poor citizens. Reuters analyzed Ohio’s three largest counties and found that people in Democratic-leaning neighborhoods were removed at twice the rate of people in Republican areas, and that “neighborhoods that have a high proportion of poor, African-American residents are hit hardest.”

In a fiery dissent, Justice Sonia Sotomayor accused the court of sanctioning efforts “to disenfranchise low-income and minority voters.”

The court’s 5-4 decision is likely to resurrect an era that the NVRA was meant to end. The practice of purging voters dates back more than 100 years. Just as today, it was justified as a necessary tool to thwart fraud and maintain the integrity of elections. But in practice, it was often used to suppress the votes of those who might not support the party in power. The result of the aggressive purges was that Americans participated in elections at a far lower rate than citizens of other Western democracies. Purges were often more aggressive in Southern states, particularly after the civil rights movement removed other barriers, such as poll taxes, for African Americans to cast ballots. The NVRA was meant to solve this problem, and it specifically prohibited states from removing people from the rolls “by reason of the person’s failure to vote.”

In a fiery dissent, Justice Sonia Sotomayor accused her conservative colleagues of ignoring the ramifications of their decision and the history of discrimination behind voter purges like Ohio’s. “Congress enacted the NVRA against the backdrop of substantial efforts by States to disenfranchise low-income and minority voters,” she wrote. In allowing Ohio’s program to continue, the court is “sanctioning the very purging that Congress expressly sought to protect against.” Until the NVRA, states used annual registration requirements and purges that, Sotomayor noted, kept turnout low among African Americans and immigrants. And Ohio’s program, she wrote, likewise had a disproportionate effect on minority and poor voters, as well as disabled voters and veterans.

In fall 2016, the Sixth Circuit Court of Appeals found that Ohio’s policy violated this NVRA provision. The ruling forced Ohio to reinstate 7,500 voters it had purged in time for the 2016 elections. But the Supreme Court’s majority opinion overrules the lower court’s decision.

The Justice Department opposed Ohio’s practice during the Obama administration. But it reversed its stance under Attorney General Jeff Sessions—one of many voting rights cases in which the Trump administration has come down in favor of making it harder to vote.

In recent years, Republican activists have sought to weaken other core provisions of the NVRA. Kris Kobach, Kansas’ Republican secretary of state and the public face of the conservative movement to limit access to the polls, has drafted legislation to amend the NVRA so that he and other election officials can require people to provide proof of citizenship in order to register—a move that would once again have an outsized impact on low-income and minority citizens.