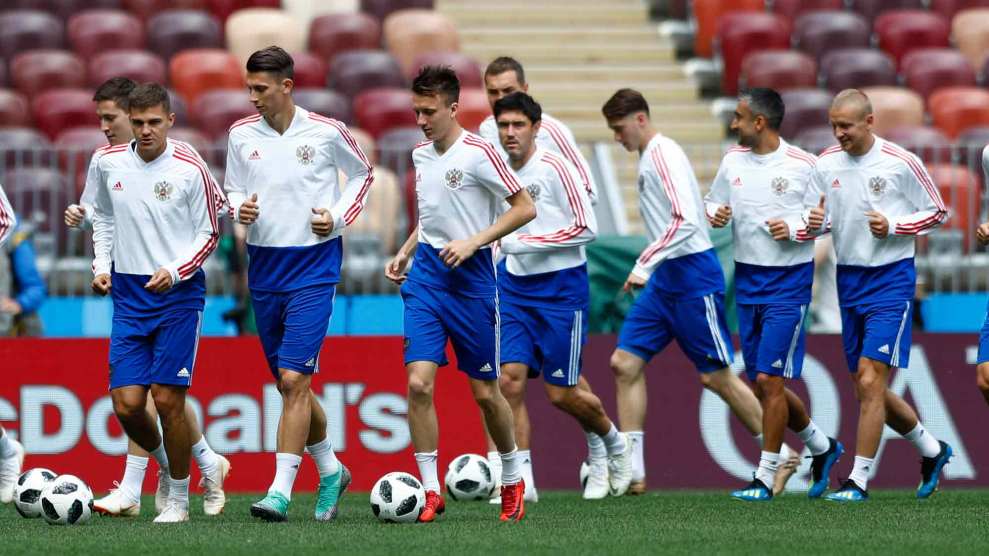 As host of the 2018 World Cup, Russia has the privilege of playing in the first match of the month-long competition. And as Team Russia takes the field on Thursday, soccer fans will see a national team that looks almost nothing like tournament favorites Brazil, France, Germany, Spain, or Belgium.

Russia’s team is almost entirely made up of white players who make their living playing for the country’s domestic league. The World Cup teams expected to get close to the final game are not only ethnically diverse, but are stocked with players who ply their trade outside their home countries, in the world’s most watched, most-competitive and highest-paying leagues: the English Premier League, Spain’s La Liga, and Germany’s Bundesliga.

“Banana, banana-mama, why the fuck our national team needs a monkey?”

History and economics go a long way toward explaining why the Sbornaya, as Russians call their team, stands apart in these ways from most major footballing nations, but there’s also the well-deserved reputation of Russian football and its fans for racism and xenophobia, not to mention the nation’s ultra-nationalist political environment.

While the world’s top soccer clubs draw on footballers from diverse nations, players may only play for a country’s official national team if they are citizens of that country. And once a footballer takes the field for a national team in an official competition, it is virtually impossible for them to switch to another team. International football is filled with stories of players who are granted citizenship in a country based on a parent or grandparent having been born there, or whose parent or ancestors immigrated to a new country, or who as professional athletes moved somewhere and played just long enough to gain citizenship. But you won’t find many of them in Russia.

“Whereas lots of European teams like France or England have lots of black players, Russia never had an overseas empire,” says Richard Arnold, a professor of political science at Ohio’s Muskingum University who has studied race in Russian sports. The French and British national teams include many citizens of African heritage, typically tracing back to countries once colonized by Europeans.

Russia’s isolation was heightened during the Cold War, when the Soviet Union placed strict limits on emigration. That meant fewer Russians lived abroad, where they might have learned soccer and come home to play for the Sbornaya, or produced future generations of multi-ethnic children or grandchildren with soccer talent.

Russia’s 16-team Premier League has long required a substantial portion of every squad to be eligible for the Russian national team. In 2016, this protectionist rule was strengthened at the urging of Victor Multko, then the country’s sports minister and the head of the Russian Football Union, the sport’s governing body.* (He’s now a deputy prime minister.) Today, Premier League teams must field six Russians among their 11 starters. “The clubs compete very hard to get the best Russian players because they have to play them. That means the players get paid much more than they are worth,” explains Toke Møller Theilade, editor of the website Russian Football News.

Indeed, many Russian players’ multimillion-dollar salaries—shelled out by teams often owned by government entities, oligarchs, state-backed enterprises, or petro-conglomerates and -moguls—are far larger than what they could command abroad, even if a foreign team decided a Russian player was worth signing. “The natural thing would be for a player to move to a small club in Spain or Italy, and play and develop there,” Theilade says, but even mediocre Russian pros are guaranteed big money and lots of playing time if they stay home instead.

The Russian Premier League’s quota system was envisioned as a way to ensure that a pool of well-prepared homegrown players would be available to play in the World Cup. But many followers of Russian soccer believe the rule backfired by luring the country’s top players away from better leagues where they would train and play against stronger opposition, and making them complacent by guaranteeing them a starting spot. (Some soccer analysts blame the US team’s failure to qualify for the World Cup in part on a similar dynamic, wherein inflated Major League Soccer salaries enticed American stars away from stronger European teams.) In the end, Russia’s World Cup squad has only two players who compete abroad—one is a backup goalie.

“We’re not racist, but we see the absence of black players at Zenit as an important tradition.”

A segment of fans haven’t been shy about saying their national team should be made up of ethnic Russians. Guilhereme, a Brazilian-born keeper who has played in Russia’s Premier League for many years, made his national team debut in March 2016, shortly after acquiring his citizenship. During a high stakes match the following year, thousands of fans from a rival Russian Premier League team chanted at him: “Banana, banana-mama, why the fuck our national team needs a monkey?” (Guilhereme has no recognizable African heritage.) Similar feelings have arisen within the Russian league. Back in 2012, Zenit St. Petersburg’s largest fan group demanded that their team only hire Slavic players. “We’re not racist,” the fans wrote in a manifesto to club officials, “but we see the absence of black players at Zenit as an important tradition. It would allow Zenit to maintain the national identity of the club.”

Russia did take some initial steps to stock its team with foreign-born players, but the move proved controversial among fans. “I heard a lot of people say, ‘It’s not a Russian team anymore,'” Theilade told me. “There has been a lot of unhappiness with these people being members of the national team.”

While a handful of foreign players acquired Russian passports over the last several years—some were given citizenship by a special decree from President Vladimir Putin—in the end, only Mário Figueira Fernandes, a white, Brazilian-born right back who speaks no Russian, made the final World Cup squad. “He’s probably the best Brazilian right back at the tournament, now that Dani Alves is injured” says Manuel Veth, a German-born fan of the Russian squad who runs Futbolgrad, a website covering soccer in Eastern Europe.

The near-absence of naturalized foreigners on the Russian national team is notable, says Theilade, the Russian Football News editor, especially given the lengths the Russian government was willing to go to grant some of them citizenship: “That is a bit strange. A lot of work went into this, and it embarrassed Russian football when they did it.”

Another player, Roman Neustadter, who has ethnic German and Russian heritage but was born in Ukraine, received his Russian passport on the eve of the country’s participation in the 2016 European championships—in a Berlin embassy ceremony captured by RT, the Kremlin-funded news and propaganda outlet. (Neustadter made his career in Germany and now starts for Turkish powerhouse Fenerbahçe.) Neustadter’s exclusion from Russia’s 2018 national squad is remarkable, Theilade says: “He’s by far the best central defender in the Russian system. But he isn’t on the 2018 team. I think this is a political influence.” Neustadter has been relatively outspoken and willing to publicly broach topics that are controversial in Russia, including LGBT rights. “He has a European mindset,” Theilade says. “They are a bit afraid of what he can say.”

Since 2014, the SOVA Center for Information and Analysis, a Moscow research organization that tracks nationalism and xenophobia, has partnered with Fare, an international organization pushing for diversity in soccer, to produce a series of reports detailing hundreds of troubling incidents in Russian soccer. The list includes the display of fascist symbols, monkey chants, beatings of minorities, and even the incitement of an anti-migrant pogrom. Just last month Russia’s football federation was fined by FIFA, the sport’s global governing body, after national team fans directed racist insults at black players on the French national team. There are deep links between Russian fan organizations and ultra-nationalists. In 2016 Alexander Shprygin, then head of a state-endorsed fan group, the All-Russian Supporters Union, was one of dozens of Sbornaya fans deported from France after taking part in hooligan riots during the 2016 European championships. Shprygin, who SOVA reports has been photographed honoring Adolf Hitler, using a Nazi SS logo, and giving fascist salutes, is banned from attending the 2018 World Cup matches.

Many Russian football supporters’ domestic attacks have been directed at fans from the southern Caucasus states, who despite being mostly fair-skinned are often called chernye, an epithet meaning black. This discrimination hasn’t stopped some of the region’s players from being selected for the national team, although Theilade warns that fan groups probably “wouldn’t be happy if they saw too many players from the Caucuses” suit up for the national team.

But according to Futbolgrad‘s Veth, fans are used to cheering Sbornaya players from the Caucasus, who featured prominently on Soviet national teams. He points to a small number of players with roots in the Caucasus that were included in Russia’s 2018 team—including goalkeeper Vlad Gabulov and midfielder Alan Dzagoev, both Ossetian, and winger Aleksandr Samedov, who has an Azeri father—as evidence that the team is more diverse than it might appear to western eyes who focus on skin color and Russian-sounding last names. (Another World Cup selection, Daler Kuzyayev, has Tatar roots.) “We don’t see it,” Veth says. “You have to go digging for it.”

Thursday’s kickoff matchup of Saudi Arabia vs Russia features two of the weakest teams in the 32-nation competition, and likely represents Russia’s best chance for a win. When Russia controversially won hosting rights, Putin said the country would field a team that would make Russians proud and be capable of winning the tournament. “They have aspirations to use the national team to improve patriotism, which all nations do,” Arnold says. “However, any attempt to use the team like a Russian Olympic team, to rally the country, is undermined by how utterly poor the team is.”

As world soccer’s biggest event starts, Russia, whose 70th place FIFA ranking is the tournament’s worst, hasn’t won any of its last seven matches. Indeed, most analysts predict the Sbornaya will be defeated in the first group stage, delivering an embarrassing rebuke of the nation’s insular approach to what has long been a very global game.

*This sentence has been revised to clarify the rule’s intent.