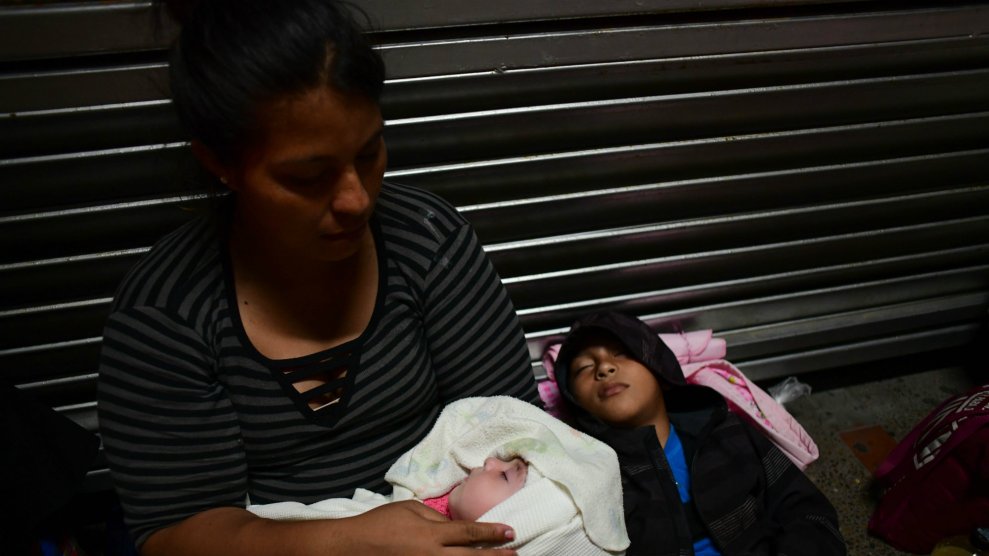 This story was originally published by Reveal and appears here as part of the Climate Desk collaboration.

As thousands of migrant children have been taken from their parents and sent to facilities across the country, questions are growing about the medical care they are receiving—or, as health experts fear, not receiving.

Since President Donald Trump’s “zero tolerance” policy for unlawful entry into the country went into effect in April, more than 2,300 children, including infants, have been forcibly separated from their parents.

Although Trump last week ordered families to now be detained together, federal officials from several agencies have refused to give any information on the children’s welfare or what medical care they’re receiving. In addition, more than 10,000 other children who crossed the border unaccompanied were being held at detention centers as of last month.

New York City Mayor Bill de Blasio said that 243 migrant children separated from their parents at the border were sent to the Cayuga Centers foster care facility in East Harlem. When de Blasio visited the facility last week, staff told him that some of the children had illnesses they likely picked up at border facilities.

“Officials at one of the foster care providers told us that a number of children arrived with lice, bedbugs, chickenpox and other diseases,” said Danielle De Souza, press officer for the New York City Health Department. “The city only has anecdotal information at this point.”

De Souza said de Blasio asked the U.S. Department of Health and Human Services for information about the children, but has not heard back.

Dr. Peter Hotez, dean of the National School of Tropical Medicine and a Baylor College of Medicine professor of pediatrics and molecular virology and microbiology, said he would expect the same types and abundance of illnesses in the detention centers as surfaced in evacuation shelters after hurricanes or other disasters, where infections spread quickly.

Dr. Julie Linton, co-chair of the American Academy of Pediatrics Immigrant Health Special Interest Group, said “access to care is profoundly limited” at the detention facilities on the border.

In 2016, Linton traveled to Texas to visit three of these facilities, including McAllen, the largest processing center, known as “Ursula.” She said the conditions and access to health care vary by facility. Some processing centers screen children for obvious diseases, such as lice, chickenpox and scabies. But none of them take medical histories or conduct physical exams.

In the past, delayed access to basic care for viral infections at immigrant facilities has led to pneumonia and hospitalization of children, said Linton, a pediatrician in Winston-Salem, North Carolina.

Many of the children are weak and malnourished after traveling for several weeks with limited access to food and safe water, said Dr. Omolara Thomas Uwemedimo, director of the global health training program at Cohen Children’s Medical Center of New York.

The cramped conditions at detention facilities, combined with the stress of separation from their parents, could further weaken the children’s immune systems, making them more susceptible to illness and infection, Uwemedimo and other doctors said.

“Anytime you throw children together who are living under conditions of stress and crowding, you worry about disease outbreak,” Hotez said.

Temperatures hovered around the mid- to upper-90s for the past few weeks in the U.S. Customs Border Protection detention center in McAllen, Texas. But there’s an unshakeable chill inside the facility. As one 10-year-old girl told an MSNBC reporter, detained children call these places la hielera – the freezer.

Children at border detention facilities are supposed to receive screening and treatment for easily diagnosed health issues, such as lice and chickenpox, before they are sent to one of the dozens of shelters in 18 states for “unaccompanied minors” operated by the Office of Refugee Resettlement, which is under the Department of Health and Human Services.

“Anytime you throw children together who are living under conditions of stress and crowding, you worry about disease outbreak.”

Federal officials did not respond to repeated requests for comment about whether those protocols are being followed or what measures they’re taking to stem the spread of disease.

Linton said the quality of health care at federally contracted shelters is generally better than what’s available at the border detention centers. She said some have good access to doctors and even specialists.

“I have treated some of these kids myself,” she said.

But, she added, “we have put many of these shelters beyond capacity by separating children from parents. This has led to an unexpected increase in numbers that puts pressure on these facilities, and having to meet these additional needs is challenging.”

On Wednesday, Trump issued an executive order to end forced family separation. But the order maintained the zero tolerance policy and called for families to be detained together. Civil rights groups say the order violates a decades-old court settlement that prohibits children from being held in detention longer than 20 days. At least 2,000 children remain separated from their parents with no clear plan to reunite the families.

Doctors for America, an advocacy group of physicians and medical students, plans to mobilize its membership to demand that federal officials allow them to meet with the children in the detention centers, said its executive director, Jim Duffett.

So far, only Dr. Colleen Kraft, the president of the American Academy of Pediatrics, has been granted access to a confined area of one center, back in April. She was not allowed to identify the location but said it was in the Rio Grande Valley. The facility was clean and the kids had food and toys, but detaining children without their parents “amounts to child abuse,” Kraft told CNN.

Tom McPheron, the academy’s press officer, said Kraft will attempt to tour Texas detention facilities again later this week, but is not sure whether she will be granted access.

The pediatricians’ academy issued a statement condemning Trump’s plan to detain families together.

“Continuing to maintain the ‘zero tolerance’ policy will put more children in detention facilities, an environment the AAP states is no place for a child, even if they are accompanied by their families,” the group said. “Studies of detained immigrants have shown that children and parents may suffer negative physical and emotional symptoms from detention, including anxiety, depression and posttraumatic stress disorder. Conditions in U.S. detention facilities, which include forcing children to sleep on cement floors, open toilets, constant light exposure, insufficient food and water, no bathing facilities and extremely cold temperatures, are traumatizing for children. No child should ever have to endure these conditions.”

As a candidate in 2015, Trump blamed Mexican immigrants for bringing “tremendous infectious disease” across the border.

Hotez said that despite high poverty levels, Mexico and Central America have very high child vaccination rates: between 88 and 98 percent. Children there are routinely vaccinated for measles, diphtheria, whooping cough and other common childhood diseases. In the U.S., vaccination rates for these diseases range from 85 to 95 percent.

“The idea that children are going to bring in diseases goes against the science,” Hotez said. “In Texas, we’ve had such a decline in vaccine coverage due to an aggressive anti-vaccine movement that it’s the children on the US side of the border that pose the risk.”

“In Texas, we’ve had such a decline in vaccine coverage due to an aggressive anti-vaccine movement that it’s the children on the US side of the border that pose the risk.”

In a paper published this month, Hotez and his colleagues identified several U.S. cities that could be vulnerable to infectious disease outbreaks due to large numbers of unvaccinated U.S. children. Several of these cities, including Houston, Seattle, Portland and Detroit, have shelters for migrant children who enter the country on their own.

With no indication when or if breastfeeding children will be reunited with their mothers, the Academy of Breastfeeding Medicine, an international physicians’ organization, also issued a statement condemning Trump’s policy.

“Infants who are not breastfed face increased risks of ear infections, gastroenteritis and pneumonia,” the group said. “Separation of any infant from their mother also has untold emotional harms on those children. These risks are magnified if they are housed in facilities where proper preparation of formula or washing bottles and teats is not available.”

But it’s the trauma of separation that worries health experts the most.

On Saturday, de Blasio sent Health and Human Services Secretary Alex Azar an urgent request to explain, among other things, how the federal government plans to treat the children who need immediate medical care for the “profound emotional trauma” he witnessed. He’s still waiting for a response.

“As pediatricians, we recommend screening children for several infectious diseases as well as chronic conditions,” said Linton. “But I can tell you that the most prevalent issue I see by far, clinically, is trauma.”