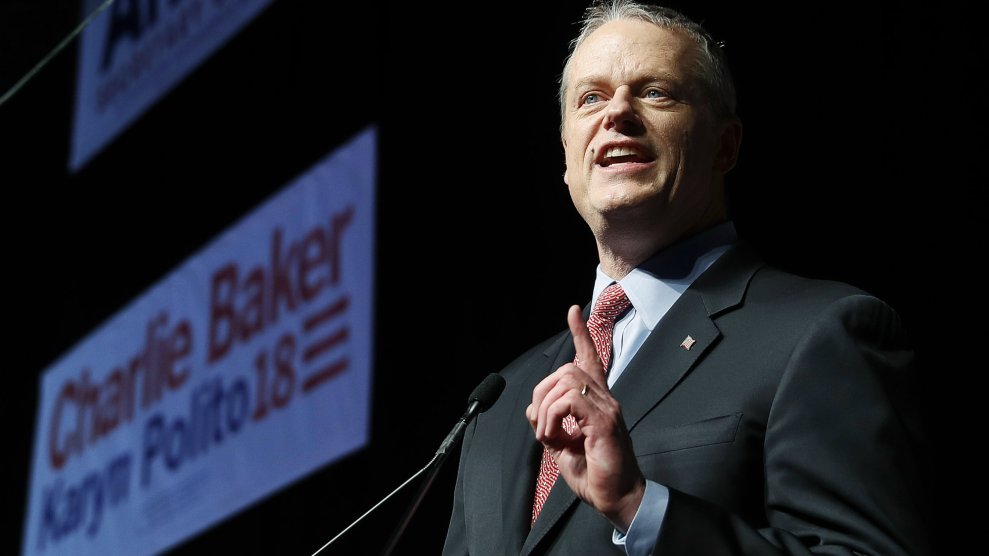 On April 12, Sean Gannon, a Yarmouth, Massachusetts, police officer went to serve Thomas Latanowich with a warrant for his arrest for a parole violation. While attempting to enter the room the suspect was in, Gannon was shot in the head and almost immediately died. The next day, Latanowich, who has a lengthy criminal rap sheet, was arrested and pleaded not guilty to murder.

While Gannon’s family, friends, and fellow officers mourned his death, Republican Gov. Charlie Baker, seized the opportunity to renew calls for the death penalty for people who kill cops.

“I just can’t think of anybody else who—literally every single day—puts themselves in a position where they’re vulnerable to this sort of thing,” Baker said in May about Gannon’s death. “They deal with people who in many cases don’t care, and that bothers me.”

As a popular governor in a liberal state, where executions have been banned since 1984, his position might seem to be unusual. But it’s not. “I am not surprised to see Charlie Baker to go after the death penalty for cop killers,” explains Mary Anne Marsh, a Democratic political strategist. “Certain Republicans may forgive him on other matters if he pursues the death penalty.”

Gov. Baker has enjoyed astronomical favorability ratings. In January, polling done by WBUR, a Boston radio station, found that 74 percent of voters approve of the job he’s doing. This is especially significant given that Massachusetts is considered to be a liberal stronghold, even though in the last 27 years, there has been only one Democratic governor—Deval Patrick who served two terms from 2007 to 2015.

Nonetheless, Donald Trump earned 33 percent of the Massachusetts’ vote in the 2016 election, so despite his personal popularity, Baker’s reelection campaign must maintain traditional Republican support. With this support of the death penalty, Baker, who has positioned himself as a social liberal—he supports gay rights and is pro-choice—offers conservative voters some red meat. “This is a way to appease the flank of the Republican party who would maybe skip the governor’s race,” Marsh says.

“This is a way to appease the flank of the Republican party who would maybe skip the governor’s race.”

Right now, Baker faces no real challenge in the primary, which will be held in September. Early polling shows the governor beating Democrat Jay Gonzalez by a landslide. As a moderate Republican governor in a blue state, Baker has had to carefully toe the line in dealing with President Trump. After Trump referred to Haiti and African countries as “shitholes” in January,  Baker said the president should apologize. However, on the subject of sanctuary cities—localities that limit cooperation with federal immigration officers and turn over undocumented immigrants—which are widely criticized by the Trump administration, Baker punted, saying it was a decision best left to local leaders. There are several such cities in Massachusetts, including Boston, Amherst, and Cambridge.

But his call for death for people who kill police officers is straight from the Trump playbook. “The Trump administration has a policy and it’s very clear: We will protect those who protect us.” Trump said at the National Peace Officers’ Memorial Service last month. He added, “we believe criminals who kill our police should get the death penalty—bring it forth.”

Baker agreed. “It’s so hard for me to think of [jobs] where people, literally every day, potentially walk into a life-threatening situation where someone can just take them out in what would seem to be the most routine circumstance of that particular job,” Baker said during a radio interview on a local Boston station in May. “For that reason and that reason only, I believe that for people who take these people out, they deserve to be held to a very high standard, and for me, that standard would be death.”

His plan would reverse decades of existing policy. The last execution in Massachusetts took place in 1947, when two men were electrocuted for the murder of Robert William. In 1972, the US Supreme Court ruled in Furman v. Georgia that the death penalty was unconstitutional, but four years later the high court reversed itself, ruling in Gregg v. Georgia that capital punishment was constitutionally sound. In 1982, Massachusetts voters voted to reinstate the death penalty, but before anyone could be executed, a state court ruled that the new capital punishment law was unconstitutional just two years later.

Today, Marsh says, the overwhelmingly blue Massachusetts legislature “would never let him bring back the death penalty, but the vote would be closer than people think.” Death penalty support runs high in communities with police officers and Republican lawmakers.

“Massachusetts has a reputation for being soft on crime and unfortunately that hurts our public safety,” said Republican state Rep. Shaunna O’Connell shortly after Officer Gannon was killed. “We need to send a message to criminals that ‘you kill law enforcement officers you are going to get the death penalty.'”

In raising this as an issue, Baker has awakened the call for capital punishment for cop killers among others. O’Connell says she would support legislation that reinstates capital punishment. Boston Police Commissioner William Evans weighed in last month, telling Boston Herald Radio that while he has “mixed emotions” and isn’t a “big supporter” of the death penalty in general, “we have to protect our cops and have it.” There is no evidence that the death penalty deters crime, however, and states without capital punishment have lower murder rates.

Support for the death penalty nationwide remains low and Massachusetts is no exception. A 2015 Boston Globe poll found that only 30 percent of the state’s residents supported capital punishment. Even in the highly emotional case of Dzhokhar Tsarnaev, one of the Boston Marathon bombers, only 18 percent of those surveyed said he deserved to be put to death.

But even with widespread disapproval of the death penalty, Marsh has a simple explanation for Baker’s calls to bring executions back to the state: “This is one of several tactics to keep the 33 percent of Trump voters happy.”