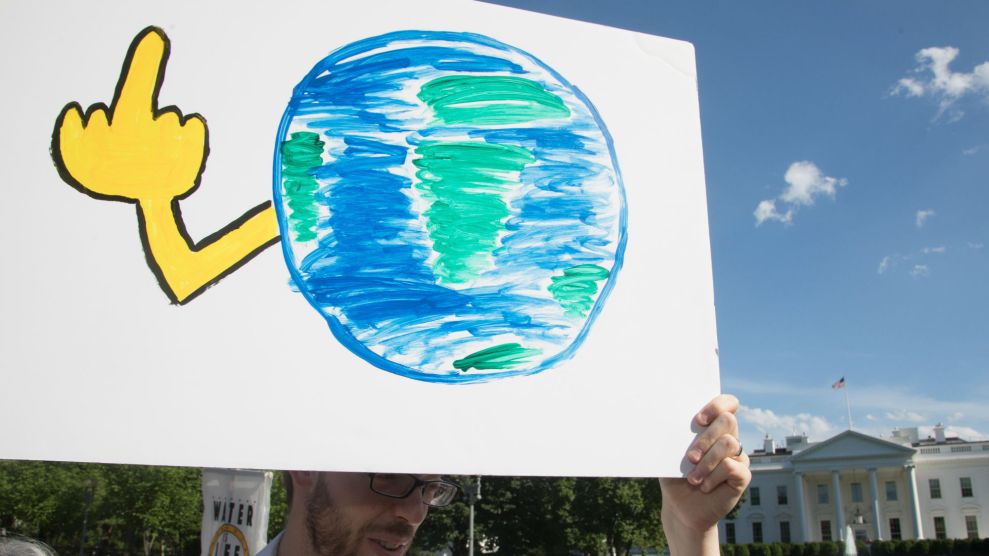 On Monday, a San Francisco federal judge ruled in favor of Big Oil, throwing out a prominent lawsuit brought by two California cities, Oakland and San Francisco, over the fossil fuel industry’s responsibility in dealing with climate change. It was a landmark case, prompting cities across the country to follow suit in an effort to protect their citizens from the growing threat of global warming.

As Mother Jones’ Amy Thomson wrote in October, the cities hoped to force the companies to pay for seawalls and other municipal projects necessary to combat the effects of a warming planet, which the companies had a hand in causing. In essence, the cities sought damages from climate change, which they claimed was a form of public nuisance.

Even though the plaintiffs lost, it wasn’t a total missed opportunity for environmentalists. In his ruling, Judge William Alsup didn’t dispute the science of climate change and in fact the oil companies—including BP, Chevron, Exxon Mobil, Shell, and ConocoPhillips—don’t either. The judge even held a first-time “climate tutorial” on the state of climate research, which I attended back in March. “Our litigation forced a public court proceeding on climate science, and now these companies can no longer deny it is real and valid,” a spokesperson for the San Francisco city attorney told the New York Times.

Judge Alsup’s reason for dismissing the case, he said, is rather that the courts were not the proper venue to address the cities’ allegations, writing in his decision, “The court will stay its hand in favor of solutions by the legislative and executive branches.”

Alsup points out in his decision that the Industrial Revolution and modernity as we know it would not have been possible without fossil fuels: “Without those fuels, virtually all of our monumental progress would have been impossible. All of us have benefitted. Having reaped the benefit of that historic progress, would it really be fair to now ignore our own responsibility in the use of fossil fuels and place the blame for global warming on those who supplied what we demanded?”

Despite peers in other cities closely watching the outcome of the case, it actually may have little to no effect on the several, similar ongoing lawsuits across the country—in New York, Colorado, and in California’s San Mateo and Marin counties, and the City of Imperial Beach, for example—aimed at holding Big Oil responsible for climate change, experts say.

“This decision is not binding on any other court,” Michael Burger, executive director of the Sabin Center for Climate Change Law at Columbia Law School, tells Mother Jones. “It may be that individual judges hearing cases are influenced by it, but there’s no way to know whether that’s going to happen or not.”

In New York, for example, US District Judge John Keenan is still considering whether a lawsuit brought against fossil fuel companies should fall under jurisdiction of the Clean Air Act, rather than law developed by the federal courts. “It’s actually possible the New York case will be dismissed for a different reason,” Pat Parenteau, a professor of law at Vermont Law School, tells Mother Jones.

The other issue, Burger says, is each of the cases bring separate complaints. “Public nuisance is just one of the claims that has been made against the fossil fuel companies. There have also been trespass claims, private nuisance claims, failure to warn claims, and a number of other sorts of claims,” he says. “Those are not decided by this decision at all.”

Both Parenteau and Burger expect San Francisco and Oakland to appeal Alsup’s decision, prompting consideration from the 9th Circuit Court of Appeals, and a move to possibly combine the lawsuit with the similar pending California cases filed under its jurisdiction, all tied to the state’s public nuisance law.

Either way, Big Oil has a long, litigious road ahead—and it’s still very unclear what the outcome will be, says Burger. After all, “tobacco litigation failed a lot,” he says. “There were a lot of tobacco lawsuits before the big multi-state settlement was reached.”