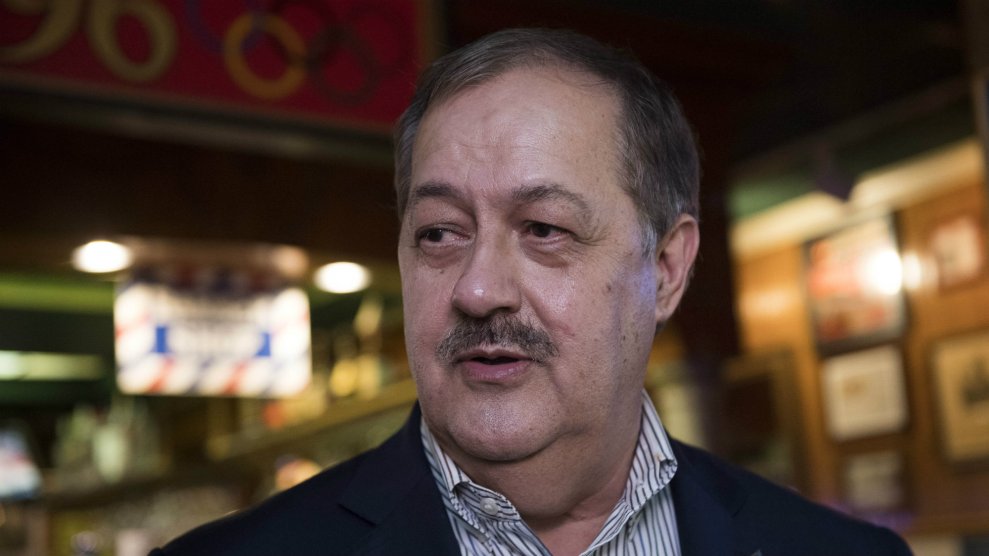 Former coal baron and ex-con Don Blankenship might actually do the unthinkable and snag the Republican nomination in the West Virginia Senate primary Tuesday. According to Politico, Republicans—who are largely worried a Blankenship win this week could lead to a Moore vs. Jones-style repeat—are worried after viewing surveys that show the upstart is surging, and is now “narrowly ahead” of his opponents.

Blankenship, the former CEO of Massey Energy Company, served one year in prison for conspiring to violate federal mine safety in the lead up to the 2010 explosion at the Massey-owned Upper Big Branch mine that left 29 people dead. Once he was released, he announced that he would run for Senate. As Mother Jones‘ Tim Murphy recently reported, Blankenship is actually using his criminal history as a selling point, painting himself as a martyr to the Obama administration—something that he is hoping will resonate with the Make America Great Again crowd. As Tim wrote,

In the Trump era, as the president and his allies assail the integrity of the Justice Department and warn of a shadowy “deep state,” Blankenship’s comeback is tailor-made for the moment. He pitches himself as a “political prisoner,” a sort of Nelson Mandela of the war on coal. He holds the federal Mine Safety and Health Administration (MSHA), not his former company, responsible for the deaths of his miners, and he has said that the government’s “cover-up” of what happened at Upper Big Branch is “far worse than Benghazi.

It’s not hard to understand why the Republican establishment might be uncomfortable with Blankenship as a candidate. His team has run several controversial TV ads, including one that referred to the family of Senate Majority Leader Mitch McConnell and his wife, Transportation Secretary Elaine Chao, as “chinapersons.” Later, Blanksenhip defended the ad by saying it wasn’t racist because he never mentioned any of the races, which according to him, are “Negro, white Caucasian, Hispanic, Asian.”

National Republicans have been scrambling to get West Virginians to vote for one of the other GOP candidates, state Attorney General Patrick Morrissey or Congressman Evan Jenkins. An outside group affiliated with McConnell spent more than $1 million on television ads telling voters to reject Blankenship. And over the weekend, the Morrissey campaign, which had remained largely silent on Blankenship, released a robocall saying that a vote for Blankenship will guarantee a Democratic win in November.

But the Blankenship team isn’t worried about the attacks. “We have run hard from beginning to end,” campaign strategist Greg Thomas told Politico, “and we are encouraged by the desperation we are seeing from our opposition.”