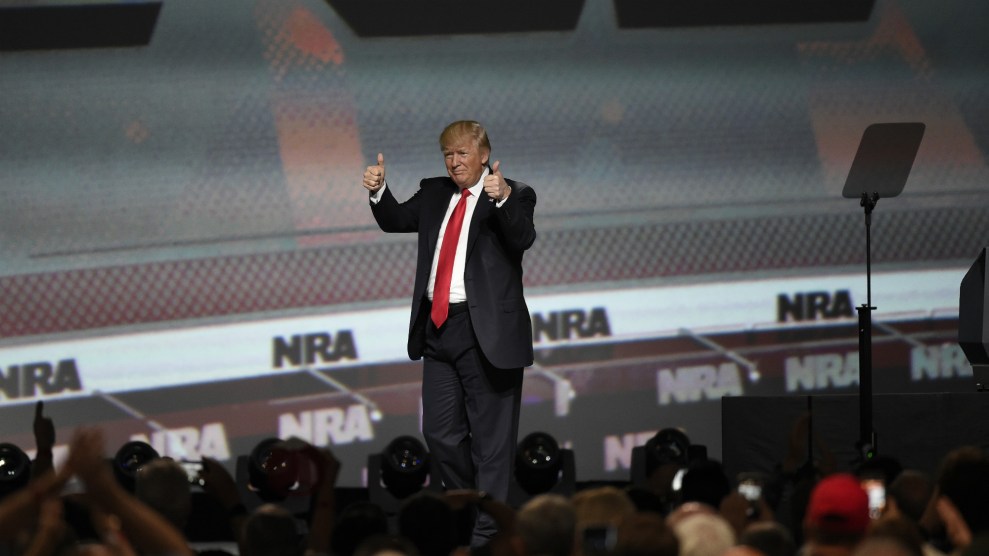 The night before President Donald Trump spoke at the 2016 National Rifle Association convention, his eldest son met with a Russian politician who had been pitched to the Trump campaign as an “emissary” of Vladimir Putin who could set up a back channel to the Kremlin. Since then, that Russian official, Alexander Torshin, a former deputy governor of the Russian central bank who is reported to be under investigation for possibly funneling money to the NRA, has bragged about his relationship with the NRA, and the gun group has reluctantly acknowledged that it has received money from Russian sources. But with Trump set to address this year’s NRA convention this weekend, there remain few clear answers about the group’s ties to Russian funders—in part because the organization has sidestepped queries from Congress about its Russian connections.

The primary question is how much money the NRA has accepted from Russians. Sen. Ron Wyden (D-Ore.) has posed the question to the NRA several times, and now the Federal Election Commission is asking as well—and the FBI may be, too. Politicians and political action committees can’t accept money from a foreign government, but a nonprofit like the NRA can, as long as the money is kept away from any political activity the group undertakes. The information the NRA has provided to Wyden has clarified little.

In a February letter to the NRA, Wyden asked for details on its financial connections to Russia; specifically, how much money the NRA’s political arm has accepted from Russian sources, and what internal controls the group has in place to ensure no foreign money is spent on American elections.

The group’s response did little more than restate the question. “As a longstanding policy to comply with federal election law, the NRA and its related entities do not accept funds from foreign persons or entities in connection with the United States elections,” the NRA’s general counsel, John Frazier, replied. Frazier said that most of the group’s donations come from small donors, but “significant” donations are “vetted,” though he provided no details on how.

In a follow-up letter in March, Wyden tried again, adding questions about Torshin’s relationship to the NRA and citing Torshin’s involvement with a trip made by an NRA delegation to Russia in 2015. Among the NRA officials on that trip was Joe Gregory, who chaired the group’s “Golden Ring of Freedom” program, which awards special status to donors who have given the NRA at least $1 million. Wyden asked whether any Russians were Golden Ring participants.

In a testy response, the NRA acknowledged to Wyden, “While we do receive some contributions from foreign individuals and entities, these contributions are made directly to the NRA for lawful purposes.” The group also stated, “For the relevant time period (2015-2016), we have found no significant contributions to any NRA entities sent from any foreign address or drawn on any foreign financial institution.” Wyden had not asked about that particular time period.

After yet another letter from Wyden, the NRA finally conceded in early April that it had, in fact, received $2,500 or more from at least 23 individuals who were Russian or living in Russia. The group said these donations were made for a variety of purposes.

In the same letter, the NRA made clear that it had no interest in further discussing donations from Russian sources. “We believe this and our previous letters have provided enough information to address any legitimate concerns about these issues,” wrote Frazier, the group’s lawyer. “Therefore, given the extraordinarily time-consuming and burdensome nature of your requests, we must respectfully decline to engage in this beyond the clear answer we have already provided.”

The NRA has one of the most sophisticated and successful fundraising operations of any nonprofit. In 2016, it hauled in $266 million.

The NRA has denied that the FBI is investigating its Russian connections. But on the eve of its convention, the NRA appears to be gearing up to deal with a more aggressive interrogator than Wyden. According to CNN, the group’s attorneys have begun setting aside years of documents relating to Torshin, a move that sources told CNN could be simple due diligence, but also appeared to be a sign that the gun group is “bracing” for a full-on investigation.