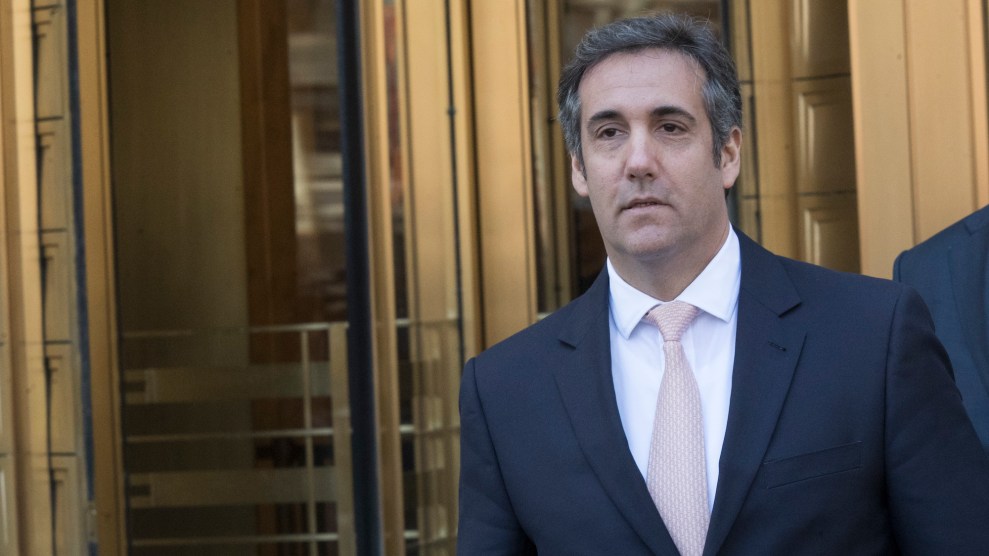 On Tuesday afternoon, Michael Avenatti, the on-media-everywhere lawyer for Stormy Daniels, released a report with a bombshell claim: An American company controlled by the Viktor Vekselberg, a Putin-friendly Russian oligarch, paid $500,000 last year to Michael Cohen, President Donald Trump’s embattled lawyer and fixer. The allegation carries tremendous implications and raises the question of secret financial ties between Russia and Trump world. The report also states that Cohen received payments from a Swiss pharmaceutical companies and other foreign sources. Though the report includes no evidence, the New York Times reported Tuesday reviewed documents that largely confirmed the claims.

Avenatti says that Vekselberg and his cousin Andrew Intrater, the CEO of the American subsidiary of Vekselberg’s company, Renova, routed the money to Cohen through an entity called Columbus LLC. That appears to be a limited liability corporation linked to Columbus Nova, Renova’s US subsidiary.

Avenatti also alleges that Cohen used a bank account to engage in suspicious bank transactions totaling $4.4 million between October 2016 and January 2018. Avenatti has not said how he obtained the information contained in his report.

Avenatti’s report suggests Cohen set up a company, Essential Consultants LLC, that he used to sell access to President Trump. Payments came from firms in Korea, Hungary, Singapore, Malaysia, Taiwan, and Israel, Avenatti says. He claims Novartis, a Swiss pharmaceutical company, paid $399,920 to Cohen’s firm in late 2017 and early 2018. After the payments, Trump met with Novartis’ CEO at the World Economic Forum in Davos, Switzerland. The document also says Essential Consultants received $200,000 in four payments from AT&T in late 2017 and early 2018. AT&T confirmed the payments in a statement reported by CNBC: “Essential Consulting was one of several firms we engaged in early 2017 to provide insights into understanding the new administration. They did no legal or lobbying work for us, and the contract ended in December 2017.”

Avenatti’s report could launch a massive case of alleged influence-peddling and may be a real game-changer in the Trump-Russia scandal. Vekselberg, as Mother Jones has previously reported, has an unusual set of ties to Trump and his inner circle.

This Russian oligarch was a partner of Wilbur Ross in rescuing and reviving a collapsed Cypriot bank that had been full of shady Russian money. Not surprisingly, Ross downplayed his curious connection to Vekselberg during his 2017 confirmation hearings for the commerce secretary position he now holds.  And after the 2016 election, Vekselberg’s cousin—Intrater—donated $250,000 to Trump’s inauguration committee. Intrater also gave a $35,000 contribution to a joint fundraising committee for Trump’s reelection and the Republican National Committee. He had previously made no large political contributions.

Avenatti’s report claims that Vekselberg’s payment to Cohen came through Intrater’s company. If Avenatti is correct, this would prompt an obvious lead for special counsel Robert Mueller to follow: Did the money Intrater donated to Trump come from his cousin the oligarch? That is, did a wealthy Russian with Kremlin contacts funnel money to Trump and the Republicans?

Mueller seems to be already on this trail. As the New York Times reported last week, “Federal agents working with Mr. Mueller stopped Mr. Vekselberg, a billionaire businessman, at a New York-area airport this year, searched his electronic devices and questioned him, according to people familiar with the matter.” According to CNN, the agents asked Vekselberg about the payments to Cohen. Vekselberg also attended the now infamous December 2015 Moscow gala for RT, the Russian propaganda outlet, where ret. Gen. Michael Flynn sat at the head table with Vladimir Putin.

In April, the Treasury Department sanctioned Vekselberg and Renova along with other Russian oligarchs and companies. The sanctions freeze Vekselberg’s US assets, bar him or Renova from using the US banking system, and prohibit Americans from doing business with him.

In the hours after Avenatti tweeted out his seven-page report, media outlets—including Mother Jones—pressed him to provide confirmation of his assertions, which suggest a convergence of the Stormy Daniels affair and the Russia controversy. If Avenatti can back up these allegations, the scope of the Trump-Russia scandal could dramatically shift. The old watchword of scandals is “follow the money.” Avenatti—who recently made the brazen prediction that Trump would not serve out his term—is now saying this fundamental rule of investigations is essential for getting to the bottom of the current mess. He owes it to the American public to show whatever proof he has.

Michael Cohen’s lawyer did not respond to a request for comment.