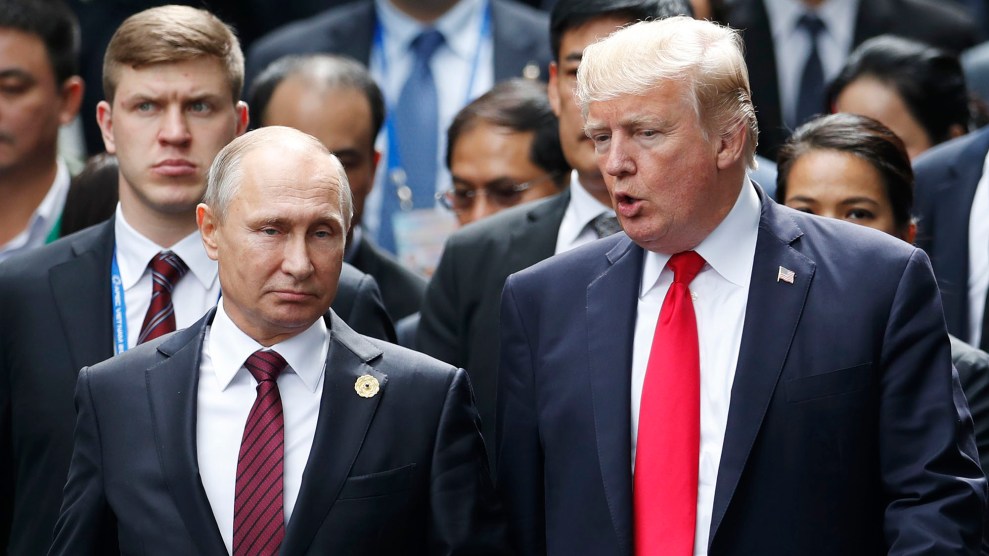 Trump eventually got a meeting with Putin.Jorge Silva/Pool Photo via AP

Donald Trump really, really wanted to meet with Vladimir Putin in 2013. It has been reported that Trump hoped to have a face-to-face with the Russian president when he brought the Miss Universe contest, which he co-owned at the time, to Moscow in November of that year. But testimony released Wednesday by the Senate Judiciary Committee shows that Trump, prior to the contest, went so far as to use his Russian contacts to present a direct request for a meeting with Putin.

As part of its investigation of the June 2016 Trump Tower meeting—during which top Trump campaign officials met with a Kremlin-connected Russian emissary whom they were told was bringing them dirt on Hillary Clinton—the Senate committee privately interviewed Irakly “Ike” Kaveladze. One of the attendees at the Trump Tower meeting, Kaveladze was a longtime US-based employee of Aras Agalarov, the Russian oligarch who partnered with Trump to stage the beauty contest in Moscow. Agalarov and his son Emin, a pop singer, had arranged the Trump Tower meeting, using Rob Goldstone, Emin’s publicist, to work out the details with Donald Trump Jr.

In his first interview with the committee, Kaveladze claimed that the Trump Tower meeting was the only instance he knew of Agalarov attempting to set up a get-together between the Trump crowd and government-related Russians. But Kaveladze had neglected to mention another time this happened. In a subsequent interview with the committee, held in March of this year, Kaveladze stated that in 2013 he had witnessed Agalarov make a phone call in which the oligarch “secretly requested [a] meeting between Mr. Trump and Mr. Putin.”

Kaveladze said he heard only part of this phone call. He told the committee he assumed the person on the other end of the line was Dmitry Peskov, Putin’s spokesman and senior aide. Kaveladze placed the date of the call at about 40 days before the 2013 Miss Universe contest and said that Trump’s request for a sit-down with Putin came through Goldstone, who was then in Moscow helping plan the Miss Universe broadcast (which would feature Emin as a performer). “Donald Trump through Mr. Goldstone requested that meeting, Donald Trump Sr.,” Kaveladze told the committee.

As soon as Trump and the Agalarovs announced in June 2013 that the contest would be held in Moscow that year, the future president demonstrated that he saw the event as a chance to get close to Putin. He tweeted, “Do you think Putin will be going to The Miss Universe Pageant in November in Moscow—if so, will he become my new best friend?”

As reported in the recently released Russian Roulette: The Inside Story of Putin’s War on America and the Election of Donald Trump (by Michael Isikoff and David Corn), while Trump was in Moscow for the pageant, he was fixated on the possibility of meeting Putin. He constantly asked Aras Agalarov and others if he would get to see or talk to the Russian leader and if Putin would come to the event. When Trump was told that Putin could not meet him and would be unable to attend the Miss Universe contest, he was bitterly disappointed. But Trump suggested to an associate that they could spread the word that Putin had indeed stopped by the event. “No one will know for sure if he came or not,” Trump told this associate.

Trump viewed holding the Miss Universe contest in Moscow as a stepping stone to landing a big deal in the Russian capital to develop a Trump tower there. And after the event, he and Aras Agalarov did sign a letter of intent for such a project—which would likely require financing from Kremlin-friendly banks and the approval of Putin’s regime. A meeting with Putin could have been useful for an American businessman trying to score a major venture in Russia. (Sometime in 2014—after the Obama administration and the European Union imposed economic sanctions on Russia in retaliation for Putin’s annexation of Crimea—the Trump-Agalarov project fizzled out.)

Testimony and documents released by the Senate Judiciary Committee also show that in 2015, Emin Agalarov tried to arrange a meeting between Trump and Putin. On July 22, 2015—a month after Trump entered the presidential race—Goldstone sent Trump’s private secretary an email with an invitation from Emin for Trump to attend a 60th birthday celebration for Aras Agalarov in Moscow.

Trump’s secretary wrote back, “I will certainly make Mr. Trump aware of this invitation, and I know he will be honored that Emin thought of him. However, given his presidential campaign, it’s highly unlikely he will have time on his calendar to go to Moscow.” In response, Goldstone dangled more than just a party: “I totally understand re Moscow—unless maybe he would welcome a meeting with President Putin which Emin would set up.”

The new documents do not contain a response from Trump’s secretary to this offer. But the message suggests the Agalarovs were looking to help Trump long before they cooked up the 2016 Trump Tower meeting.