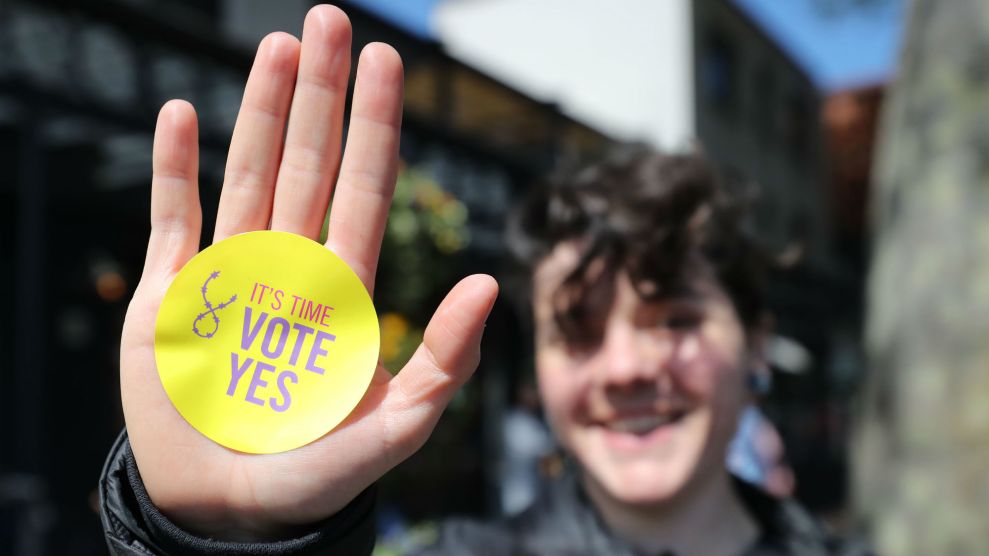 On Friday, Ireland made history when the country voted to repeal its constitution’s Eighth Amendment, one of the strictest abortion laws in Europe. The referendum’s passage is a huge win for reproductive-rights advocates in a Catholic country that for decades pledged to give women and fetuses an “equal right to life” and made abortion punishable by up to 14 years in prison.

The final numbers were overwhelmingly in favor of repeal.

Earlier today, there was an initial breakdown of the yes/no split by age group:

The Irish government is expected to introduce legislation that allows abortion in the first 12 weeks of pregnancy.

Prime Minister Leo Varadkar, appointed in June 2017, has called himself “pro-life” but he also voiced his support of the repeal, saying the amendment was “too restrictive.”  He described the vote as “the culmination of a quiet revolution in Ireland.”

In January after his cabinet agreed to hold the referendum, Varadkar said, “I do not believe that the Constitution is the place for making absolute statements about medical, moral, and legal issues. An issue that is not black and white can never be explained in black and white.”

In 2016, more than 3,000 Irish people traveled to England to have abortions. Research suggests that at least a few hundred Irish women order abortion pills online per year, although an exact number is unknown.

For decades, many Irish people saw the amendment as a symbol of the country’s deeply-held Catholic faith. Ireland officially banned abortion in 1983, largely in response to 1973’s United States Supreme Court Roe v. Wade ruling, which legalized abortion in the US. But in 2012, a woman named Savita Halappanavar died in an Irish hospital after she was denied an abortion. A year later the law was amended to allow abortions in cases when a woman’s life is at risk—but didn’t allow the procedure in cases of rape or incest or fetal abnormality.

Irish citizens from all over the world flew to Ireland to vote in the referendum, and the hashtag #HomeToVote was trending on Twitter this week.

That photo. ‘Yesterday, we travelled because we wanted to. Today, we vote for the women who travelled because they were forced to.’ @lynnenright for @thepooluk #repealtheeighth https://t.co/8CfuoHUPL4 pic.twitter.com/8muSVVl4p2

Irish actors including Saoirse Ronan, Cillian Murphy, and Liam Neeson have voiced their support for legalizing abortion in Ireland.

The campaign for the referendum also included non-Irish citizens. In the weeks leading up to the election, there were concerns that foreign entities, including groups in the US, were trying to influence Irish voters. Amnesty International Ireland and the Abortion Rights Campaign, for instance, were required to return political grants of $150,000 and $25,000, respectively, to George Soros’s Open Society Foundations. Government-transparency group Transparent Referendum Initiative and UK-based news org openDemocracy also exposed a slew of Facebook ads run in Ireland, purchased by non-Irish accounts.

Legal abortion will likely continue to be a contentious topic in Ireland, as it is in the US. But advocates say the vote represents a changing tone in Ireland’s politics. People from all over the world celebrated on social media after the results came in Saturday morning, and people in Ireland flooded the streets.

I voted YES in 2015 to my first referendum and it was incredible. I voted YES in 2018 and I am humbled, happy, elated for all women in Ireland. The results are incredible! I feel proud and happy to be part of that vote. Let's keep at it! Proud to be a new Irish!