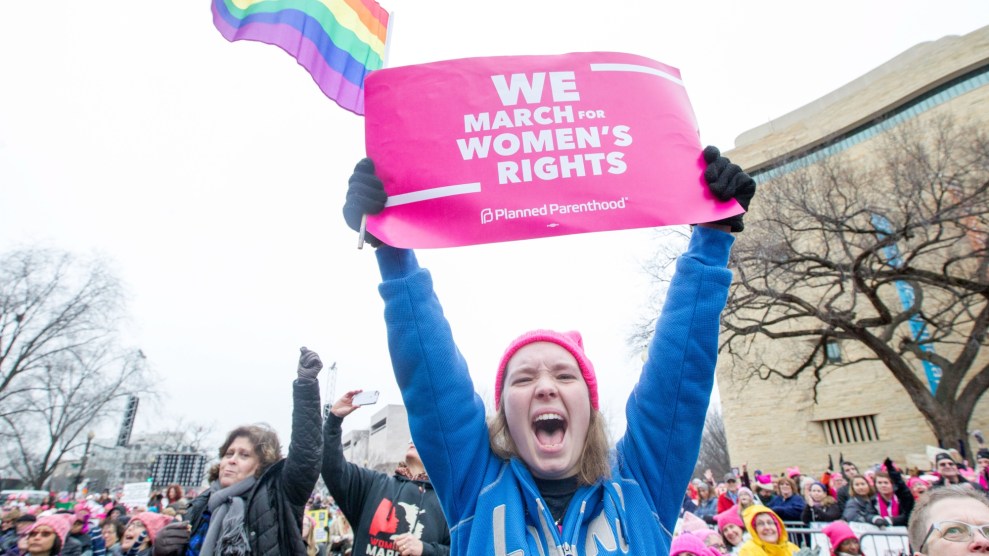 A woman cheers as feminist Gloria Steinem takes the stage at the Women's March on Washington on January 21, 2017, in Washington, D.C. Alex Edelman via ZUMA Wire

On Wednesday night, the Illinois House of Representatives narrowly voted to ratify the Equal Rights Amendment, the proposal to include gender equality in the United States Constitution. The amendment was passed by the state Senate in April, 36 years after the last deadline to ratify passed and 46 years after it was passed by Congress. Illinois is now the 37th state to ratify, meaning only one more state needs to ratify the amendment before it heads back to the federal government for approval. Nevada ratified the ERA last year.

In Springfield, the bill passed by a vote of 72-45—just one more vote than needed. “I am appalled and embarrassed that the state of Illinois has not done this earlier,” state Democratic Rep. Stephanie Kifowit told the Chicago Tribune. “I am proud to be on this side of history and I am proud to support not only all the women that this will help, that this will send a message to, but I am also here to be a role model for my daughter.”

We now have 37 states that have ratified the ERA. 1 more to go.#ERANOW #MeToo

Congratulations to everyone who worked so hard to Ratify the ERA in Illinois THEY JUST VOTED YES!!!!

However, even if the ERA passes in the states, its legal status is murky. Detractors say that ratifications that happened after the 1982 deadline imposed by Washington could be considered moot. Supporters reject this argument, pointing to an amendment that was ratified and added to the Constitution more than 200 years after it was introduced.

In March, I spoke with Illinois activists about their campaign for ratification. As I wrote then, Illinois has a complicated history with the proposed amendment, which has seen a resurgence in popularity thanks in part to the #MeToo movement:

As state after state ratified following passage in 1972, supporters in Illinois, a bastion of progressivism in the Midwest, rallied in Springfield around what they saw as imminent victory in the state. But the Phyllis Schlafly-led opposition also honed in on the state, and year after year, as the issue was brought before the state legislature, Schlafly prevailed. Since 1982, proposals to ratify the ERA have been re-introduced only sporadically in the state, most recently in 2014, when it came close after passing in the Senate, but ultimately failed in the House because of a lack of energy on the issue.

The bill’s longtime supporters, state Sen. Heather Steans and Rep. Lou Lang, note that this year is already proving to be different. For one, there are several Republicans not up for reelection who Lang anticipates are likely to give their support. And, says Steans, the Senate’s brand new women’s caucus—formed in the wake of the #MeToo reckoning, will discuss the ERA before the vote.

“The stars are aligned,” Lang told Mother Jones. “Given the climate of our country today, I think it is a very important opportunity.”

ERA activists had their eye on Arizona as a likely contender for ratification, but state Republicans blocked a vote on the bill in April, leaving the ERA’s next move unclear.