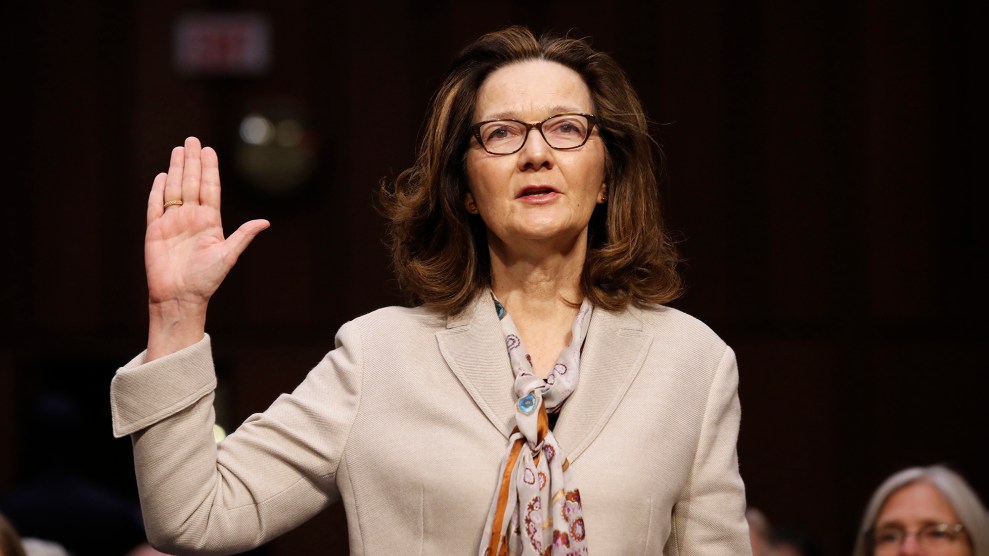 CIA nominee Gina Haspel is sworn in during a confirmation hearing of the Senate Intelligence Committee on Capitol Hill, Wednesday, May 9, 2018 in Washington.Alex Brandon/AP

Gina Haspel, the acting head of the CIA and President Donald Trump’s nominee to become its next director, repeatedly refused to weigh in on the morality of torture during her Senate confirmation hearing on Wednesday. The dynamic was perhaps best displayed during a back and forth with Sen. Kamala Harris (D-Calif.), who questioned Haspel on the agency’s record of torturing detainees it believed were connected to terrorist activity.

Harris: One question I have not heard you answer is do you believe that the previous interrogation techniques were immoral?

Haspel: Senator, I believe that CIA officers to whom you refer…

Haspel: Senator, I believe that CIA did extraordinary work to prevent another attack on this country given the legal tools that we were authorized to use.

Harris: Please answer yes or no. Do you believe in hindsight that those techniques were immoral?

Haspel: Senator, what I believe sitting here today is that I support the higher moral standard we have decided to hold ourselves to…

Harris: Will you please answer the question.

Haspel: Senator I believe that we should hold ourselves to the higher moral standard outlined in the Army Field Manual.

Harris: Okay, so I understand that you have not answered the question, but I’m going to move on.

Haspel held a management-level role in a program launched shortly after the 9/11 attacks in which so-called “enhanced interrogation techniques,” including waterboarding and physical abuse, were deployed against detainees. While former intelligence officials, including a top CIA lawyer at the time, have said Haspel ran the program, she says she didn’t. The CIA, under Haspel’s watch, has continued to withhold records that would shed more light on her role. It is known that Haspel was involved in destroying 92 videotapes documenting one detainee’s interrogation, even though such materials had been requested in court proceedings and by congressional investigators.

Sen. Mark Warner (D-Va.) also asked Haspel about the morality of what she participated in after 9/11. Acknowledging Haspel’s commitment in her prepared remarks that, if confirmed, there would never be another similar interrogation program at the CIA, Warner asked, “With the benefit of hindsight, do you believe the program, the interrogation program, was consistent with American values?”

Haspel said that “with some distance between us and the events of 9/11, the Congress, and indeed our nation, have had the opportunity to have a debate about the interrogation standards we want to use as the United States of America. We have decided to hold ourselves to a stricter moral standard…I support the United States holding itself to that stricter moral standard.”

Warner called the answer “legalistic,” and said he needed a better sense of her “moral code” in light of Trump’s praise of “tough” treatment of terrorist suspects and his proclamation that “torture works.”

Haspel has broad support among her CIA colleagues. On Tuesday, the Cipher Brief, a website that features writing by former national security officials, published a letter signed by 72 retired CIA officers supporting her nomination. Earlier this week, Trump took to Twitter to defend Haspel’s links to the agency’s Bush-era interrogation program, tweeting that she’d “come under fire because she was too tough on Terrorists.”

My highly respected nominee for CIA Director, Gina Haspel, has come under fire because she was too tough on Terrorists. Think of that, in these very dangerous times, we have the most qualified person, a woman, who Democrats want OUT because she is too tough on terror. Win Gina!

He reiterated the defense the next day:

Gina Haspel, my highly respected nominee to lead the CIA, is being praised for the fact that she has been, and alway will be, TOUGH ON TERROR! This is a woman who has been a leader wherever she has gone. The CIA wants her to lead them into America’s bright and glorious future!

Not everybody in a position to know about what happened is willing to give her a pass. Navy Lieutenant Alaric Piette, a military lawyer who defended a man tortured as part of the program Haspel oversaw 15 years ago, told the Daily Beast‘s Spencer Ackerman that Haspel did not stand up to immoral orders at the time.

“At a time when we needed professionalism and leadership, we got torture instead,” he said. “As a defense attorney, I don’t think people should be defined by the worst thing we’ve ever done. We’re all greater than that. But at the same time, that doesn’t mean there shouldn’t be some consequences…I think it should be a bar for her rising up to that level.”

As the committee prepared to enter a classified session, Warner used his closing statement to underscore Haspel’s unwillingness to explore torture’s morality. Warner also responded to Sen. Tom Cotton (R-Ark.), who had earlier pointed out that Obama CIA Director John Brennan was confirmed by the committee even though he, too, had been at the CIA when the torture program was active.

“[Brennan] quite explicitly repudiated the techniques and programs, stated that he expressed his personal objections in some previous views to agency colleagues, which I think is a relevant piece of information when we considered Mr. Brennan’s testimony,” Warner said in defense of his support for Brennan’s 2013 nomination.

Warner told Haspel that she had to earn the committee’s trust, the trust of Congress, and the trust of the American people. And notwithstanding the wide support she has among former colleagues, Warner said he believes she doesn’t think that current American values align with the torture program conducted after 9/11: “I wish you would have said that more clearly and more directly.”