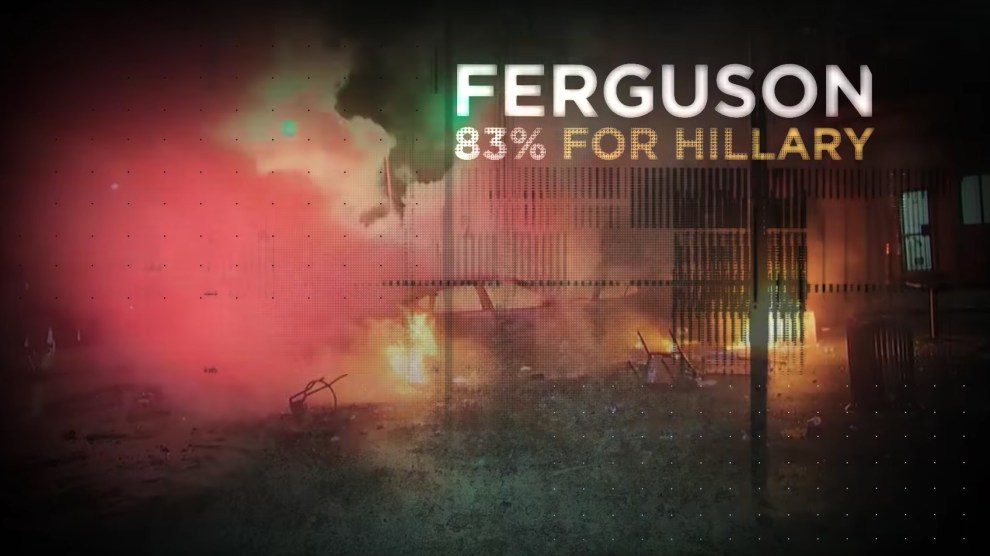 Evan Jenkins for US Senate/YouTube

Don Blankenship has been drawing bipartisan condemnation over his racist—and bizarre—rhetoric in the West Virginia Republican Senate primary. “Swamp captain Mitch McConnell has created millions of jobs for China people,” Blankenship says in one recent ad targeting the Senate majority leader. He then attacks the family of McConnell’s wife, Transportation Secretary Elaine Chao, who was born in Taiwan. “His China family has given him tens of millions of dollars,” Blankenship says.

But Blankenship’s bigoted statements—along with his candidacy’s general outlandishness—have overshadowed an equally inflammatory ad campaign launched by one of his supposedly more mainstream GOP opponents. Several weeks ago, Rep. Evan Jenkins released this spot, which takes aim at Hillary Clinton for telling an audience that her 2016 presidential campaign had “won the places that are optimistic…moving forward, and [Donald Trump’s] whole campaign…was looking backwards.”

“It’s Hillary who’s got it backwards,” Jenkins says to the camera. “The big cities she won are the places flooding our state with heroin—where lawlessness, looting, and liberalism rule. Chicago’s the murder capital of America. Yet they want to take our guns away? That’s backwards.”

While Jenkins is saying this, the viewer sees footage of a man who appears to be African American being arrested in Detroit; fires burning, apparently during the riots sparked by police violence in Baltimore and Ferguson, Missouri; a violent anti-Trump protest in Berkeley, California; and a crime scene in Chicago. The message is unmistakable: Black people who voted for Clinton, along with a handful of university town antifa activists, are somehow to blame for the opioid epidemic in West Virginia, a state that is 92-percent white.

West Virginia is the epicenter of the opioid crisis, with more than 43 deaths per 100,000 residents in 2016. It’s true that a significant amount of heroin and other opioids are smuggled through large cities; according to the Drug Enforcement Agency, traffickers from Detroit, Columbus, Pittsburgh, and Chicago supply heroin and controlled prescription drugs to addicts in West Virginia. A 2016 investigation by Washington, DC’s WJLA noted that “police across the area say their heroin addicts are driving to Baltimore to buy the deadly drug, sometimes even twice a day.”

But it’s absurd for Jenkins to imply that his state’s drug tragedy is the fault of people of color who live in liberal cities that have been home to protests against police brutality. As WABC put it, “Baltimore is not the reason why heroin use is exploding in local communities…everyone with whom we spoke blamed the escalating demand for heroin on the wave of prescription pain pill abuse. The cheaper form of the same is heroin. It’s an opioid.”

According to the DEA, “The extraordinarily high abuse rate of opioids [in West Virginia] is attributed in part to the large number of jobs in heavy manual labor such as mining, timbering, and manufacturing. These professions often cause injuries to workers that are treated with opioid pain relievers, which in turn can lead to addiction.” Over the past decade, drug companies have have shipped a staggering number of prescription opioids into small West Virginia towns. The Charleston Gazette-Mail has reported that distributors sent more than 780 million doses of oxycodone and hydrocodone to the state’s pharmacies over a six-year period—a scandal that the paper says is “widely blamed with starting the opioid crisis.”

For his part, Blankenship has cried foul over Jenkins’s ad—but not for the reasons you might hope. “Wait a minute,” the narrator of a Blankenship response ad declares. “The problem with this Jenkins ad is that Jenkins voted to let West Virginia cities take away our gun rights.”