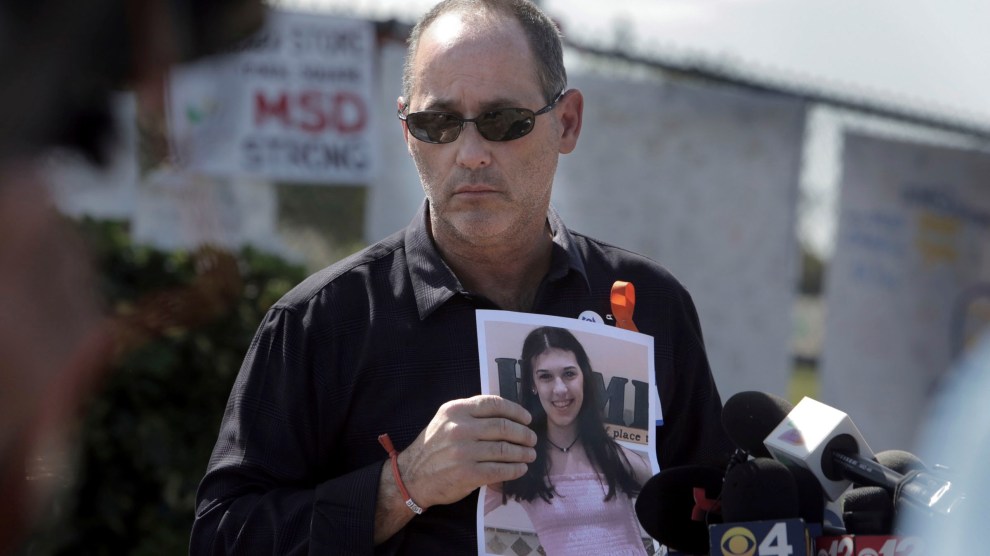 Fred Guttenberg, father of Jaime Guttenberg, holds a picture of his daughter, who was murdered in Parkland.Jose A. Iglesias/Miami Herald via AP

On Friday, 10 people were murdered and another 10 were injured when a gunman opened fire at Santa Fe High School near Houston. The massacre is the fifth mass shooting in the United States in 2018. For the families of the students who were murdered in Parkland, Florida, just three months ago, Friday’s events struck especially close to home. Mother Jones reached out to some of the Parkland parents for their reactions to the latest tragedy.

Fred Guttenberg, who lost his daughter Jaime in the Parkland shooting, has since become an outspoken gun control advocate. In a statement Friday to Mother Jones, Guttenberg said he was “pissed by the lack of any response by the President, Speaker Ryan, and Majority Leader McConnell”:

First, my heart breaks for the families and I am here for them.  It is a very painful process that they are about to go through and I want to offer them any support possible. Second, I feel like February 14th all over again. I cannot believe this is happening again. This is tragic and sad. Since my daughters murder, I have had optimism by the changes happening locally and in the business community. However, I have been pissed by the lack of any response by the President, Speaker Ryan, and Majority Leader McConnell. They have failed. Time for them to get off their ass, develop a spine, and do what is right for those they serve and not the gun lobby. This can be fixed and the time to do so has already passed. Enough is enough. I am thankful for the opportunities that I have had to work with elected leaders on getting something done. This week I was in Ohio and they asked why they should do something as the citizens are not pushing for it. I told them that was a good thing as it means Parkland did not happen in Ohio. I said do not use that as a false sense of security as it is only a matter of time until the next one. Now the next one happened. I hope our President, the Speaker, and the Majority leader get serious and are ready to speak with me about doing something.

Max Schachter lost his son Alex in Parkland. He’s launched a task force through his foundation, Safe Schools for Alex, that is working to strengthen security measures at schools—an effort that’s happening with input from the FBI and the Department of Homeland Security. “If we don’t harden the schools,” he said in an interview Friday, “we’re going to continue to have the slaughter of our future leaders and teachers.” He also criticized how media outlets cover mass shootings:

I feel terrible for the parents and the community. I know what we went through. I know what they’re going to go through. They’re basically in the depths of hell right now. There’s nothing I can say—it’s just horrible. I feel bad that all the things we’ve been trying to do since the disaster here couldn’t prevent it.

It just renews the sense of urgency in my mind, and I hope in the rest of the country, that we need to harden the schools. For the last 19 years since Columbine, we’ve done the same thing, and nothing has changed. We’ve focused on mental health and prevention. And while those are important, if we don’t harden the schools, we’re going to continue to have the slaughter of our future leaders and teachers. It’s inconceivable why we have not hardened the structures. After 9/11, they hardened the cockpits and the airports, and that has worked. After Oklahoma City, they hardened the federal buildings, and that has worked. They have not hardened the schools, and we’ve continued to see attack after attack after attack.

One thing that has been consistent with all of these tragedies is that it’s been well-reported that all of these killers seek notoriety, fame, and celebrity status from these mass killings. We need to prevent that from happening. I need all the media’s help to stop publicizing their names. If we stop publicizing their names, they will not be famous anymore. They are not an individual anymore, they are a monster, and we need to call them “The Monster from Santa Fe.” We need to call them out for what they are. They are not human beings anymore. The media is enabling them—they’re adding fuel to the fire and they are part of the problem. They need to stop using their names and call them what they are, and they’re monsters.

Ryan Petty, who lost his daughter Alaina in the Parkland shooting, offered condolences over Twitter as he awaited more information. Petty participated in a roundtable discussion Thursday with Education Secretary Betsy DeVos and other families affected by school shootings. The discussion was intended to inform the work of DeVos’ school safety commission. Petty announced earlier this week that he and Lori Alhadeff, who lost her daughter Alyssa in the shooting, are running for seats on the Broward County School Board.

Heartbroken for the victims and their families. Will await more details before commenting further, but I'm certain this was foreseeable and therefore preventable. #SantaFeHighSchool

My heart & tears go out to all those at Santa Fe. More families feeling the devastation of gun violence.
This CANNOT continue to be the norm for our children, our schools, our nation.
How many more innocent lives will it take for our leaders to take action?#GunReformNow https://t.co/8HaX5Sb5qD