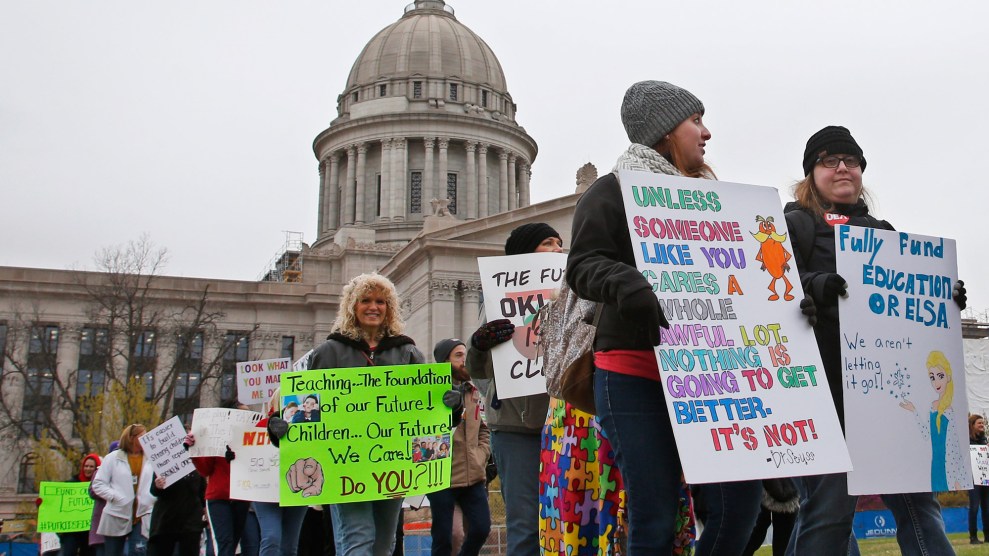 On Monday morning, tens of thousands of Oklahoma teachers stormed the state Capitol to urge lawmakers to approve better pay and more funding for their classrooms. At the same time, more than 800 miles away, a similar demonstration was under way: thousands of Kentucky teachers marched to Frankfort to rally against new changes to the state pension program and echo the call from their Oklahoma peers and educators across the country.

Inspired by the nine-day strike in West Virginia that ended in 5 percent raise for teachers, educators in Oklahoma, Kentucky, and Arizona have walked out of schools in recent weeks and headed to their state Capitols to urge legislators to demand adequate school funding after years of cuts. Monday’s protest prompted 200 Oklahoma schools to close.

Last week, Republican Oklahoma Gov. Mary Fallin signed a bill that raised teachers’ salaries by up to $6,100, depending on experience, by raising gas and oil taxes and adding tobacco for the first time since 1990—a departure from previous years of tax cuts from the deeply conservative state legislature. Oklahoma teachers are demanding a $10,000 raise to each teacher’s salary, a $5,000 increase for support staffers, and $200 million increase in school funding, over three years.

The #oklahomateacherwalkout is about much more than teacher raises, it’s also about school funding. We went years to school where we had books with no spines, no paint to fix the chipped walls, and plywood boards instead of bathroom stall doors. That needs to change.

We are doing this for the kids! #oked❤ pic.twitter.com/s88ttFCaIf

"This is the result of a decade of under-funding public schools… In 11 years, zero raises," says President of the National Education Association on Oklahoma teachers walking off the job. https://t.co/LHEvx8c0T1 pic.twitter.com/VLWyNGSq1Z

Meanwhile, in Kentucky, teachers rallied outside the Capitol building while lawmakers debated a new budget that includes proposals for education cuts. On Friday, hundreds of teachers called in sick and shuttered schools in 26 districts after the Kentucky legislature quickly passed a 291-page bill that cut public employee pensions and capped the number of sick leave they can use for retirement. The bill awaits the signature of Gov. Matt Bevin, who last week tweeted that Kentuckians owe a “deep debt of gratitude” to lawmakers who voted for the bill. Kentucky attorney general Andy Beshear says that he would sue to block the pension changes, and the statewide teachers’ union has pledged to join such a lawsuit. Because of the rally, 25 school districts out of the state’s 120 were closed on Monday. (The remaining districts were closed for spring break.)

It’s unclear how long the teachers’ protests will continue. Oklahoma City and at least 50 other districts are closed Tuesday due to continued demonstrations, and Oklahoma Education Association president Alicia Priest told the crowd at the rally that educators would continue to press lawmakers to heed their demands this week. Teachers in Arizona could also take action soon: Educators there have demanded 20 percent salary raises and more education funding. They are threatening to strike if their demands are not met. Arizona Gov. Doug Ducey said last week that a pay raise will not happen this year.