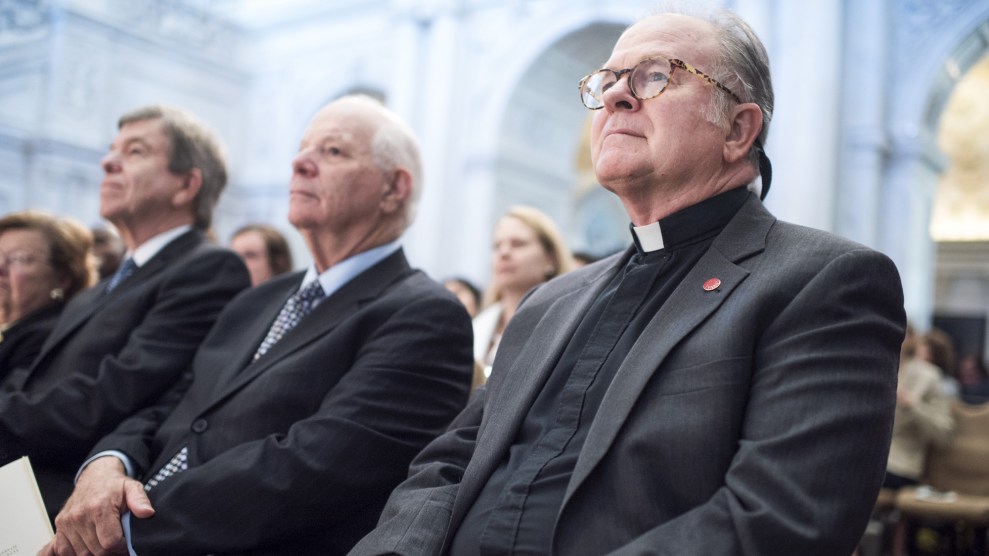 Reverend Patrick Conroy, the chaplain for the US House of Representatives, surprised federal lawmakers when he announced his retirement earlier this month. As it turns out, his move wasn’t voluntary. New reports from The Hill and The Washington Post suggest that the chaplain, who is a Roman Catholic priest, was forced out by House Speaker Paul Ryan (R-Wisc.). The move raises questions from religious leaders and lawmakers, who see Conroy’s ouster as the politicization of a traditionally nonpartisan role.

According to the publications, House sources who had recently met with Rev. Conroy said Ryan’s office told him that he must resign or he would be fired. Rev. Conroy’s letter of resignation, submitted to the House Speaker corroborates the reports. “As you have requested,” Conroy wrote, “I hereby offer my resignation as the 60th chaplain of the United States House of Representatives.”

The chaplain’s primary duty, according to chamber rules, is to offer an opening prayer at the beginning of each day the House is in session. But the spiritual leader serving in the role—who, to date, has always been a Christian, but could belong to any faith—also provides pastoral counseling to the entire House community.

The reasons for Conroy’s dismissal remain unclear. AshLee Strong, a spokesperson for Speaker Ryan, said the resignation had been Ryan’s decision but did not offer a reason. A Democratic lawmaker told The Hill that Ryan’s decision may have stemmed from a perception that the chaplain—whose role is strictly nonpartisan—appeared to be more sympathetic toward the Democratic party. Conroy delivered a prayer last year before a House debate about the GOP tax bill in which he urged lawmakers to “guarantee that there are not winners and losers under the new tax laws.” This was perceived by Ryan as being critical of the legislation and reportedly drew the House Speaker’s ire. (A GOP aide told The Hill  that Conroy’s ouster had nothing to do with any particular prayer.)

Rev. Conroy, who is a Jesuit, had served as House Chaplain since 2011 at the recommendation of then-Speaker John Boehner (R-Oh.) and Minority Leader Nancy Pelosi (D-Calif.). The Jesuits have long  been considered to be the most liberal order of priests in the Roman Catholic Church.

Before becoming chaplain, Conroy served as superior of the Jesuit community in Portland, Oregon, where he also taught theology and coached softball for the city’s Jesuit High School. After his ordination in 1983, he worked as a pastor on the Colville and Spokane Indian reservations in his native Washington state. When the 67-year-old chaplain announced his retirement last week, Speaker Ryan, who is also Catholic, commended Rev. Conroy for his service, calling him “a great source or strength to support our community.”

Conroy declined to comment on the reports. A spokesperson for Pelosi said the Minority leader had been informed of Conroy’s departure, but did not agree with Ryan’s decision. (Ryan’s office disputes this claim.)