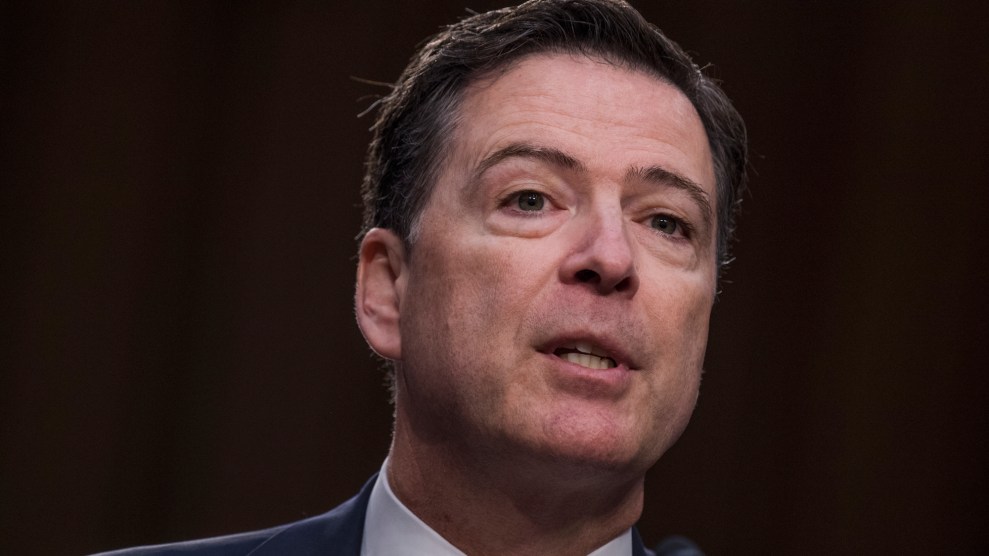 Portions of former FBI director James Comey’s upcoming memoir have started to leak—and the revelations are making (ahem) quite a splash. The New York Post is reporting that Comey wrote that in a conversation with President Donald Trump in January 2017, Trump actually asked Comey to investigate allegations surrounding the infamous “pee tape.”  Trump wanted Comey to debunk the claim that he’d hired prostitutes to urinate on a bed in Moscow in 2013.

The reason? The president wanted to convince first lady Melania Trump that there was no chance the stories about a “pee tape” were true.

“He brought up what he called the ‘golden showers thing’…adding that it bothered him if there was ‘even a one percent chance’ his wife, Melania, thought it was true,” Comey wrote, according to the Post. “He just rolled on, unprompted, explaining why it couldn’t possibly be true, ending by saying he was thinking of asking me to investigate the allegation to prove it was a lie. I said it was up to him.”

That conversation apparently happened in January 2017, at the same dinner where Trump demanded that Comey pledge “loyalty” to him. Meanwhile, the Washington Post—which says it has a leaked copy of the memoir—is reporting that Trump was “fixated” on the “golden showers thing,” keeping Comey behind after a meeting with national intelligence chiefs to discuss the allegations:

According to Comey’s account in a new memoir, Trump “strongly denied the allegations, asking—rhetorically, I assumed—whether he seemed like a guy who needed the service of prostitutes. He then began discussing cases where women had accused him of sexual assault, a subject I had not raised. He mentioned a number of women, and seemed to have memorized their allegations”… Comey describes Trump as having been obsessed with the prostitutes portion of the infamous dossier compiled by former British intelligence officer Christopher Steele, raising it at least four times with the FBI head. The document claimed that Trump had watched the prostitutes urinate on themselves in the same Moscow suite that President Obama and first lady Michelle Obama stayed in previously “as a way of soiling the bed,” Comey writes.

Trump offered varying explanations to convince Comey it was not true. “I’m a germaphobe,” Trump told him in a follow-up call on Jan. 11, 2017, according to Comey’s account. “There’s no way I would let people pee on each other around me. No way.” Later, the president asked what could be done to “lift the cloud” because it was so painful for first lady Melania Trump.

Comey’s book, “A Higher Loyalty: Truth, Lies and Leadership,” is due out next Tuesday.