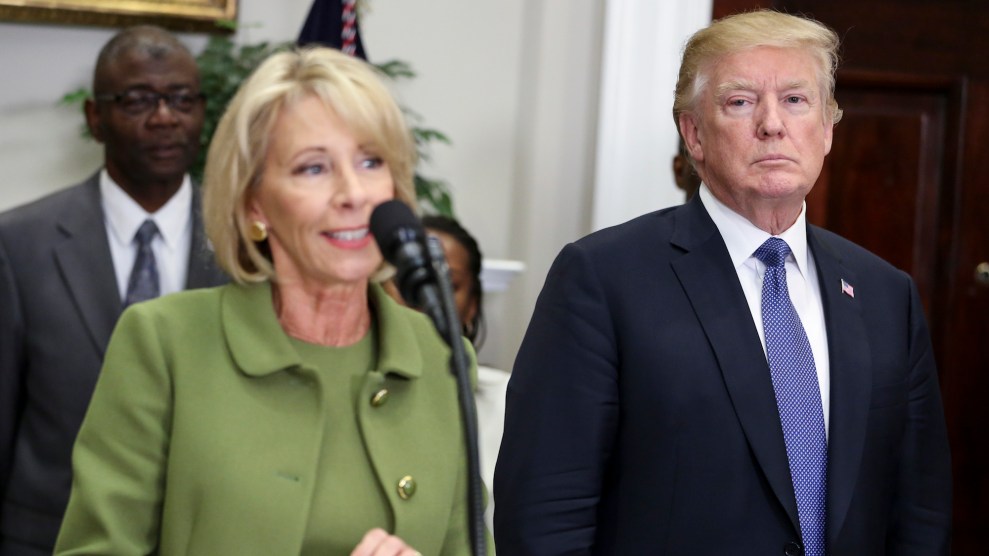 Black students and students with disabilities are disciplined more harshly and more frequently at school than their peers, according to a new report from the federal government’s nonpartisan watchdog organization. The findings, released Wednesday by the Government Accountability Office, could have serious implications for the Trump administration’s efforts to strengthen school safety and discipline measures in the wake of the Parkland school shooting.

The report found that black students, boys, and students with disabilities were disproportionately disciplined in public schools during the 2013-14 school year. The disparities began as early as preschool and occurred regardless of the type of disciplinary action taken or the type of school attended. The study also controlled for students’ household income and found that the disturbing pattern applied to black students regardless of their socioeconomic class. Though black students represent roughly 15 percent of all public school students, they account for nearly 40 percent of all students suspended from school.

The report builds upon GAO findings from May 2016 that showed racially and socioeconomically isolated schools—that is, highly segregated schools—had disproportionately higher rates of students who were suspended or expelled. Both reports were requested by Rep. Bobby Scott (Va.), the top Democrat on the House education committee, and Rep. Jerry Nadler (N.Y.), the top Democrat on the House Judiciary Committee. These findings are further bolstered by Education Department civil rights data, which show that black students are 2.2 times more likely to be either referred to law enforcement or arrested at school than white students.

The latest study was released in the midst of a debate among federal lawmakers about school safety, sparked by February’s school shooting at Parkland’s Marjory Stoneman Douglas High School. While Democrats have tried to keep the focus on new gun control measures, Republicans have steered the conversation toward repealing the Obama administration’s 2014 guidance that sought to mitigate the very inequities documented in these reports. (Since the new study looked at the school year that began before the 2014 guidance was released, there’s little information available about its impact.)

Republicans, including Sen. Marco Rubio (Fla.), have argued that the Obama-era recommendations—which aim to limit racial disparities in discipline and the overuse of extreme punitive measures, such as expulsions and school-based arrests for nonviolent offenses—have allowed violent students to remain in school, cultivating the conditions that led to February’s school shooting. A spokesperson for the House education committee Democrats, meanwhile, insists Republicans are simply looking for an excuse to repeal the 2014 guidance, which has been on Secretary of Education Betsy DeVos’ chopping block since before the Parkland shooting.

Recent statements from members of the Trump administration have not bolstered confidence that the executive branch understands the dangers posed by discriminatory discipline. At a March Senate Judiciary Committee hearing, Sen, Kamala Harris (D-Calif.) asked FBI Acting Deputy Director David Bowdich if President Donald Trump’s proposal to arm teachers would include implicit bias training designed to prevent teachers from shooting innocent students based on unconscious racial prejudice. Bowdich responded that he’d “never really put the two together.” And late last month, when DeVos appeared before a House Appropriations subcommittee to discuss her department’s proposed 2019 budget, she dodged questions about whether she thinks racial bias contributes to the high rates of discipline experience by students of color.

Wednesday’s report was released on the same day as DeVos’ school safety and climate summit, in which educators, school officials, and others discussed whether the Obama-era guidance should be rescinded. The conversations, which were closed to the press, will help inform the work of DeVos’ school safety commission, an administration-wide group that Trump has tasked with providing recommendations to prevent future school violence.