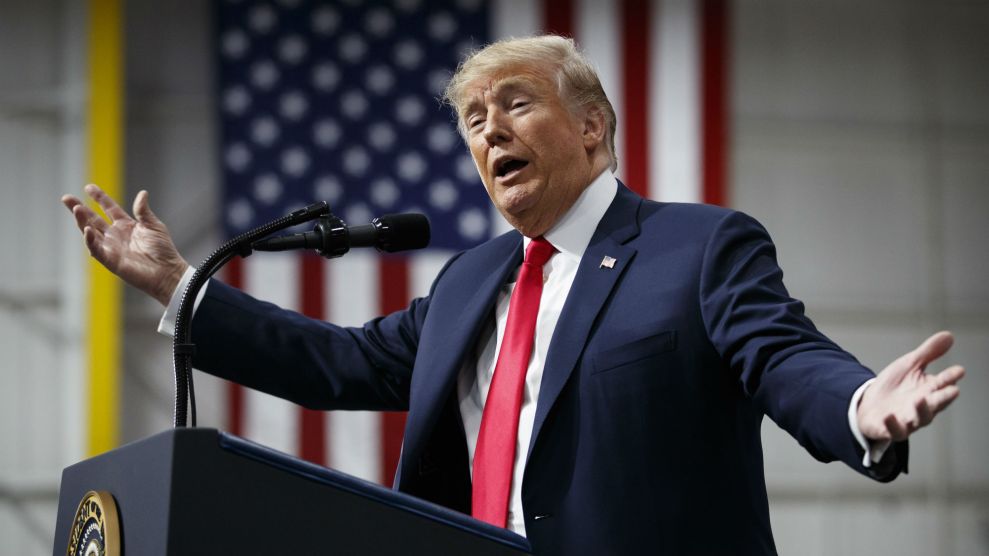 President Donald Trump flew to southwest Pennsylvania tonight for a rally intended to bolster Rick Saccone, the Republican candidate with a razor-thin lead in the special election to fill an open seat in the state’s 18th congressional district. (Trump won the district by 20 points in 2016.) The president began his remarks with a quick endorsement of Saccone—and then proceeded to spend the next 75 minutes riffing, ranting, griping, and gloating about pretty much everything. Everything but Saccone.

Here is an exhaustive, if somewhat incomplete, list of all the things Trump talked about that had nothing to do with his ostensible reason for coming to Pennsylvania.

Trump is taking credit for the Olympics?

"Without Donald Trump, the Olympics would have been a total failure."

Trump in #PA18 says he believes North Korea's claim that they won't launch missiles before their (possible) meeting with Trump. "I believe that. I really believe that. I think they want to make peace. It's time. And we've shown great strength."

Trump in #PA18 points to media in the room: "If I don't win the election their ratings are going to go so far down, they're rating are going to down, can you imagine covering Bernie or Pocahontas," referring to Elizabeth Warren.

Trump says his new slogan for 2020 is going to be…

Here's the video of the President of the United States saying that a black congresswoman is a "very low IQ individual." (via Fox) pic.twitter.com/3aBErbgTAH

Trump is once again calling for capital punishment for drug dealers, citing the oppressive government in Singapore as an example for the U.S. to follow.

Trump is now giving us a state-by-state, minute by minute, recounting of his election night victory. Nothing—zero—to do with #PA18 or Rick Saccone.

Trump remembers he's in Pennsylvania for a reason: "And Conor Lamb, Lamb the sham. He's trying to act like a Republican. Looks like a nice guy. I think I'm better looking than him. And he's slightly younger than me. Personally I like Rick Saccone. I think he's handsome."

I don't think any president has talked about fire marshals as much as this one.

"You think her life is so easy folks? Not so easy," he says of Melania Trump.

And finally, at the finish of his one hour and 20 minute ramble, Trump remembered—oh right!—Rick Saccone:

"They're all watching you," Trump says to Rick Saccone. "I won this district by 22 points. Look at all those red hats, Rick."