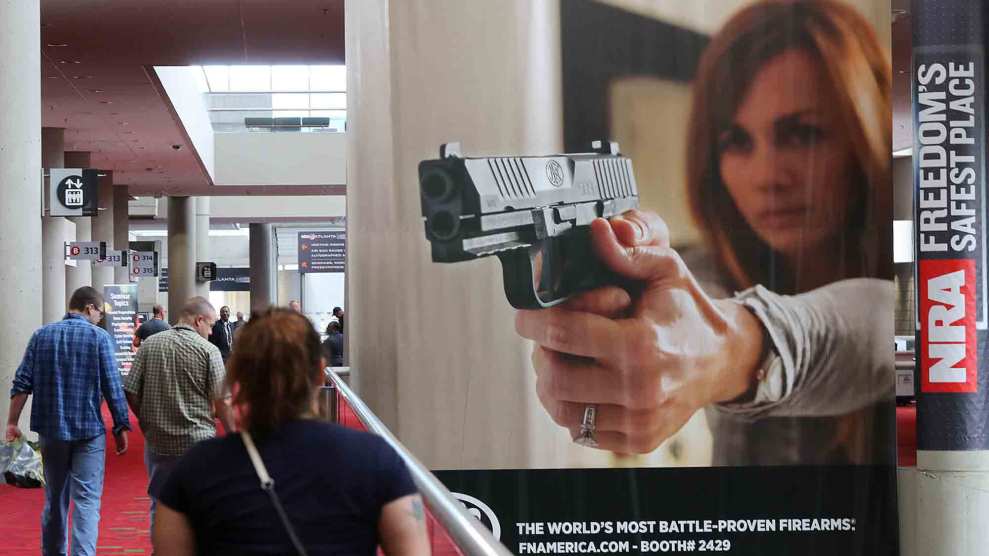 When the National Rifle Association kicked off its annual conference in Phoenix in 2009, Rep. Ann Kirkpatrick, a first-term Democrat whose district covered an Illinois-sized swath of rural Arizona, welcomed its members with open arms. “I am proud that my state is hosting the group that has protected that right for 138 years,” she said in a statement. “This is a chance for Arizonans to show our nation’s leaders we will not let them take away our freedoms.” Kirkpatrick walked the walk, too; earlier that year she had written to Attorney General Eric Holder asking him to shelve a proposal to reinstate the assault weapons ban. When she ran for reelection one year later, she boasted of an A-rating from the NRA.

Now, after an unsuccessful campaign for Senate in 2016, Kirkpatrick is a leading contender to win the Democratic nomination in the smaller and less rural 2nd Congressional District, and she’s singing a far different tune than she was a decade ago. After last month’s school shooting in Parkland, Florida, Kirkpatrick ripped into the organization she once endorsed. “It’s not enough to fight for common-sense reforms anymore,” she tweeted. “It’s time to fight the gun companies fighting against those reforms. It’s time to fight the NRA directly.” Not long after, at a candidate forum near Tucson, Kirkpatrick announced her support for a new ban on assault weapons.

Kirkpatrick, once the model of a rural, pro-gun Democrat, is emblematic of the broader shift within the party. Once home to a vocal minority of NRA-backed elected officials and reluctant to wade into the messy politics of gun rights, the Democratic caucus has taken an increasingly aggressive approach to gun control. And Democratic candidates, fueled by organizations such as Everytown for Gun Safety and an outpouring of grassroots energy and anger, are determined to put gun control on the ballot not just in November, but in 2018 primaries, too. Candidates who once touted their NRA ties have found themselves on the defensive, or they have simply changed their positions with the times. In some cases, it’s both.

“[Ann Kirkpatrick] really tried hard to get that rating and to keep it. She used it against Republicans she ran against in previous campaigns. She was proud of it, and I think that right there is disqualifying.”

As she campaigns for the southern Arizona seat once held by Gabby Giffords, Kirkpatrick is also pushing universal background checks, stricter rules to prevent domestic abusers from getting firearms, and a repeal of the Dickey Amendment, which prevents the the Centers for Disease Control and Prevention from researching the effects of gun violence. But in the process she’s come in for sharp criticism from former state Rep. Matt Heinz, the party’s 2016 nominee and her most formidable competition in the primary. Heinz’s campaign created a website, “Flagstaff Ann,” devoted to Kirkpatrick’s opposition to gun control in her old district and has repeatedly flogged Kirkpatrick’s old gun-friendly statements on Twitter.

“It wasn’t just she accidentally tripped and fell into the A-rating and never talked about it,” Heinz says. “She really tried hard to get that rating and to keep it. She used it against Republicans she ran against in previous campaigns. She was proud of it, and I think that right there is disqualifying.”

“Ann helped them,” he adds. “She carried water for the NRA for a decade or more and now we’re all supposed to say, ‘Oh great, she one time said the right thing, so never mind, that’s great’? This is gonna keep coming up.”

Kirkpatrick’s transition to gun control advocate has been rocky at times. She pushed a bill to mandate national concealed-carry reciprocity during her first term but was swept out of office in the tea party wave.

She traces the shift in her thinking to the 2011 shooting that left Giffords severely injured and took the life of John Roll, a federal judge whom Kirkpatrick once clerked for, and the 2012 shooting in Newtown, Connecticut. After returning to Congress in 2013, Kirkpatrick backed universal background checks and wrote an op-ed saying that “everything should be on the table,” including “examining our assault-weapons laws and our mental-health care system,” but she walked back the assault-weapons comment a few weeks later. Although she continued to tout the A-rating on her website until just before she launched her Senate bid in 2015, she hasn’t scored that high in years—her last rating, in 2016, was a D.

For all her past support, the NRA never returned the favor. It opposed her in 2008 and helped unseat her in 2010 despite the A-rating. Kirkpatrick now touts the D-rating as a badge of pride and boasts that the organization has spent $150,000 over the years trying to defeat her. And while Heinz is making a hard push to tie her to her past statements—and her old district—Kirkpatrick has the support of the local constituent whose words perhaps carries the most weight on this issue: Giffords. The former congresswoman, along with her husband, Mark Kelly, were early endorsers of Kirkpatrick’s campaign in the 2nd District.

“Ann Kirkpatrick has more than proven herself as a gun safety champion,” Giffords said in a statement. “While in the House, she directly addressed the role of domestic violence in gun tragedies and challenged the ban on the CDC research. She is exactly the kind of fighter we need back in the House to stand up to the gun lobby and enact meaningful reform. I trust Ann to represent me and Arizona on this critical issue.”

Other Democrats who have been past NRA favorites have changed their tune in the far-different 2018  climate. Former Ohio Attorney General Richard Cordray, who is now running for governor, boasted an A-rating from the NRA in 2010. Last week he suggested that policymakers “rethink our approach to military-style weapons used to perpetrate mass shootings.” That open-ended statement wasn’t enough for former Rep. Dennis Kucinich, a challenger for the Democratic nomination, who called the assault weapons ban (which he backs) “a defining issue in the Democratic primary election.” On Friday, the Kucinich campaign emailed reporters a video of Cordray addressing a “second amendment rally” on the steps of the state capitol in 2010:

In New Jersey, Democratic state Sen. Jeff Van Drew is the favorite to win the nomination in the race to replace retiring Republican Rep. Frank LoBiondo. Van Drew has the support of the Democratic Congressional Campaign Committee and, more importantly, every county chairman in the district—but a 100 percent rating from the NRA, and past donations from the gun lobby, could make things more difficult. At a recent town hall forum he was confronted by a 17-year-old who accused the state senator of lying to her high school government class by asserting he had never taken donations from the NRA:

Emily McGrath, 17, and Donna Challender of Tuckerton confront State Sen. Jeff Van Drew – a Democratic candidate for #nj02 congressional seat- on his pro-gun record and with evidence he took $1,000 from NRA in 2011. pic.twitter.com/L89zq8vBIZ

And in Minnesota, Rep. Tim Walz boasted an A-rating from the NRA for five straight successful campaigns for Congress but has emphasized a slate of “common sense” gun control measures as he seeks the Democratic nomination for governor—including an assault weapons ban. Last fall, he donated $18,000—the amount he’d received from the NRA during his career—to a fund for families of veterans, and after the Parkland shooting he published a Minneapolis Star-Tribune op-ed asking voters to “please understand my full position on guns.”

The party-wide shift on gun control has been driven in part by a growing national infrastructure to press the issue. Everytown and its partner organization, Moms Demand Action, as well as groups like Giffords’, have been flooded with donations and volunteers since the Parkland shooting. “We’ve had almost 115,000 new volunteers come into the door this week,” said Shannon Watts, Moms Demand’s founder, and Everytown held some 610 different events in the second half of February to bring those volunteers into the fold. The organization is partnering with billionaire Tom Steyer for a voter registration drive focused on gun control, backing candidates who are putting the issue front-and-center, and with its expanding volunteer army, hopes to put candidates on-record about what is quickly shaping up to be a litmus test.

Past dalliances with the NRA aren’t necessarily a deal-breaker for these groups. Watts points to Sen. Kirsten Gillibrand (D-N.Y.) as an example of a Democrat who has turned the corner on gun control. “She used to be more aligned with the NRA and now completely rejects them and their agenda and their money and is strongly a proponent for gun safety, and we’re very excited to work with her on these efforts,” Watts says. “So it really depends.”

The NRA has not been a passive actor on this shift—it’s been actively enabling it. When Walz and Kirkpatrick were first running for Congress, the gun lobby had a noticeably less partisan tilt. As recently as 2010, more than 20 percent of the House candidates who received campaign funds from the NRA were Democrats. Now the NRA supports just two Democrat in the House—Texas Rep. Henry Cuellar and Georgia Rep. Sanford Bishop. Don’t expect that number to grow much this fall.