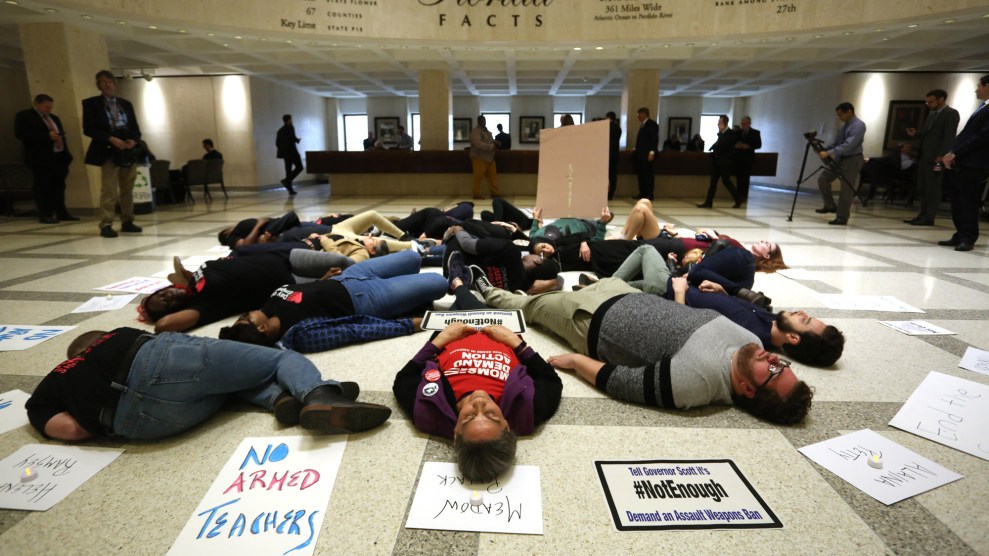 20 protesters participate in a die-In rotunda of the Florida Capitol to call for gun restrictions.Scott Keeler/Tampa Bay Times via ZUMA Wire

Update March 9, 2018 3:45 p.m. ET: On Friday, more than three weeks after the deadly Parkland shooting, Florida Gov. Rick Scott signed new gun control and school security measures into law. This is the first time in decades new gun restrictions have passed in the state. “I called on the Legislature to give me a bill that will allow us to make our schools far safer, allowing for a much greater law enforcement presence, and for hardening our school buildings,” Scott said at a Friday press conference. “This bill does that.”

On Wednesday, Florida lawmakers approved a package of gun restrictions and school safety measures, defying the National Rifle Association and creating new regulations in response to the deadly Valentine’s Day shooting at a high school in Parkland, Florida.

The legislation creates a three-day wait period for gun purchases and raises the minimum age for all gun purchases to 21 years old. It also includes $400 million in funding from the state’s General Revenue Fund toward mental health services, including mobile crisis teams and school safety resources like bulletproof glass, school resources officers, and metal detectors.

The most controversial measure in the bill allows school personnel who have completed a training program to serve as “school marshals” and carry firearms on school grounds through a voluntary opt-in program.

The bill, named the Marjory Stoneman Douglas High School Public Safety Act after the school where 17 people were killed in a mass shooting last month, now awaits Gov. Rick Scott’s signature. Scott, who has consistently opposed arming teachers but agrees with most of the bill’s provisions, told reporters at the Capitol that he would review the bill and consult with parents before he made a decision. “My goal is that this never happens again to a parent in our state,” Scott told reporters. If Scott does not veto the bill, it will automatically become law after 15 days.

The proposal to arm school staff has drawn significant opposition from state Democrats and Parkland shooting survivors. When Florida senators met over the weekend in a special session to consider the legislation, the Senate version included deputizing 10 teachers in every school, which meant about 37,000 educators could have carried guns on school grounds. But by the time senators approved the bill on Monday, that provision for teachers had been removed.

Even before lawmakers approved the Marjory Stoneman Douglas High School Public Safety Act, school boards were already debating whether to participate in any school marshal program. On Tuesday night, the Hillsborough County School Board, which includes Tampa, voted to opt out of the program if the bill were to become law.

Before Florida lawmakers voted on the measure, an “emergency alert” sent by the NRA urged members to tell Republican lawmakers to vote against the bill. When lawmakers met for seven hours of debate on Tuesday, state House Republicans repeatedly blocked attempts by Democrats to amend the bill to ban assault rifle purchases, require background checks on all gun purchases, and give cities and counties the ability to approve stronger gun measures than the state. Rep. Jared Moskowitz, a Democrat who graduated from Stoneman Douglas High School, tried to pass an amendment to remove coaches, librarians, and other staffers from the list of those eligible to participate in the marshal program. He was unsuccessful.

“The legacy of the city of Parkland is going to be that we armed teachers,” Moskowitz said. “It doesn’t matter what the truth is.”