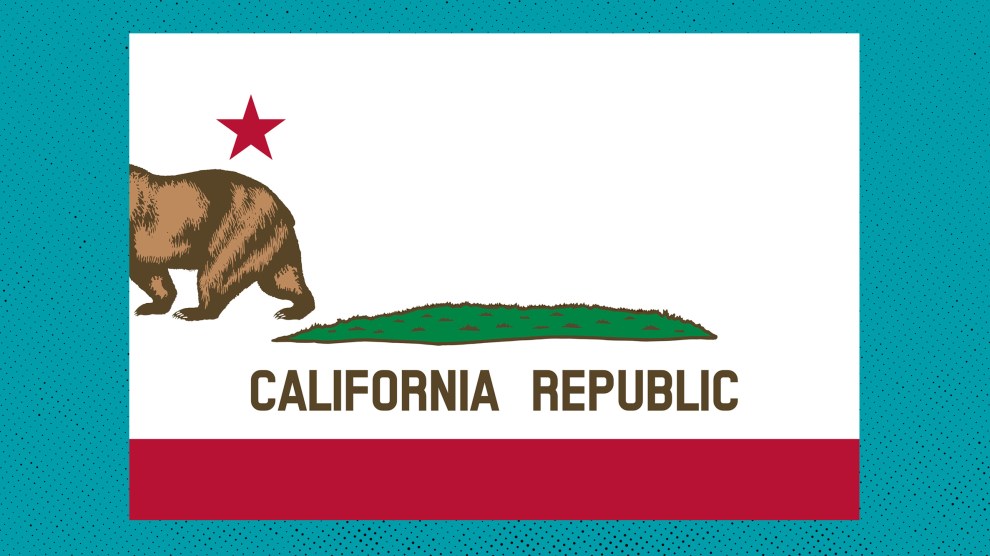 Adam Ringel felt the stirrings of national pride at an early age. “Ever since I was a kid, I identified as a Californian, not an American,” he recalled as he sat in the back of a café in San Francisco’s Mission District during a meet-up titled “Coffee With Secessionists.” The laid-back separatist gathering was sponsored by the California Freedom Coalition, one of a handful of organizations that have emerged in the wake of Donald Trump’s election to promote the idea that California should peacefully split off and form an independent country.

“For me it’s all about values and the increasing chasm between California values and American values,” said Ringel, a 32-year-old member of the California National Party. A stuffed grizzly bear sat on the table in front of him. The state flag—modeled after that of the short-lived California Republic—was draped in the corner. Californians, Ringel explained, “have a different brand. We’re not Americans, we’re—different. I don’t necessarily want to say better, but different.”

“We’re not Americans, we’re—different. I don’t necessarily want to say better, but different.”

Californians often feel like they’re a breed apart, but that sense has intensified lately. Hillary Clinton swept the state with more that 61 percent of the vote. Democrats have controlled the governor’s mansion and both houses of the legislature since 2011. Gov. Jerry Brown and the state’s Democratic leadership have presented the state as a liberal counterweight to the Trump administration’s immigration, drug, and environmental policies. At the recent California Democratic Party convention, Lt. Gov. Gavin Newsom declared, “If Trump is the question, then California is the answer.” In turn, the president has declared the state “out of control” and has threatened to cut off funding to its cities, police, and universities. Last week, Attorney General Jeff Sessions invoked the Civil War as the Justice Department sued to block the state’s sanctuary laws. Gov. Brown said the move was “an act of war.”

“Trump is testing us,” said Dave Marin, the California Freedom Coalition’s director of research and policy and the organizer of the coffee klatch. But the real issue, the 39-year-old software developer says, is not that Washington is un-Democratic but undemocratic. For too long, the federal government has treated California like it’s just another one of the 50 states. The state pays more in federal taxes than it gets in return. (Its legislative analyst estimates that the state receives 99 cents of federal spending for every $1 in taxes paid; the average state gets $1.22.) Why does a “donor state” with more than 39 million people get the same number of senators as a tiny, budget-sucking state like West Virginia? Why did 80,000 votes in the upper Midwest trump Clinton’s 4 million-vote margin in California? Why shouldn’t Californians just take their $2.6 trillion economy and go home?

The U.S. government is a “junkie” hooked on the state’s money, Ringel said. “California is acting as an enabler.”

“We have an abusive husband who spends all his money on guns,” Marin added.

The following day, a rival group of independence supporters gathered on the north side of the state capitol in Sacramento. Speaking through a bullhorn to a crowd of around 20 people and 2 dogs, Louis Marinelli, the 31-year-old cofounder of Yes California, called for “a political divorce on Valentine’s Day based on irreconcilable differences.”

The noontime rally was the official “relaunch” of Yes California’s “Calexit” campaign, which got off to a bumpy start in late 2016. Marinelli was living in Russia at the time, sparking skepticism about his intentions. (The California National Party tweeted, “Hands off California, Putin. We won’t take orders from your puppet Moscow Marinelli.”) In April 2017, Marinelli said he was quitting his own group and would not be returning to “occupied California.” Yes California’s effort to gather signatures for a ballot measure to make the California its own nation was scrapped.

But now Marinelli says he has moved back to California for good. Asked if the cloud of his Russian interlude still hangs over Calexit, he laughs. “Clouds bring rain, and rain makes flowers. We’re looking forward to springtime.”

Following a few speeches, the group trooped to the attorney general’s office to file the paperwork for the California Self-Determination Referendum Act, a new initiative that would ask voters if they want to hold a binding independence referendum in May 2021. (To get on the November 2020 ballot, supporters will have to collect nearly 366,000 signatures by the end of the year.) “This building will not be a state legislature—it will be the capitol of our country!” Marinelli declared as the marchers circled the capitol grounds, drawing quizzical looks from government employees on their lunch breaks. “Delaware is a state. Wyoming is a state. California is a nation!”

Since California joined the union in 1850, there have been more than 200 proposals to reconfigure it as its own nation or as multiple states. Secessionists nearly hijacked the state’s 1879 constitutional convention; the final document pointedly declared that “The State of California is an inseparable part of the United States of America.” In 2014, Silicon Valley billionaire Tim Draper floated a plan to create “Six Californias,” perfectly highlighting the state’s cultural and economic divides by establishing four affluent bluish enclaves and two poor conservative ones. (He has since downsized his plan to three Californias.)

Yes California paints independent California as a progressive utopia with universal health care, free college, lower taxes and a bare-bones military. However, Marinelli says, breaking away doesn’t just appeal to disaffected coastal liberals. He cites Yes California supporters who also back Jefferson, a nearly eight-decade effort to break off Northern California (and part of Oregon) into a new state. “A lot of people up in the Jefferson movement think that if they help Calexit become a reality, and California secedes from the union, they then can have a self-determination referendum of their own to secede from California and rejoin the American union as the 51st state. That’s kind of a workaround, right?”

Polls find that about one-third of Californians support secession. (About a quarter of all Americans say states should be able to secede.) But none of California’s elected officials support it. Marcus Ruiz Evans, Yes California’s president, said the political mainstream will eventually come around. “When a majority of Californians say they want this, then the people in here”—he gestured to the capitol—“will say they were always for it.”

Practically speaking, there’s no doubt that the Golden State could go it alone. The thornier issue is how it might do so legally. In 1869, the Supreme Court ruled that no state may constitutionally leave our “indestructible Union” without “consent of the States.” Independence supporters have latched onto this suggestion that a preponderance—half? Two thirds?—of the other 49 states might consent to an amicable breakup. “Essentially, California being independent is going to come from getting kicked out of the United States,” said Marin.

Fault lines have already formed between the secessionists over the question of whether they can check out anytime they like or if they can never leave without permission. The primary split is between the California Freedom Coalition and the California National Party, which advocate a gradual move toward greater autonomy, if not full sovereignty, and Yes California and its ally CalConCon (a pro-sovereignty group calling for a new constitutional convention), which want full independence as soon as possible. “A straight-up declaration of independence,” Marin says is “dangerous and doesn’t buy you a whole lot,” while Evans thinks the incrementalists are being too cautious.

The secessionists say that their movement will outlast Trump and the current political moment. Yet their sense of exceptionalism and urgency are nothing new. A British visitor to California in the early 1880s noted that the state, though “thoroughly American,” was “capable of standing alone in the world.” Its citizens, he wrote, were “impatient” and “ready to try instant, even if perilous, remedies for a present evil.” As Evans told me as he stood in front of the capitol, “When Californians get upset, radical things happen very quickly.”