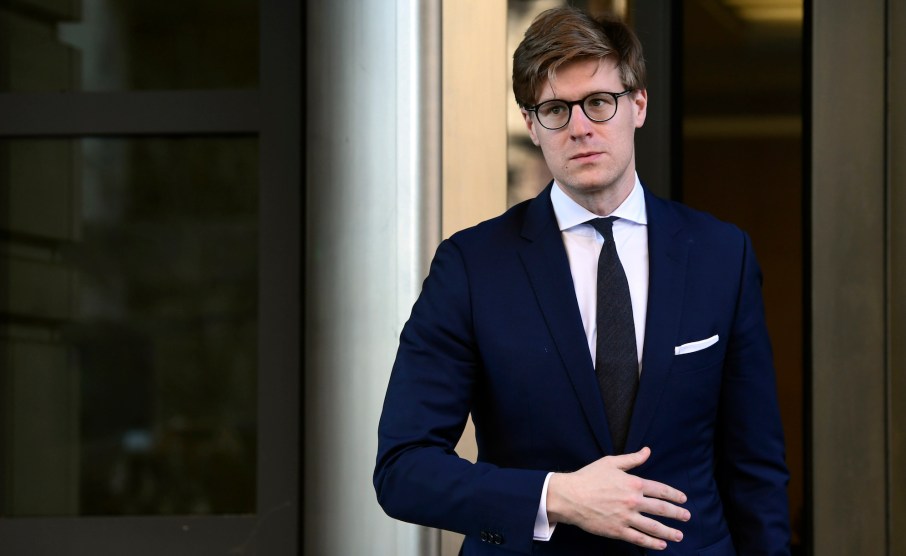 Alex Van Der Zwaan pleaded guilty in Federal District Court in Washington Tuesday afternoon, acknowledging that he lied to prosecutors and FBI agents during a November 3, 2017 meeting. The 33-year-old former lawyer, and the reported son-in-law of Russian billionaire German Khan, is now the fourth person to admit guilt in Special Counsel Robert Mueller’s sprawling investigation into President Trump’s ties with Russia. He joins Michael Flynn, George Papadopoulos, and, most recently, Richard Pinedo, whose admission that he unwittingly helped 13 Russian agents create fake PayPay and other financial accounts was revealed Friday. But Van Der Zwaan, a Dutch citizen and former associate in the London office of massive international law firm Skadden, Arps, Slate, Meagher & Flom, is not exactly a major player in the Trump-Russia drama. Rather, he appears to be a small fish snapped up by prosecutors in a bid to obtain evidence against the president or some of his top associates; the case suggests that Mueller thinks one way to penetrate the inner circle is by continuing to go after undisclosed foreign lobbying.

Van Der Zwaan, a Russian speaker, worked on a report that Skadden produced in 2012 that defended the government of then-Ukrainian President Viktor Yanukovych, a pro-Russia leader, over its prosecution and imprisonment of Yulia Tymoshenko, a political rival. The report by the top-tier law firm was supposedly independent, giving a veneer of legitimacy to  Tymoshenko’s prosecution, which was widely denounced in Europe and the United States. Skadden was brought on to produce the report by Paul Manafort, then a political adviser to Yanukovych. Rick Gates, Manafort’s longtime business associate, oversaw the production of the report. Both men went on to become Trump campaign officials.

After Yanukovych’s ouster by a popular revolution in 2014, Ukraine’s new government began investigating the circumstances of the report. The country’s investigation revealed that Skadden agreed to an unusual payment formula: The firm initially accepted a fee of about $12,000 for the report, less than the amount that required public bidding in Ukraine, Bloomberg reported. The following year, with no new work done, Ukraine paid Skadden about $1.1 million. After the Justice Department questioned Skadden about the payment, the firm refunded $567,000 to Ukraine, saying it had been overpaid.

The firm’s report was one piece of a broader pro-Yanukovych lobbying effort overseen by Manafort and Gates. They also arranged for Ukraine to hire the Podesta Group, a Democratic-leaning lobbying firm, and Mercury Consulting, a GOP-friendly firm, to represent the government’s interests in Washington.

Prosecutors working under Mueller charged Manafort and Gates in October with money laundering and fraud related to their Ukrainian lobbying work. The indictment also alleged that the men’s failure to disclose their lobbying work on behalf of the Ukrainian government violated the Foreign Agents Registration Act, or FARA. Gates is reportedly set to plead guilty this week and cooperate against Manafort.

Andrew Weissmann, a top prosecutor on Mueller’s team, said at Van De Zwaan’s plea hearing Tuesday that the charges against him are part of an investigation into “FARA violations by Paul Manafort, Rick Gates and others.”  Weissmann did not elaborate on the identity of the “others” under investigation.

Weissmann said the defendant made a series of false statements to prosecutors during a November 2017 interview. Van Der Zwaan pleaded guilty to falsely claiming his last conversation with Gates occurred in mid-August 2016 and that his last conversation with an unnamed “Person A” occurred in 2014. In his plea, Van Der Zwaan admits that he in fact spoke with Gates and Person A in September 2016 about the report and possibility that Skadden, Manafort, and a former Ukrainian minister could face criminal charges related to the report.

Person A, who Weissmann said lives largely in Ukraine, appears to be Konstantin Kilimnik, Manafort’s longtime business associate in the country. Prosectors have previously suggested that Kilimnik has ties to Russian intelligence. He also functioned in 2016 as an intermediary between Manafort and Oleg Deripaska, an aluminum oligarch suspected of providing intelligence on the US presidential election to Russian President Vladimir Putin in 2016. In one email Manafort sent while he chaired Trump’s campaign, he told Kilimnik that he was willing to privately brief Deripaska on the 2016 presidential contest. Kilimnik’s involvement appears to further tie Van Der Zwaan’s case to Mueller’s broader investigation.

Prosecutors also charge that Van Der Zwaan told other lies about his role in preparing the report. These include giving a false explanation for why he failed to turn over to his own lawyers and to prosecutors a September 12, 2016 email in Russian from Person A. The email included a request that Van Der Zwaan communicate though an encrypted messaging application called Viber. Weissmann said in court that Van Der Zwaan secretly recorded a follow up conversation in which Person A said the “payments [to Skadden] that were public” were the tip of the iceberg.

Mueller’s team may have prosecuted Van Der Zwaan in part to warn other witnesses. “This charge sends a message to every potential witness in the Mueller investigation—you will be charged if you lie to the FBI,” Renato Mariotti, a former federal prosecutor who’s been tracking Mueller’s probe, tweeted on Tuesday.

The allegations, however, also suggest that Mueller’s investigation into undisclosed lobbying for Ukraine is not limited to Manafort and Gates. This avenue of investigation by Mueller’s team signals continued legal concerns not only for Skadden, but for Mercury and former employees of the Podesta Group, which dissolved earlier this year. Both firms filed under FARA only last year after their work drew media coverage and attention from prosecutors.

The former head of the Podesta Group, Tony Podesta (also the brother of Hillary Clinton’s former campaign chairman John Podesta) and Vin Weber, a former Republican congressman who helms Mercury, have both already been questioned by prosecutors about their work with Manafort. It’s clear now that Mueller is not done looking at the broader lobbying done on behalf of Ukraine.

Van Der Zwaan is expected to receive a sentence of up to six months in prison as result of the plea bargain, according to District Court Judge Amy Berman Jackson. Jackson agreed to an expedited April 3 sentencing date after Van Der Zwaan’s attorney explained that Van Der Zwaan’s wife is expecting to give birth in August. The request, and the government’s agreement, highlighted Van Der Zwaan’s status as a low-level defendant. But his prosecution should certainly not be ignored.