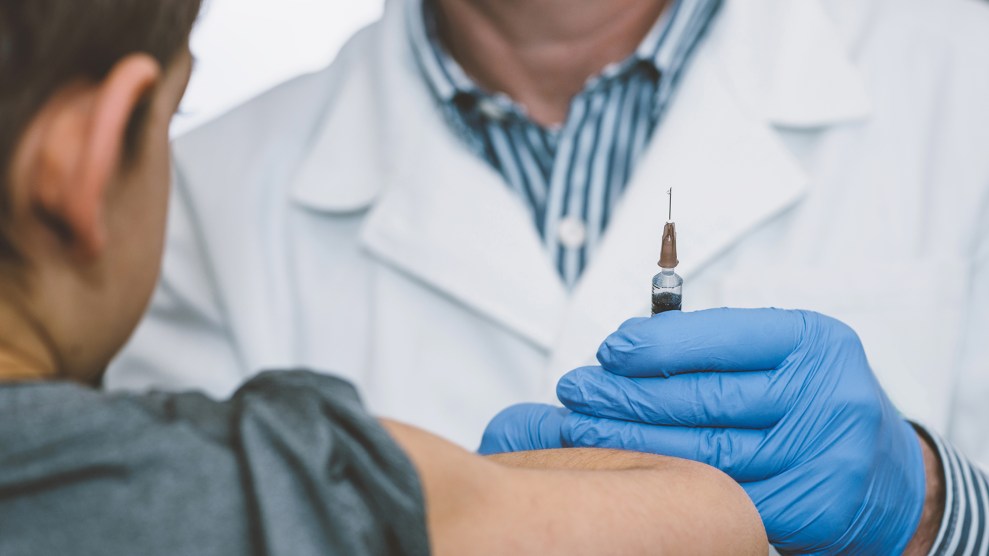 We’re only about halfway through flu season, and the influenza virus has already done a number on the United States. As of Friday, 48 states were reporting widespread illness. According to the Centers for Disease Control and Prevention, at least 53 children had died.

“If we had a replay of the Spanish flu, we’d be hosed,” said one flu expert.

To make matters worse, our flu defenses are strained. Hospitals are packed. In many places, pharmacies are running out of the anti-viral medication Tamiflu. This year’s vaccine isn’t terribly effective against the dominant, nasty, H3N2 strain. Experts still recommend getting the shot, because it covers other strains, too, and also can lessen the length and severity of the H3N2 infection. But people in some areas are finding the vaccine hard to come by.

Our last severe flu season wasn’t long ago—in 2014-2015, 148 children died. The Centers for Disease Control and Prevention, for various reasons, does not report precise numbers for overall flu deaths, but it estimates that from 2010 through 2016 “influenza has resulted in between 9.2 million and 60.8 million illnesses, between 140,000 and 710,000 hospitalizations and between 12,000 and 56,000 deaths annually since 2010.” If we can expect a nasty strain to emerge every few years, and an extremely deadly one to pop up now and again, why haven’t we figured out a better way to defend ourselves?

One reason is that funding for flu research is notoriously paltry. Even though the virus kills tens of thousands of Americans each year, neither Congress nor Big Pharma see it as a priority. “You have a major funding deficit at the federal level, which is really dangerous,” says Michael Osterholm, director of the Center for Infectious Disease Research and Policy at the University of Minnesota. “If we had a replay of the Spanish flu”—the 1918 pandemic that killed tens of millions worldwide—“we’d be hosed.”

“Pharma companies simply won’t pay for research,” Palese explains. “We need a healthy NIH. We rely on it.”

The dearth of research funding makes life difficult for scientists who study flu and depend heavily on government grants. Peter Palese is a microbiologist at New York City’s Icahn School of Medicine at Mount Sinai, whose lab is working to develop a universal flu vaccine for all strains, an accomplishment that would eliminate the guesswork that goes into concocting annual flu shots. (New data suggests that this year’s shot was just 17 percent effective against this year’s most prominent strain.) Although GlaxoSmithKline and the Gates Foundation have invested in the project, the research component is almost entirely funded by the National Institutes of Health. “Pharma companies simply won’t pay for research,” Palese explains. “We need a healthy NIH. We rely on it.”

Anthony Fauci, director of NIH’s National Institute of Allergy and Infectious Diseases, says his agency puts about $30 million a year toward developing a universal vaccine. Increasing that amount, he recently told CNBC, would be a challenge. “When we’ve gotten new money, it’s been earmarked for popular things like the Cancer Moonshot, the BRAIN Initiative, and Alzheimer’s disease,” he said. “So to get new money for universal flu vaccine, I’m probably going to have to shift priorities and take money away from other things.”

W. Ian Lipkin, an epidemiologist who directs the Center for Infection and Immunity at Columbia University’s Mailman School of Public Health, told me the federal grants that support his flu research have been slowly whittled away—even though he is studying questions that affect almost everyone. Last year, for example, his group discovered that in some cases, children whose mothers caught the flu while pregnant may have an elevated risk for autism spectrum disorder. “It’s critical that we continue to invest in this science,” he says. “And yet we’re seeing exactly the opposite.”

Trump himself has expressed skepticism about the flu vaccine. “I don’t like the idea of injecting bad stuff into [my] body.”

Last year, the Trump administration proposed sweeping cuts to the NIH and the CDC. That budget didn’t pass, but public health experts warn that if those agencies shrink in the future—and congressional Republicans will be looking for ways to close the $1.5 trillion shortfall the recent tax bill will create—their work on flu could suffer. “Our efforts in these areas might be impeded,” Fauci told me. “We wouldn’t stop our activity, but it would slow down certain things.”

The administration has sent mixed signals about its stance on flu research. While its proposed budget did include modest funding, Trump himself has expressed skepticism about the flu vaccine. “I don’t like the idea of injecting bad stuff into [my] body,” he said in 2015. “I have friends that religiously get the flu shot and then they get the flu.” (Those friends might actually have been feeling symptoms of the immune response that protected their bodies against a more serious illness.)

As University of Minnesota’s Osterholm pointed out in a recent New York Times op-ed, the Trump administration’s national security strategy “cites Ebola and SARS as potential bioterrorism and pandemic threats, yet makes no mention of the risk of pandemic influenza nor any aspect of critical vaccine research and development.”

Osterholm told me he is worried about the lack of interest in flu research, and he’s worried more broadly about dwindling budgets for the public health agencies that fund it. “You have to have the vision coming out of the administration,” he says, “and we don’t have that right now.”