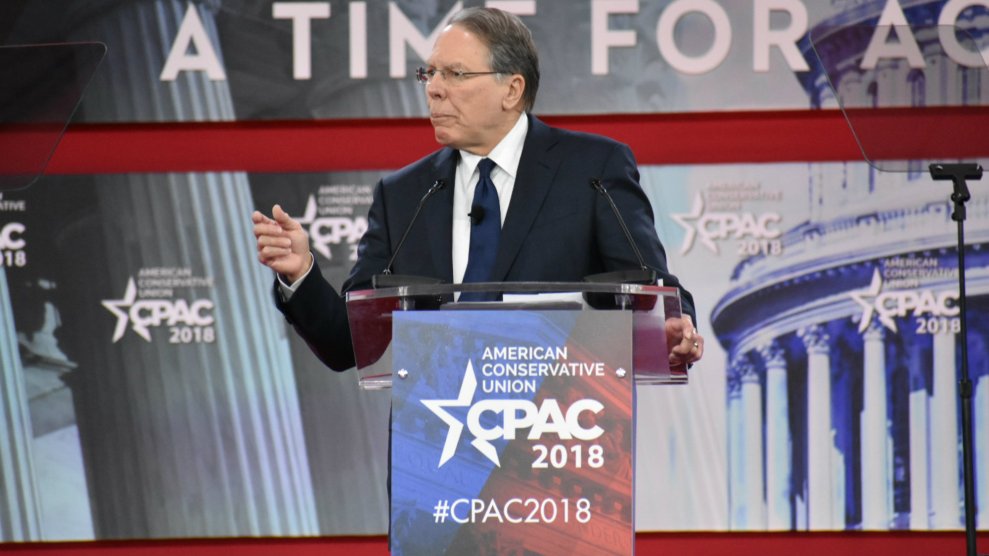 In his first public comments since a gunman killed 17 people last week at a Florida high school, the leader of the National Rifle Association, Wayne LaPierre, went on the offensive Thursday morning, doubling down on the organization’s most strident pro-gun talking points, while heaping criticism on gun reform advocates.

“They want to sweep right under the carpet the failure of school security, the failure of family, the failure of America’s mental health system and even the unbelievable failure of the FBI,” LaPierre, NRA Executive Vice President and CEO, said during his 35-minute long appearance at the annual Conservative Political Action Conference, in National Harbor, Md.

The NRA is a key sponsor of the conference, and until now largely quiet about the Parkland, Fl., high school shooting.

“We share a goal of safe schools, safe neighborhoods, and a safe country,” LaPierre added. “As usual the opportunists waited not one second to exploit the tragedy.”

Rather than gun restrictions, he called for armed security at every school in the country—something President Trump echoed in an early morning series of tweets. “We drop our kids of at schools that are so-called ‘gun free zones,’ that are wide open targets for any crazy madman bent on evil,” he said.

He also called out leading Democrats by name, denouncing Senators Elizabeth Warren, Bernie Sanders and others as “European-style socialists”.

If Democrats take over the House or Senate in this year’s midterm elections, or—”God forbid,” he warned—the White House, “the first to go will be the Second Amendment.”

“Their goal is to eliminate the second amendment and our firearms freedoms, so they can eradicate all individual freedoms,” he said.

The NRA’s appearance comes the morning after a tense town hall-style broadcast on CNN in which student survivors of the Parkland massacre issued withering criticism of NRA spokesperson Dana Loesch, and Florida Republican senator, Marco Rubio.

The is the must-watch video of this moment: teenagers confronting politicians about the dark money flooding and corrupting politics https://t.co/9I5U3bliUv

“Can you tell me right now that you will not accept a single donation from the NRA?” Cameron Kasky, a 17-year-old who survived the Parkland shooting, asked Rubio amid loud cheers.

“The answer to the question is that people buy into my agenda, and I do support the second amendment,” Rubio said.