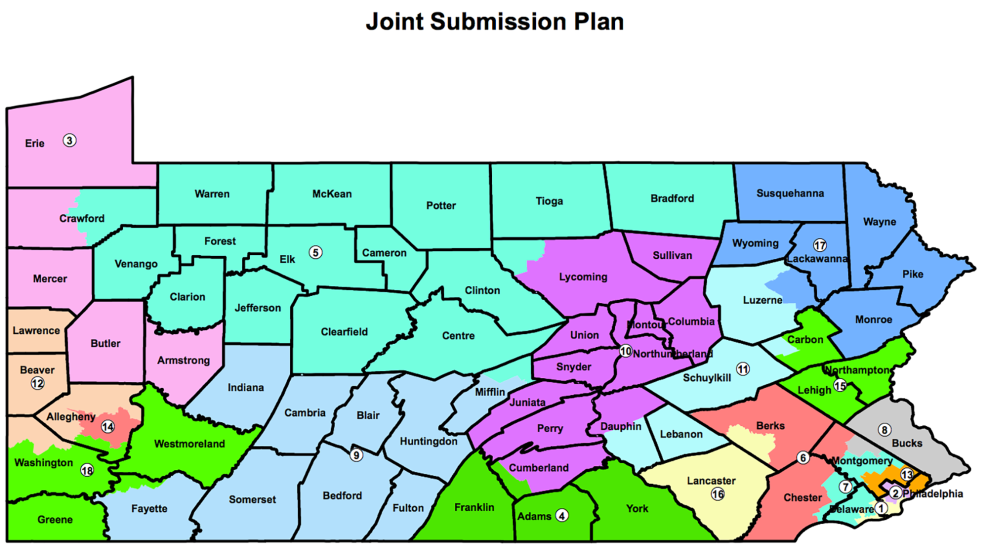 Top Republicans in the Pennsylvania Legislature aren’t giving an inch in the ongoing battle over the state’s congressional map. On Friday, they submitted a new map for the 2018 elections that analyses show is just as gerrymandered as the old one. It would ensure Republicans keep an outsize number of seats in a state closely divided between the two parties. Whatever map is used in Pennsylvania could have a significant affect on who wins the House of Representatives in November.

The Republicans’ proposal is the result of a ruling last month in which the Pennsylvania Supreme Court found the state’s current map an unconstitutional partisan gerrymander. Under that map, drawn in 2011, Republicans consistently won 13 of the state’s 18 congressional seats. The court found that the map deprived voters of fair elections. “An election corrupted by extensive, sophisticated gerrymandering and partisan dilution of votes is not ‘free and equal,'” the court’s opinion states. But the new map would likely have the same result. In 2016, for example, President Donald Trump won 12 of the state’s districts and Hillary Clinton won 6. Under the new proposal, that would likely still be the case.

“An analysis of the data reveals that it is a naked partisan gerrymander, just like the 2011 map,” Daniel Jacobson, an attorney representing parties who have sued over the old map, the League of Women Voters of Pennsylvania and a group of Democratic voters, tweeted Saturday.

Want to see some examples of how PA Republicans’ proposed map accomplishes its gerrymander? Check out how it cracks cities like Reading and Erie by throwing them in overwhelmingly red districts. And how it packs the proposed 13th w/Democrats by carving up Montgomery County pic.twitter.com/ezRnikbgGJ

New York Times elections analyst Nate Cohn came to a similar conclusion. The “big picture is about the same. At just about every opportunity, the GOP map makes subtle (and occasionally not so subtle) choices that add up to a fairly considerable advantage,” he wrote on Twitter.

The map is now on the desk of Democratic Gov. Tom Wolf, who has hired a mathematician to help him evaluate it. It’s unclear if the governor will accept it, or whether there will be a negotiation with the Republican leaders in the Legislature. The governor and the legislature have until February 15 to agree on a new map, as dictated by a court order. If they cannot reach an agreement, the court will create a map. And if Wolf green-lights the map, it’s unclear whether the court would also accept it.

The Pennsylvania Legislature’s Senate President Pro Tempore Joe Scarnati and House Speaker Mike Turzai, both Republicans and parties in the lawsuit, defend their new map as complying with the court’s directions. And in filing their proposal Friday night, they indicated they would not necessarily submit to a court-drawn plan. They noted they have the right to appeal a court-produced map or to pass legislation to replace any map created by the court.

Republicans have gone all out to preserve the 2011 map. They asked the US Supreme Court to intervene and keep the map in place, which the court refused to do. Scarnati and Turzai also tried to get the state Supreme Court’s opinion thrown out over accusations of bias from one of the Democratic justices. That, too, failed. One Republican state representative proposed impeaching the Democratic justices who ruled against the current map. Now, Republicans seem to be hoping that they can use the redrawing process to produce a map that is different but equally as bad for Democrats. What happens next will depend on how the governor and state Supreme Court react.